Find the best deals on 1,950 hotels in Toronto, Canada

Find the perfect Toronto hotel for business or leisure

Things to do in Toronto

How much are hotels near Rogers Centre?

momondo users have recommended 12 hotels to users looking to stay near Rogers Centre. Hotels in this area have an average price of $118 per night. These prices may change based on several factors, such as time of year. Hotels near Rogers Centre are typically 13% less expensive than the average hotel in Toronto, which is $136.

How much are hotels near CN Tower?

The average price for hotels near CN Tower is $118 per night. Of those hotels, momondo users recommend the 12 hotels below for those looking to stay in the area. Since CN Tower is more popular at some times of year than others, prices may vary depending on when you plan your trip. Hotels near CN Tower are typically 13% less expensive than the average hotel in Toronto, which is $136.

How much are hotels near Scotiabank Arena?

Search for hotels in these Toronto neighborhoods

When to book a hotel in Toronto

Let us help you with the best tips about Toronto

Located north of Lake Ontario, Toronto experiences warm, sunny summers, and often, severe winters. The peak tourist season is from June – August when average temperatures of 60 – 70 degrees Fahrenheit are accompanied by a host of cultural events, street festivals, open patio dining, pedestrian markets, and ideal conditions to enjoy water-based activities. If you wish to explore the city when the crowds are smaller, temperatures are pleasant and room rates are reasonable, time your visit between April – May or September – October. You can enjoy the fresh spring blooms or the magical fall colors if you visit during these months. To get the best deals on hotels and travel, pack a warm jacket, hat, gloves and boots to head to Toronto between November – March. Average temperatures hover around 20 – 30 degrees Fahrenheit. Winter months welcome their share of fun activities such as ice skating, skiing and festivals such as ‘Cavalcade of Lights’ in November and the ‘Winterlicious’ culinary fest in January.

Downtown Toronto is easily explored on foot, and most of the popular attractions are within walking distance of each other. To cover longer distances, rely on the efficient public transport operated by Toronto Transit Commission (TTC), including buses, subway, streetcars, the and Downtown Express. Cash single fare for any TTC transit is $3.25 CAD per adult while a 1-day pass allowing unlimited 24-hour travel across all modes of TTC operated transport costs $12.50 CAD. Children 12 years and younger ride free. Taxis can be hailed on the streets and they usually operate within Downtown Toronto. If you are traveling to the suburbs, you may need to pre-book a local taxi service. Uber and Lyft also operate in the city but watch out for surge pricing during peak times. If you plan to explore the neighboring satellite towns within the Greater Toronto Area (GTA), consider renting a car to drive around. Check for attractive deals on car rentals with momondo.

How much does a hotel in Toronto cost per night?

Hostels and cheap hotels in Toronto

These hotels and hostels are the cheapest accommodations available in Toronto

Get the best value hotel in Toronto

Where to stay in Toronto

Best places to stay in Toronto

At first glance, Toronto appears to be just another big city, an attractive commercial and financial center with a glittering skyline. But as you look beyond that, you will find one of the most culturally diverse cities in the world. 53% of the residents are immigrants who speak over 140 different languages and dialects. Toronto’s neighborhoods are also a reflection of their ethnic diversity, and each area consists of several unique smaller districts.

Westside is a trendy neighborhood that combines Little Portugal, Liberty Village, the entertainment district of Queen Street West, the West Queen West area and Chinatown. This area features some of the hottest pubs and clubs, and an eclectic mix of gift shops, cafés, and restaurants. Indulge in a stay at the chic Thompson Toronto hotel that offers ultra-luxe rooms with floor-to-ceiling windows, and spectacular views of the Toronto skyline. On Queen Street West, the Drake Hotel offers comfortable rooms designed with a mix of modern artistic and vintage charm. The hotel also features a great restaurant, and several bars and lounges where creative mixologists and renowned live musicians draw nightly crowds, making it one of the most happening social hubs in the city.

Eastside comprises Little India and Greektown with their great culinary repertoire, The Beaches area with its casual restaurants, laidback pubs and safe, swim-worthy beaches, and the Leslieville area known for its indie boutiques and cafés. Check out the airy rooms at The Broadview Hotel, a 126-year-old landmark hotel set in a redbrick building amid cafés and restaurants in the Eastside neighborhood. For a mid-range budget option, consider the Days Inn Toronto East Beaches on Queen Street East, a 10-minute walk from Woodbine Beach.

Toronto city center is a busy and buzzing neighborhood that is home to the Financial District and the Yonge Street corridor. Stay in this neighborhood if you are in the city to broker a power deal, to catch a Broadway-style show, or to enjoy some prime shopping areas. Opposite Union Station, in the heart of the city center, enjoy luxury accommodation in the historic and award-winning Fairmont Royal York hotel on Front Street West. A 5-minute walk from the Hockey Hall of Fame, you can consider the chic studios and 1-bedroom suites at One King Street West Hotel & Residence, an elegant hotel set in a grand Beaux-Arts-style building on King Street West.

The Queens Quay strip, and the miles of waterfront along the Harbourfront Centre offer a dynamic mix of parks, restaurants, shopping, arts and culture, all connected to the Water’s Edge Promenade. In a modern brick and glass building, just a 5-minute walk from the CN Tower, you can enjoy the bright, contemporary rooms at the Radisson Admiral Hotel Toronto – Harbourfront on Queens Quay. Further down on Harbour Square, consider The Westin Harbour Castle, Toronto hotel set in a waterfront high-rise, a short walk from Air Canada Centre.

Toronto offers a generous dose of attractions and entertainment, hence, the dollars you save on budget-friendly accommodation can be used to explore the city. In the lively Queen West neighborhood, stay in simple rooms at The Rex hotel that boasts a delicious breakfast, and foot tapping music at its live Jazz and Blues bar. Near Ryerson University, you can look at the clean basic rooms of Alexandra Hotel. Enjoy cozy and comfortable rooms in the 1909-dated Hotel Victoria, Toronto’s 2nd oldest hotel, just a 2-minute walk from the King station subway stop. Consider the bright, contemporary rooms and suites in Bond Place Hotel – Eaton Centre, a minimalist hotel set near the Yonge-Dundas Square, just steps away from the Toronto Eaton Centre shopping mall.

What to do in Toronto

A multicultural city that offers a wide range of activities and attractions, Toronto has so much to see and do, that it is possible to discover something new each time you visit. Your Toronto itinerary promises to be filled with a generous mix of art and architecture, weekend markets, live games, shows, concerts, cultural events and festivals.

How long do people stay in Toronto?

3 nights is the typical length of stay for people visiting Toronto.

How much does a hotel cost in Toronto?

$107 per night is the average rate for a room when booking a hotel in Toronto. Prices will differ depending on factors such as star rating, time of year and location.

When is the best time to book a hotel in Toronto?

Room prices for hotels in Toronto can be as much as 25% lower in the month of January. So this is a great time to book and save money.

Which day is cheapest to stay in Toronto?

At the moment the cheapest day to stay in a hotel in Toronto is Saturday, with Monday being the most expensive.

How much does a hostel in Toronto cost?

Hostels in Toronto (including hotels rated 2 stars and below) costs $70 per person, per night on average. This is a $37 per night cheaper than the average cost of hotels in Toronto.

Based on the weather in Toronto, what attractions are popular during March?

If you’re looking to stay at a hotel in Toronto during March, it is important to know that the average temperature is 32 °F and there is a low chance of snow with just 2.1″ of precipitation expected. Great places to visit near Toronto in March are North York Ski Centre, Blue Mountain, and Horseshoe Valley.

Learn more about these user-preferred hotels in Toronto 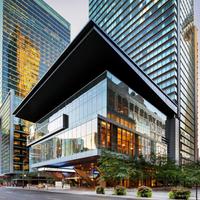 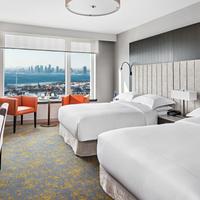 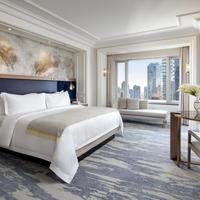 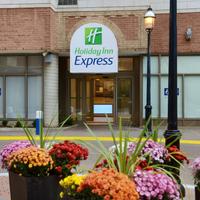 Start planning your trip to Toronto

Not set on Toronto? Search the best deals on hotels in these destinations