This budget hotel offers good value for money, and is only a five-minute stroll from Whyte Museum of the Canadian Rockies and Banff Park Museum. It is close to the area's attractions and is within walking distance of Banff Railway Station. There are a range of facilities available to those staying at Mount Royal Hotel, including a library, a Jacuzzi and a sauna. In sunny weather, an outdoor terrace provides an ideal place to relax. Mount Royal Hotel has 135 charming rooms that are filled with a variety of essential amenities to ensure guests have a comfortable stay. The hotel has its own on-site restaurant, convenient for those who prefer to eat in. In the evening, guests are invited to wind down in the comfortable lounge bar. Guests can also try one of the many bars and cafés in the local area. Mount Royal Hotel provides easy access to The Banff Centre and Mt Norquay. The local area is also well-known for its shopping.

How does Mount Royal Hotel compare to other 3 star hotels in Banff?

How far is Mount Royal Hotel from Calgary?

If there is no traffic, the 67.4 mi drive between Calgary and Mount Royal Hotel should only take about 3h 22min. If your hotel is in a more metropolitan area, you may see the driving time increase due to traffic.

What is the best way to get to Mount Royal Hotel from Calgary?

Mount Royal Hotel has parking available on site for customers of the hotel. With that in mind, the most efficient way to not only get from Calgary to the hotel, but also around Banff during your stay may be renting a car. Car rentals in Banff are on average $31/day. If you’re looking for a simple travel option from Calgary to Mount Royal Hotel, consider calling a taxi or rideshare service to take you to the hotel as well as around the city during your visit.

Are there food options at Mount Royal Hotel?

Does Mount Royal Hotel have a pool?

Judging by our data, Mount Royal Hotel does not have a pool on site, but hotels regularly make additions and changes to their venues and do not always notify us. It would be best to call Mount Royal Hotel at +1 403 762 3331.

How close is Mount Royal Hotel to Banff city center?

0.1 mi separate the front steps of Mount Royal Hotel and the city center of Banff where you can keep busy with restaurants, shopping and of course Canadian Ski Museum West, a very popular landmark in Banff.

What is the phone number for Mount Royal Hotel?

164 yd away
Whyte Museum of the Canadian Rockies
Museum 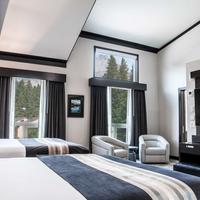 Get the latest Banff flight insights

Experience Banff from behind the wheel! Learn more about the best car rental deals here

Get to Banff by train as an alternative to flying. Learn more about the best train deals here.