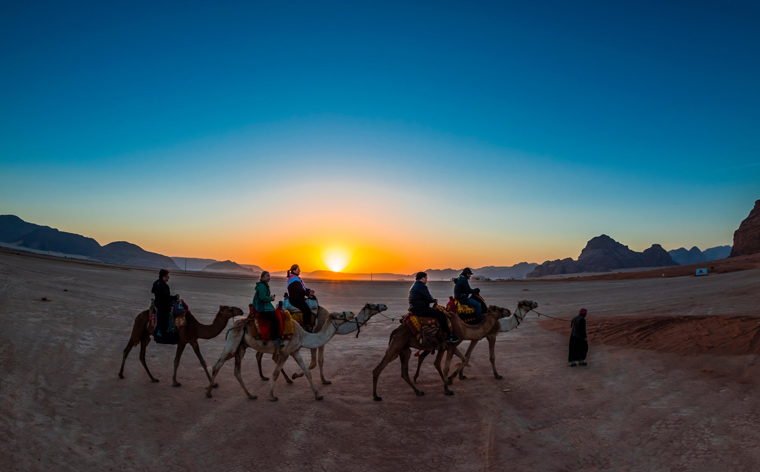 DiscoverNatureGood day sunshine: 18 of the most beautiful sunrises in the world

Like an early start to the day? Grab a coffee and explore that red desert sunrise or a sunrise at Angkor Wat with our list of the 18 most beautiful sunrises in the world

Wake up early and embrace the morning in Jordan

A stunning sunrise can make a morning person out of even the most determined night owl. From a chilly Arctic sunrise to a fiery desert sunrise in Jordan, we’ve put together our top 18 destinations for viewing the most beautiful sunrises in the world.

Set the alarm clock, get up early, and seize the first rays of the day. 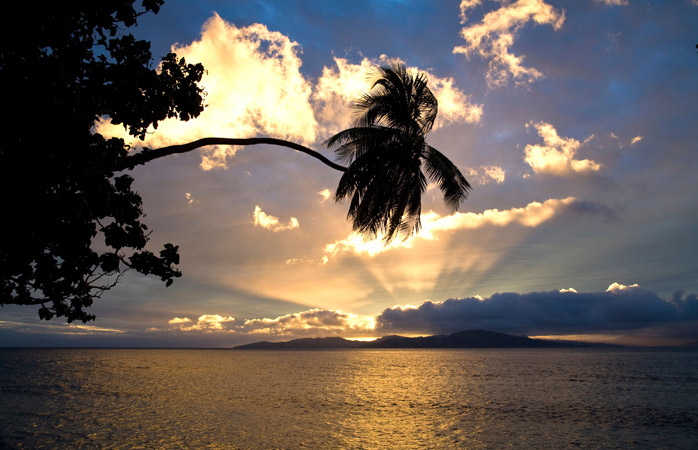 Smack-dab on the 180-degree longitude line, Fiji is one of the first spots in the world to see the sun rise every day. The pristine Taveuni Island (aka Garden Island) sets the perfect backdrop for a sunrise, with rainforests and desert beaches hidden from civilization. As the red hues of the sun disappear into daylight, dive under water to see the palette of red, orange, and pink soft coral splashed along the reefs.

Find a flight to Nadi 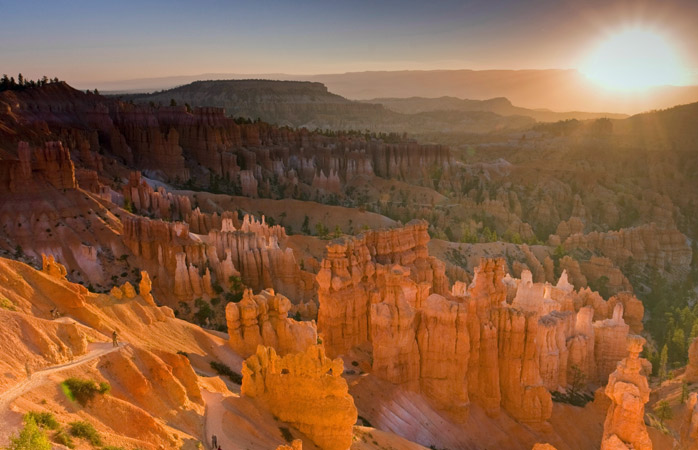 Featuring the world’s largest collection of hoodoos – wind-eroded sandstone formations – Bryce Canyon resembles a series of rocky skyscrapers from afar. Take in the new day with the vantage points offered by the Rim Trail, or head to the aptly named Sunrise Point for striking views of the entire canyon. It’ll be busy, but there’s enough room that you won’t have to jostle for space – just try to find a spot with a view over the western side of the canyon.

Find a flight to nearby Salt Lake City 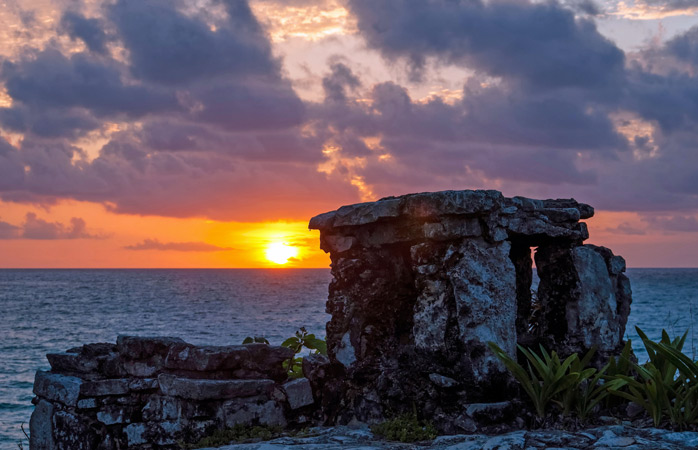 The City of Dawn greets the morning in Tulum

In this case, no need to set an alarm in Tulum, just follow the sun worshippers that gather at the shoreline daily to watch the sun rise. The coastal oasis of Tulum draws spiritual travelers year-round to watch the sun break past the horizon in front of the cliff-side Mayan ruins of Zama, the City of Dawn. Take a second to rip your eyes away from the ocean sunrise to see, behind you, the morning light paint El Castillo temple’s ruins in light orange hues.

Find a flight to nearby Cancún 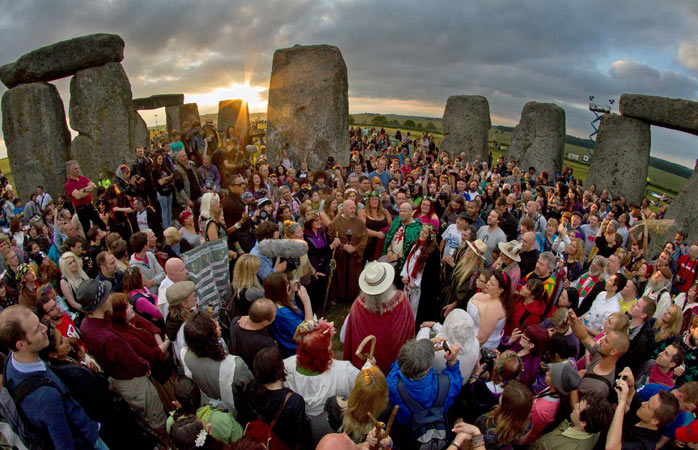 Druids and pagans celebrating the Summer solstice at Stonehenge

What better place to view a sunrise than a monument widely thought to have been built to celebrate the sun? Book ahead if you want to be able to walk within the perimeter of this ancient stone circle – and get there as early as possible to take in the changing light. Every sunrise at Stonehenge is breathtaking (if the weather allows), but there’s nothing like the sunrises of the solstices, when the sun lines up perfectly with the massive stone trilithon.

Find a flight to nearby London 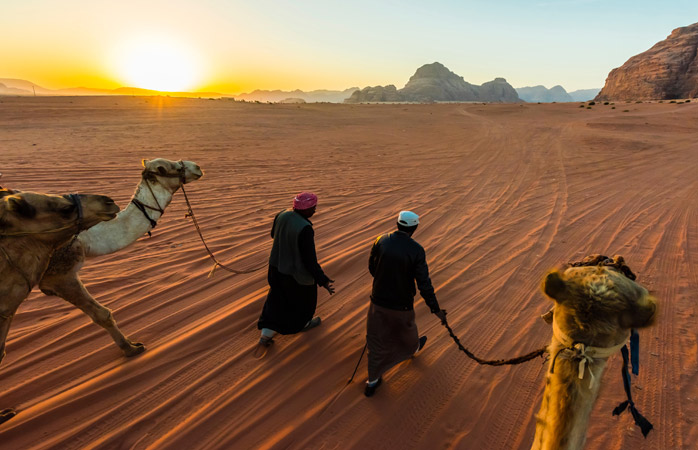 All red sand and rock formations, Wadi Rum resembles Mars so closely that a film where Matt Damon goes on a mission to the Red Planet was filmed here. Explore the sandstone and granite valley in a four-wheel drive or on camel-back, and watch the sands and looming rock formations turn pink and purple as the sunrise paints the sky. If early morning travel isn’t your thing, consider bivouacking (camping sans tent) for the night – the starscape over the desert is otherworldly.

Find a flight to nearby Aqaba 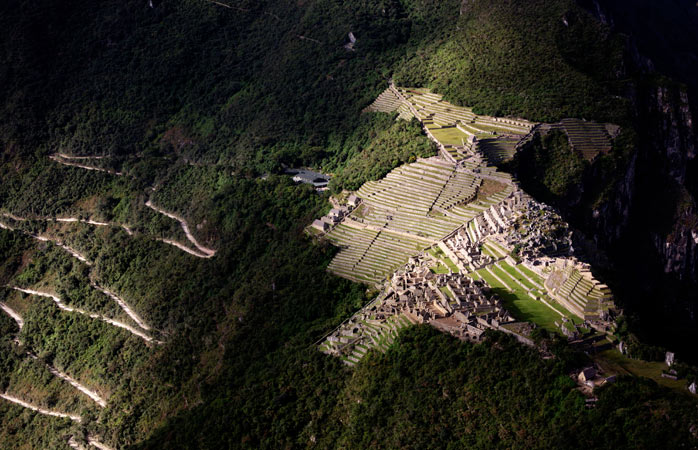 A sunrise here is like no other, but you’ll have to cross your fingers that the sun creeps out from behind the clouds. Overcast mornings are common, so be patient and wait for the grey skies to dissipate: seeing the sun’s rays slowly reveal this historic stone city and its surrounding snow-capped mountains is part of the joy.

Inca Trail hikers – and let’s face it, most visitors here are – will generally reach the Sun Gate of Machu Picchu and its famed views on the fourth day of their trip, but you can also venture pretty close up by bus from the nearby town of Aguas Calientes.

Find a flight to nearby Cuzco 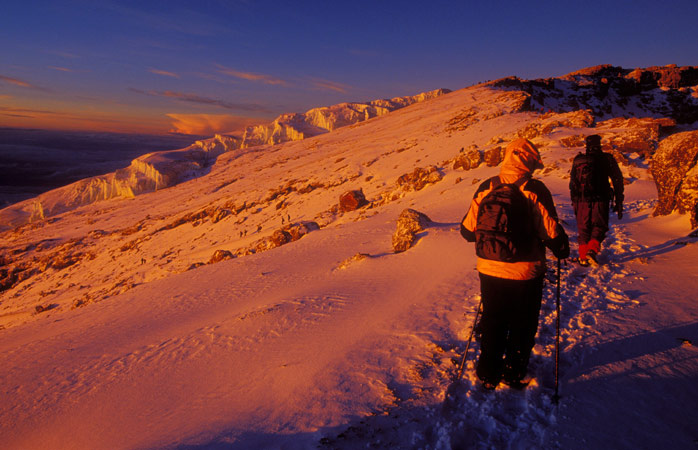 Wake up with Africa’s highest sunrise view on Mount Kilimanjaro

Climbing Mount Kilimanjaro is an enormous undertaking that comes with a chance to see one of the most enchanting sunrises in the world. At Barafu Camp, your ascension starting in the middle of the night, you’ll hike towards the summit to the rhythm of the rising sun. Soak in the panoramic view of endless clouds of pink and purple, interrupted only by the jagged landscape below.

From Kili’s summit – 3.6 miles above sea level, about 7 times taller than Burj Khalifa in Dubai, the tallest building in the world – dedicated souls can reflect on their ascent amidst an unparalleled sight.

Find a flight to Kilimanjaro 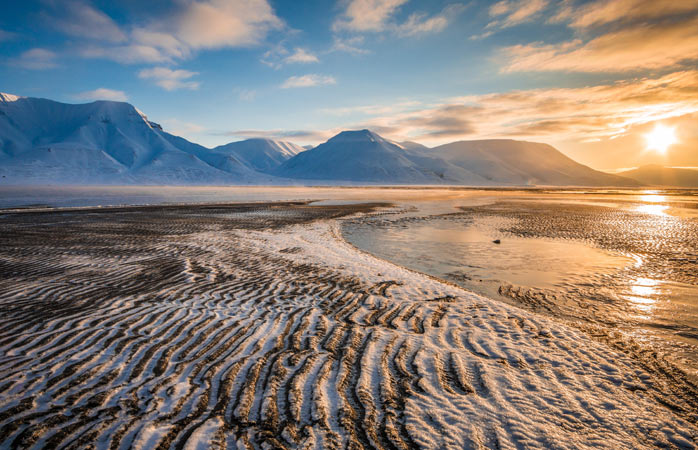 Neither sunrise nor sunset during the eternal summer days in Svalbard

Although not quite a sunrise, nor a sunset, there’s no sun like a midnight sun. Between May and August, Svalbard experiences a perpetual dawn, with the sun hovering darkly at the edge of the world. Yellows and reds are in abundance, and you’ll find that the colors around you are heightened – and shadows dramatically stretch and loom.

The sky changes dramatically as light reflects off the cloud coverage, making a midnight swim or glacier trek a truly memorable occasion.

Catch a connecting flight from Oslo, the closest international airport.

Find a flight to Longyearbyen 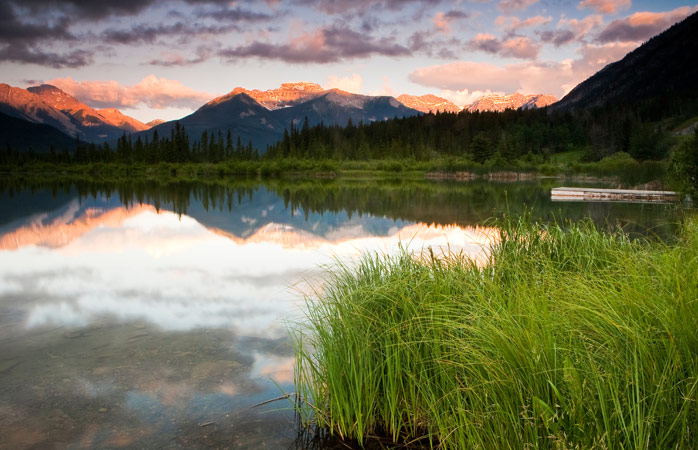 The mirror-like sunrise over the Vermilion Lakes

For a jewel-like sunrise, head to the Vermilion Lakes. Perfectly clear and pristine, they reflect the rising sun in perfect mirror image – and all against a stunning snow-capped Mount Rundle backdrop. On a good morning the sky bursts with vivid oranges, reds, and pinks – and so do the icy patches beneath. It’s definitely one of the most beautiful sunrises in the world.

Find a flight to Calgary 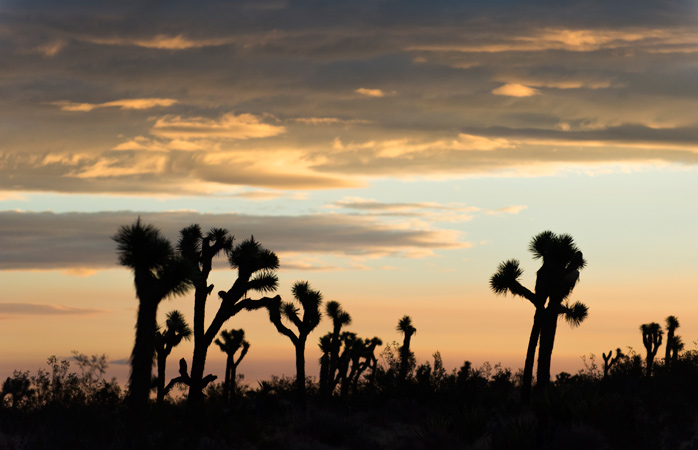 Characterized by the strange-looking greenery that gives this Californian desert destination its name, Joshua Tree National Park is a must-visit for photographers. Its rock formations and bizarre trees give it an alien sensation – and the desert sunrise only adds to it. The dawning sun casts the Joshua trees into memorable silhouettes that make for gasp-inducing snapshots, so find a strategic spot for your tripod and let the show begin. Other morning wonders in the park include the Cholla Cactus Garden and Arch Rock – which is also striking beneath the star-studded night sky.

Find a flight to nearby Los Angeles 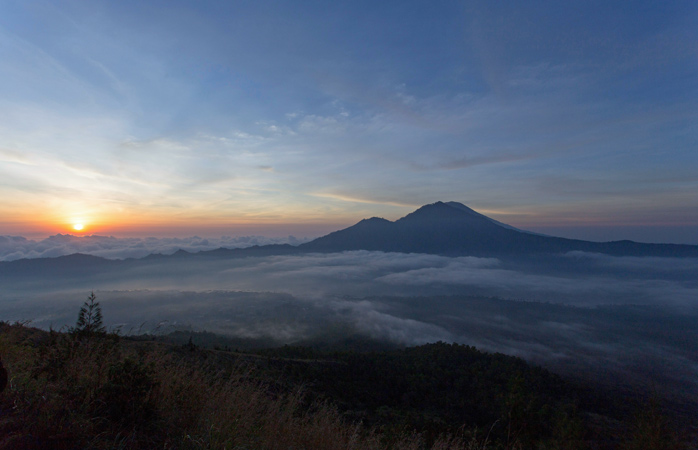 Never climbed an active volcano in the chilly pre-dawn? Here’s your chance. Bali’s Mount Batur is a shrub-smothered volcanic beauty in the shadow of the massive Mount Agung. A trek to its summit is worth it for the yellow-swathed dawn views of the surrounding caldera and the lake at its foot. Group hikes are the way to go, and you’ll need a reasonable level of fitness and patience, as it takes a couple of hours to get to the top. Visit during the dry season of April-October.

Find a flight to nearby Denpasar 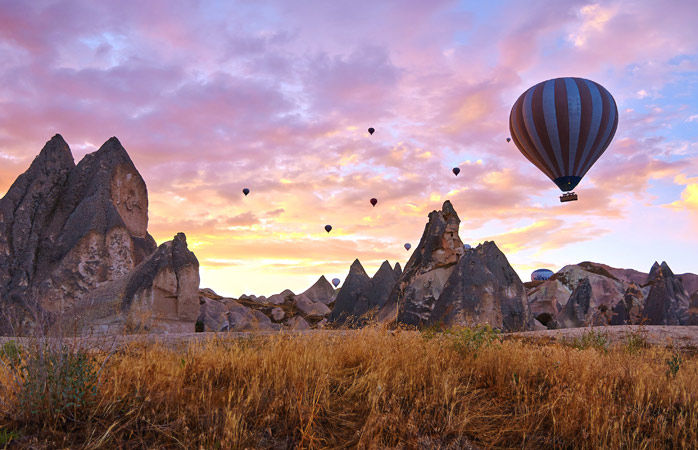 Arid and rocky, Cappadocia is a startling moonscape in Turkey’s Göreme region. It might be best known for its dozens of ancient villages carved into the local bedrock, but the area’s passion for early morning hot air ballooning makes sunrise here a colorful excursion.

Wake up in one of Cappadocia’s cave hotels, grab a thick Turkish coffee, head up the town’s winding streets to the viewing area, and watch the balloons climb into the sky with the dawn sun. Better yet, book a balloon flight and enjoy a sunrise from above, the chimney rock formations below.

Book a connecting flight from Istanbul, the closest international airport.

Find a flight to Kayseri 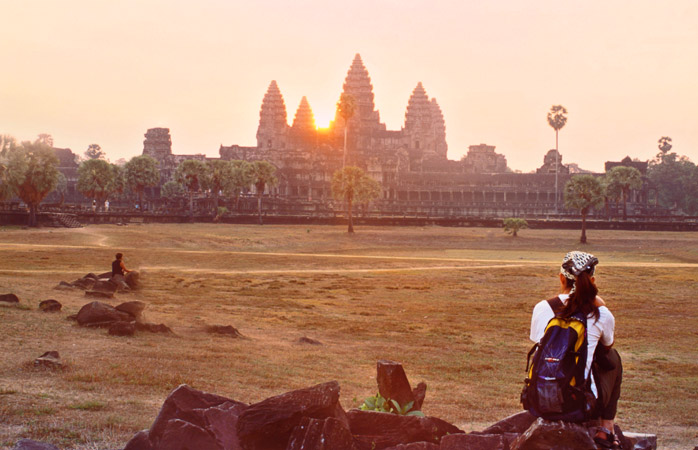 Away from the crowd, admire Angkor Wat bathed in the sun’s first rays

The largest religious monument in the world, Cambodia’s magnificent Angkor Wat is a sight to behold. And the crowds agree: they gather by the thousands for a sunrise at Angkor Wat. Bypass the throngs of tourists with a daybreak visit to this iconic site, and marvel at the intricately carved temples and shrines – there are more than 100 – as the sunrise casts them in pastel light.

Even at dawn there’ll be crowds, so head to the east side of the complex for more serene viewing.

Find a flight to Siem Reap 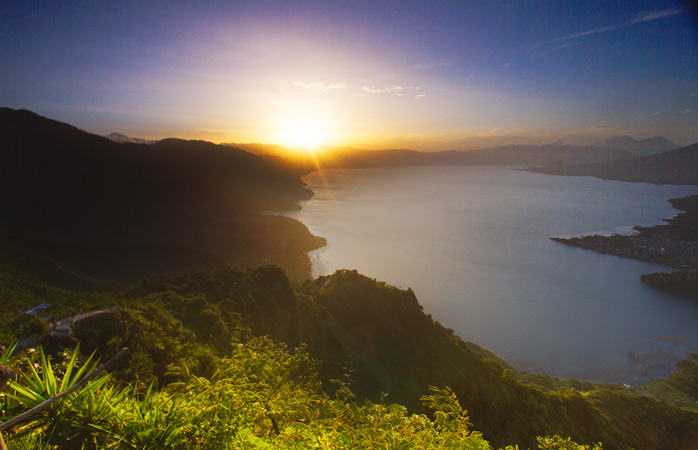 Wake up to the rays shining over Lake Atitlan in Guatemala © indii.org/Lawrence Murray

Grab your hiking boots and trek the almost 1.9-mile mountain face, which leads to a rocky outcrop dubbed the Indian’s Nose. It’s a site sacred to the Ancient Mayans, and when the pastel notes of sunrise spill over the horizon, you can see why. A flat mesa at the top features benches and a viewing platform perfect for snapping shots of the cloud-smothered Lake Atitlán, while the nearby San Pedro volcano provides a majestic backdrop for any selfie.

Find a flight to nearby Guatemala City 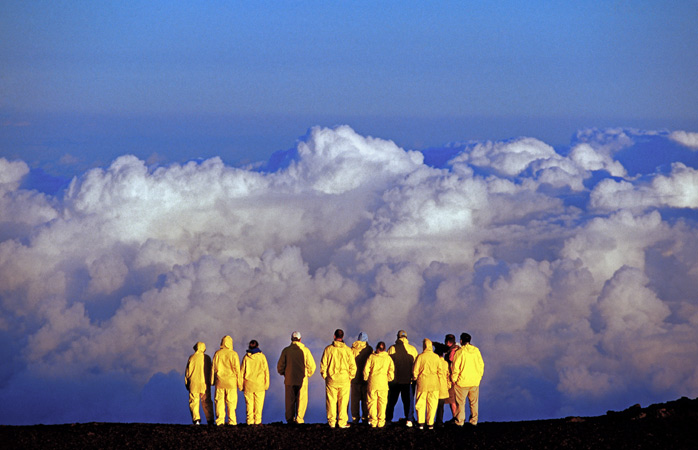 The perfect view before a bike ride down from the Haleakala crater (weatherproof gear mandatory!)

For the glory of this sunrise, the alarm-clock acknowledgement is worth it. Awaken slowly as you watch the sun peak out from above the clouds, on the top of the Haleakala volcano. Although Haleakala means ‘house of the sun’, the temperatures near the crater can reach below 32°F with a bone-rattling wind chill, thus the necessity for astronaut-like weatherproof gear.

Various van tours offer the trip through Haleakala National Park in Maui, dropping them off to see the event from the summit around 5am. Skip the coffee and get your adrenaline fix biking the 24.8-miles down the mountain, back to sea level.

Find a flight to Maui 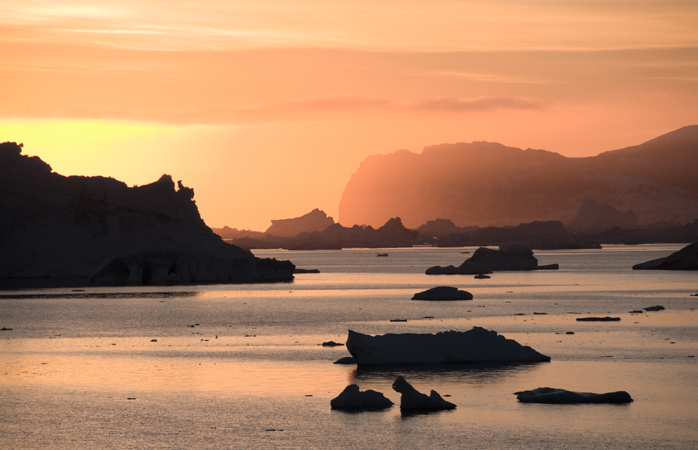 Just you, the floating glaciers, and the most silent sunrise across the Antarctic Sound

Barren and frigid, Antarctica is like no other – and the same is true of its hard-earned sunrises. As summer breaks, months of wintry darkness finally give way to a January sunrise that paints the craggy glaciers and slick ice in striking reddish-pink pastel hues. You may even get to enjoy a relatively warm day of -4°F or so. 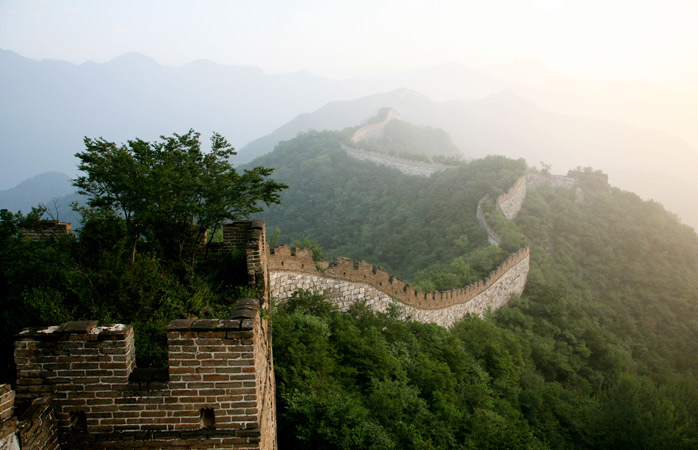 There’s no better time to snap a shot of the Great Wall than in the early morning during sunrise. The light is at its best, and the crowds are at their thinnest. From a good vantage point you’ll be able to pick out the wall winding through the countryside among the tree-smothered mountains. Certain areas are better than others – try the quieter Mutianyu or rugged Simatai spots rather than the reconstructed, tourist-friendly Badaling area.

Find a flight to nearby Beijing 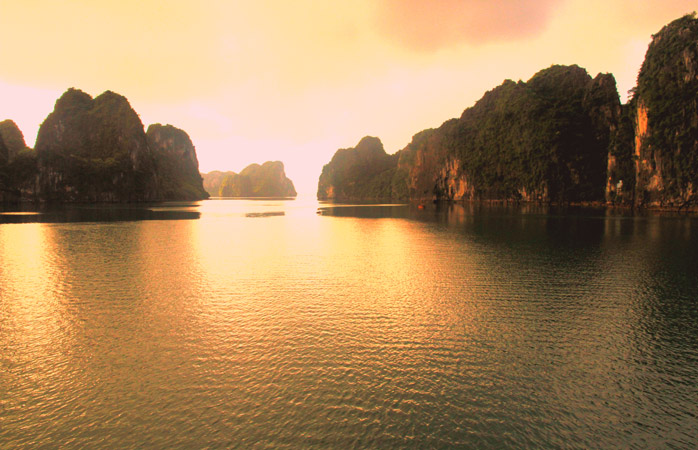 About a 4-hour drive east of Hanoi, Ha Long Bay is a maze of oddly shaped limestone karsts reaching up from the water. Tiny floating villages emerge from the fog that hugs the water’s surface, while the rainforest-topped islets make for striking silhouettes. Sea kayak tours and multi-night junk boat excursions abound, making it easy to capture the glow of the morning sun while sitting on the bay’s emerald waters. For a fog-free northern Vietnam sunrise experience, visit in November.

Find a flight to nearby Hanoi

Looking for more inspiration? Check out Brazil’s fascinating underground wonders or reconnect with nature at these relaxing remote hotels

DiscoverNatureGood day sunshine: 18 of the most beautiful sunrises in the world