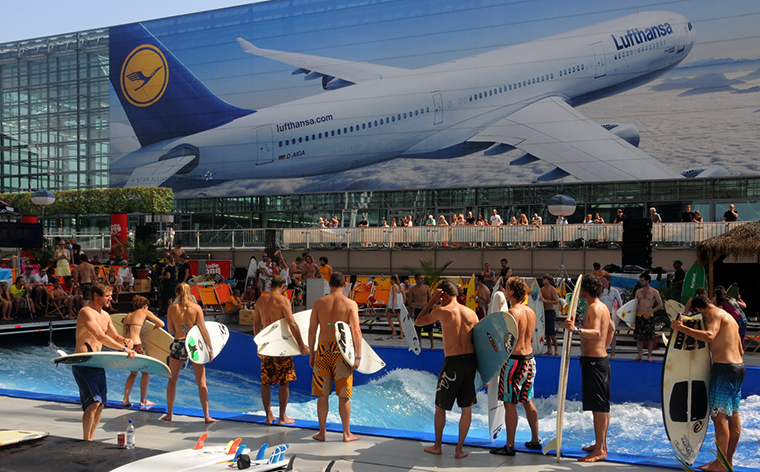 DiscoverCitiesFly in to the best airports in the world

Delayed flight? Not a problem in these amazing airports from around the world that are so good you might not even want to leave the terminal!

We’ve got something to declare – we love airports! Start the holiday fun early – or finish things off in style at any one of these amazing airports! 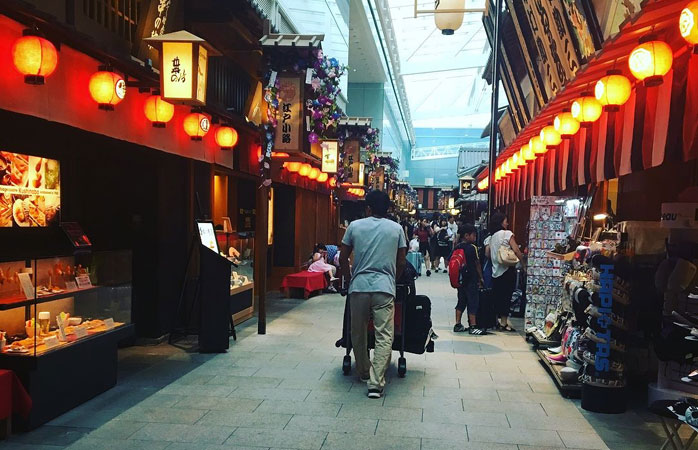 If there’s one airport that will keep you entertained for hours, it’s Tokyo’s Haneda Airport. Get your fill of anime, manga and character paraphernalia at the airport’s very own Tokyo Pop Town and Hello Kitty Japan shops. If you’d like some company, rent a mini-robot at the Global Wi-Fi counter on the 2nd floor. These pilot-dressed tour guides will give you tips on what to see and do. They speak Japanese, Mandarin and English. There’s also over 20 Japanese and Edo-inspired restaurants serving traditional cuisine from the historical Edo period (between 1603 and 1868) in the airport’s Edo Market. Here, you can grab a green tea and a bowl of authentic udon noodles, or browse through the shops for local ingredients and cosmetics to take back home with you. If you have some time, head to the observation deck in Terminal 1 to sample the airport’s very own craft beer, the Haneda Sky Pale Ale. 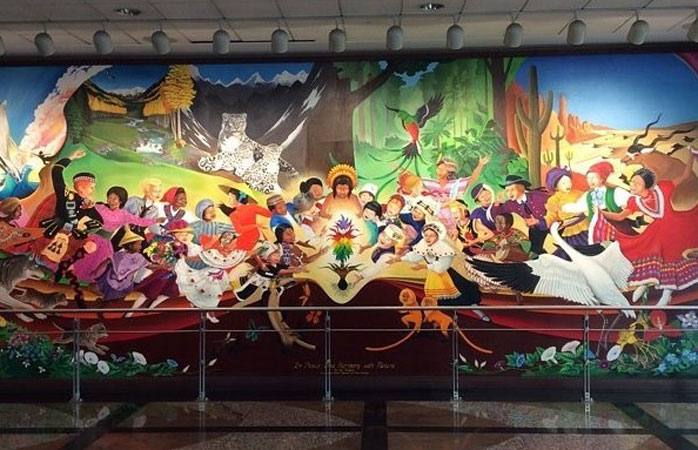 When it comes to sustainability, Denver International Airport is one of the greenest airports around. But perhaps what it’s most known for is the many conspiracy theories that have surrounded the airport since construction started in 1995. Rumor has it that there are hidden bunkers and tunnels underground, built to house the VIPs of the world in case anything catastrophic should happen. Many people also believe that the airport is the headquarters of a secret organization called the New World Order. We’ll let you decide. Conspiracy theories aside, DEN does have one of the most extensive collections of public art among airports worldwide. The permanent art and temporary exhibitions feature statues and murals by acclaimed artists such as Luis Jimenez, whose apocalyptic paintings and famous mustang sculpture are said to predict the end of the world. Not creepy at all. 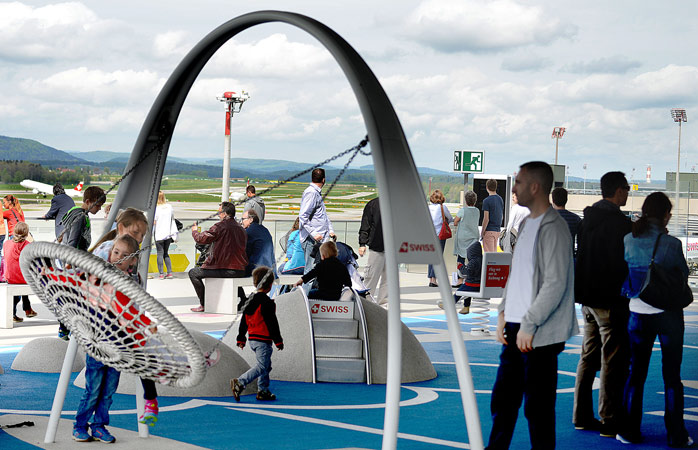 Clean, efficient and well-organized – what’s there to complain about? Always prepared for any emergency, travelers can find on-site medical and dental offices, a vet and even an emergency passport office in Zürich Airport. Out of energy? Take a nap at the Transit Hotel, which offers comfortable single, double and multi-bed rooms at hourly rates. You can also rent out a reclining chair in the rest room, complete with lockers. Alternatively, you can train at the Airport Fitness Facility or take advantage of its spa and sauna services. If you’re traveling with children and it just so happens that your child’s birthday falls on the day you are passing through Zürich, you can even book a birthday party at the airport. It includes a trip to the observation deck, a guided airport tour, cake and even a small gift. You really can have your cake and eat it too. 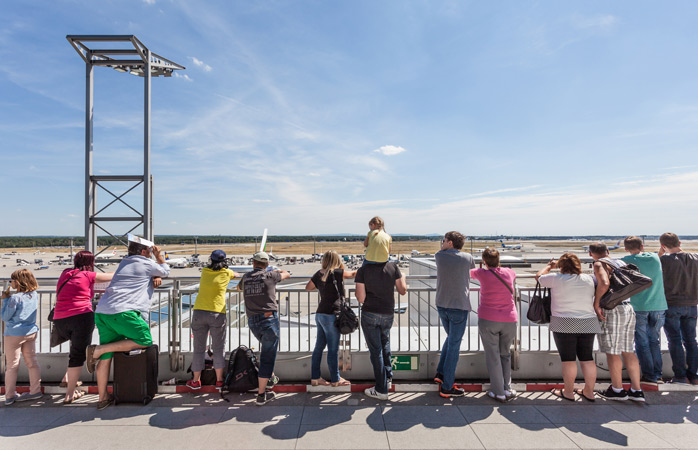 The 12th busiest airport in the world and the 4th busiest in Europe, it’s very likely that you’ll end up passing through Frankfurt Airport at some point in your life. But if not, you can always opt for one of the fun and educational tours of the airport, which range from mini 45-minute tours to extensive, 90-minute tours. If you do find yourself passing through the Frankfurt Terminal 1, the Airport City Mall includes creative eateries and fast-food restaurants, as well as a hair salon, dry cleaners and even a grocery store. There is also an airport casino if you want to blow some money during your layover. 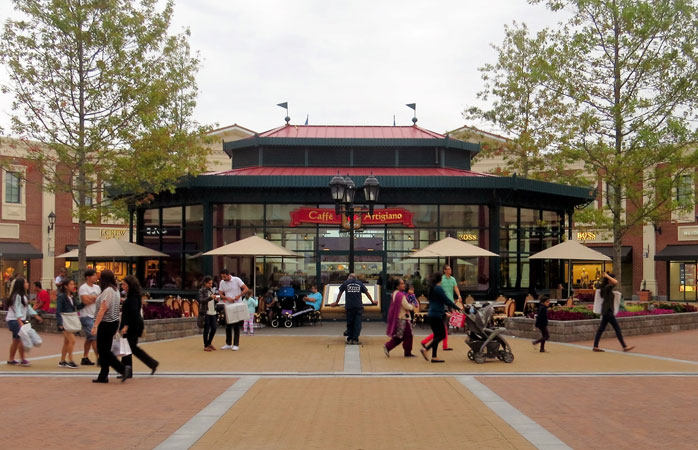 It might not be the first thing that comes to mind when you think about Vancouver International Airport, but it’s actually a great place for reading and studying in a quiet environment. It’s open 24 hours a day and its free and reliable high-speed internet is easily accessible throughout the terminals. Maneuvering around the airport itself is hassle-free, thanks to the over 400 Green Coats volunteers. They are available to help answer any questions and ensure a great experience at the airport. There’s nothing like those friendly Canadians! For those who like to treat themselves at the airport, there’s the Absolute Spa on Level 1 of the Domestic terminal, which specializes in anti-jetlag services. Continue the luxe life with a trip to the McArthurGlen Designer Outlet Vancouver Airport, a ritzy shopping destination where premium and lifestyle brands can be up to 70% off. 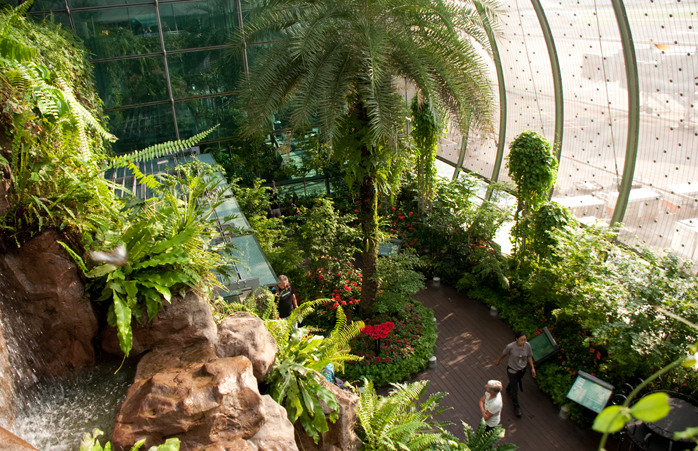 Winning the award as “The World’s Best Airport” three years in a row, Singapore Changi is so amazing that it makes the other airports jealous. Sprawled out over three huge terminals, travelers can keep themselves busy with a dip in the rooftop pool, a wander through the butterfly garden or catch a movie in the 24-hour free cinema. There’s even a “Social Tree” where you can share your favorite photos and videos from your travels with the rest of the world. Last call at the boarding gate? Not a problem here. Terminal 3 has a four-story high slide – the largest in all of Singapore – that will see you whizzing down to catch your flight in no time. 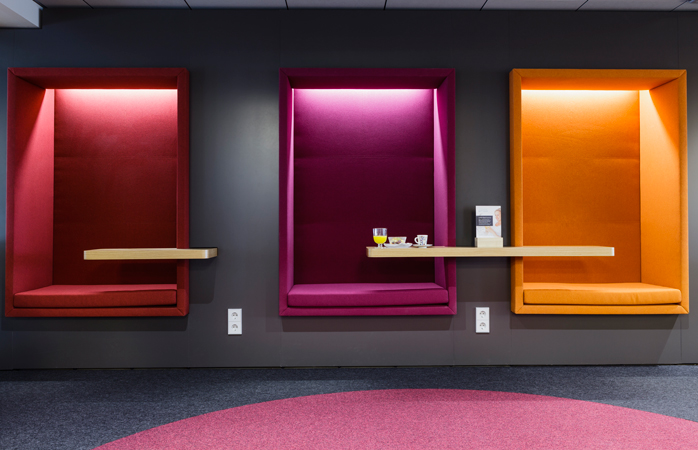 The landing point for most people arriving into Finland, Helsinki Airport doesn’t shy away from highlighting its Finnish-ness and finesse. And no, we don’t just mean its official Moomin Shop. First of all, there’s the classic Finnish sauna inside the premium lounge allowing travelers to derobe and detox. Then you can relax in the swanky Aspire Lounge, replete with typically classy Finnish furniture and art installations from only the most promising local artists. But, the most impressive thing about Helsinki Airport is not in its patriotic trinkets but its ability to put the travelers’ comfort and peace of mind first. For however long you’re cooped up here, don’t forget to visit the book swapping station and the Aviation Museum, or sign up for a free yoga or pilates class. 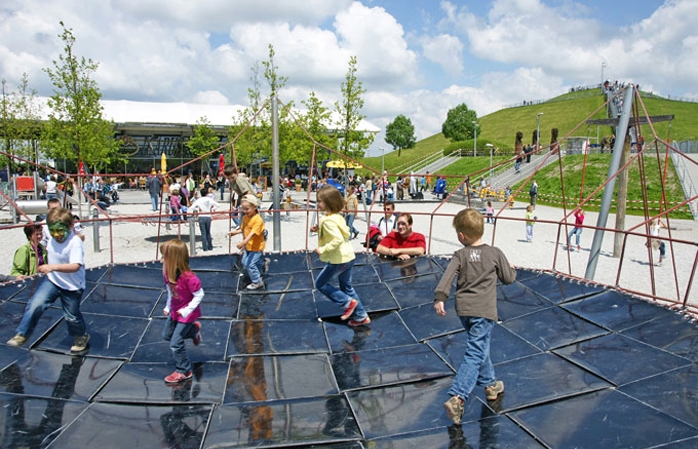 One big problem with a longer-than-desirable airport layover is how to keep the kids happy. If only there was a space where they could run riot in a playground filled with climbing frames, catch a sideline view of the landing strip from an observation deck, or play a round on a mini-golf course… Well, you can do it all at Munich Airport’s Visitors Park. This huge outdoor space is great for travelers looking to escape the stuffy terminal building. And, if you’re travelling during the summer, you can even sign-up for free surfing sessions on the park’s wave machine. Want to cool off with an ice cold brew or chow down on a bratwurst? Housing over 50 bars and restaurants, you can get a taste of Bavaria without ever having to leave the airport. Time flies when you’re having fun. 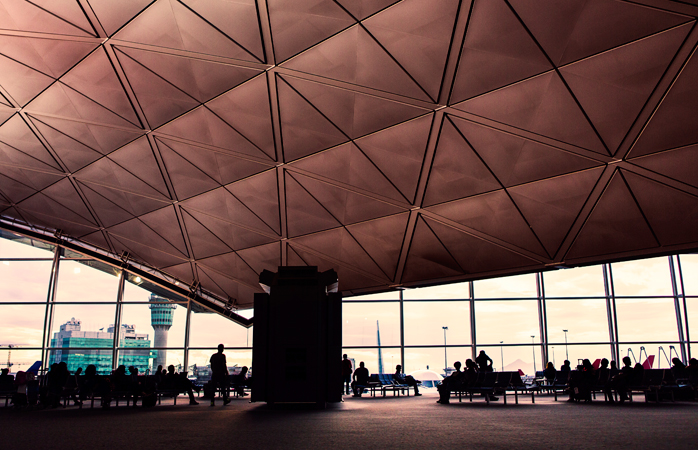 The space-age styled Hong Kong International is a suitably bombastic airport for ‘the Pearl of the Orient’. Built on its very own island just 30 minutes away from the city center by train, the airport’s list of amenities include a nine-hole golf course, the largest IMAX cinema in the whole city and an iSports gym with a computer-simulated basketball court. Don’t be surprised if you stumble across a pop-up art exhibition dedicated to local legends Bruce Lee and Jackie Chan either. 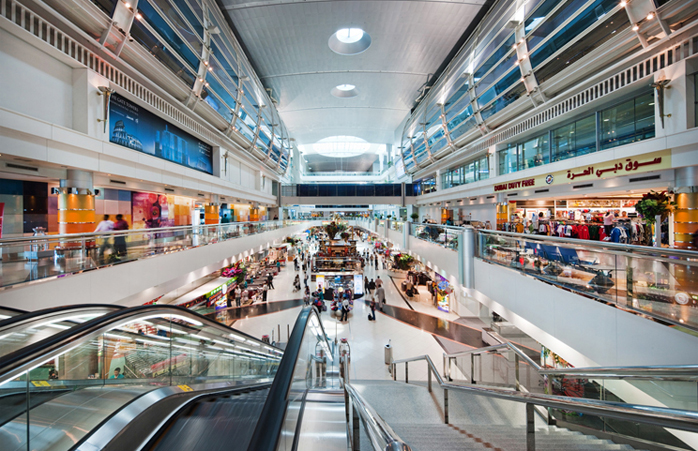 A fittingly extravagant airport for the self-proclaimed ‘City of Gold’, at first glance, you might mistake Dubai International for a shopping center. But, like the city itself, there’s much more to the world’s busiest airport for international travelers than designer boutiques and jewelers selling nuggets of actual gold by the actual kilo. Arrive in good time before your departure to experience the indoor oasis of the “Zen Gardens”, sleep in the comfy “Snoozecubes” or get pampered at one of the eight luxury lounges.

It’s the most modest entry on of our list, but Las Vegas’s McCarran Airport offers a perfect introduction/fond farewell to Sin City. Spend time (and your bank balance) during a long layover by one of the 1,234 slot machines dotted throughout all three terminals, often right next to the boarding gate. Then take your winnings and treat yourself to a beer-battered fish and chips in Terminal 3’s edition of the locally revered family restaurant chain, The Village Pub. Viva Las Vegas!

Opened in 2014 and costing a reported $16 billion to complete, Hamad International may be the new kid on the airport block, but it has quickly built a reputation for being loud, proud and downright flamboyant. Beyond housing a public mosque, two hotels, squash courts, 70 retail outlets and a rooftop swimming pool, it’s the more eccentric offerings that make this one-terminal airport worth visiting. At the peak center of the terminal you’ll be greeted by a 23-foot teddy bear impaled by an even bigger desk lamp. This installation from Swiss sculptor Urs Fischer is just one of 28 international art pieces to be found at the airport, which also include a robot dinosaur and a playground shaped out of large metal stick-men. 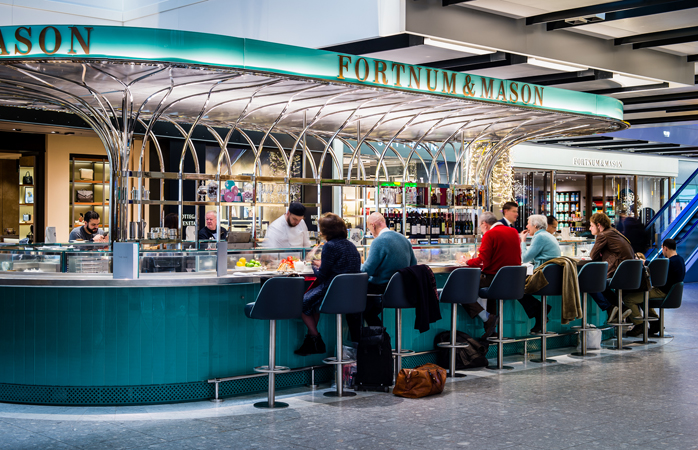 London Heathrow has come a long way in keeping its 74 million travelers per year satisfied, mostly through their stomachs. And, it’s all down to Heathrow’s Terminal 5, where the gastronomic fare is on the menu. This foodie haven features restaurants created by Britain’s two most established, Michelin-starred chefs, Heston Blumenthal and Gordon Ramsay. No time to stop and munch? Ramsay even offers his very own take on ‘Plane Food’ with a wallet-friendly, three-course packed lunch that you can take on-board with you. But, for those craving something really royal, there’s always the toasted crumpets and caviar served at the Champagne Bar from London’s legendary department store favored by the monarchy, Fortnum & Mason.

Don’t let its futuristic facade and synthetic ice skating rink fool you – Seoul’s Incheon International, South Korea’s largest airport, is all about tradition and national pride. The star of the show is the Museum of Korean Culture, which cobbles together an impressive collection of garments, slab prints and instruments spanning a 5,000 year timeline. Outside the confines of the exhibition, you’re likely to find Korean culture come alive with royal procession re-enactments and performances in a mix of musical styles from traditional Sanjo chamber music to K-Pop.

If you’re heading to Wellington, the chances are that you’re also a bit of a Tolkienist. New Zealand’s second most populous city and its beautiful surrounding nature were pushed into the limelight after being used as a central filming location for both The Lord of the Rings and The Hobbit franchises.  And now, when you touch down in Wellington – or “Wellywood”, if you’re so inclined – don’t be alarmed if you’re greeted by a Gollum statue at Passport Control, or Smaug flying above your head in the duty free shop. Apart from all the Middle Earth memorabilia, Wellington Airport is also famed for its impressive architecture and design. The award-winning international terminal, aka “The Rock”, features a tough, cocoon-like exterior, which contrasts to the wood-paneled warmth of its cozy departure lounge – the perfect relaxation spot before an inevitably long international flight back home.

Ready for your next vacation? Don’t forget to pack the top travel gadgets to help you make the most of your travels!

DiscoverCitiesFly in to the best airports in the world
FacebookTwitterLinkedInWhatsApp