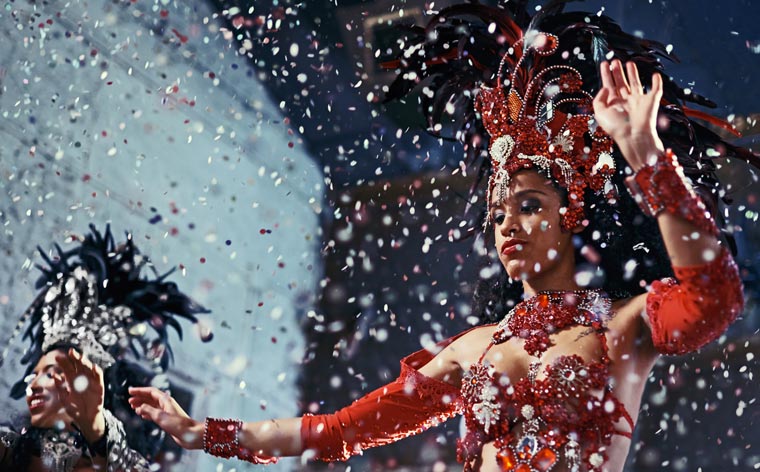 DiscoverCities12 of the best carnivals in the world

Colorful parades, obscure costumes and flamboyant parties that blaze a trail through the evening - here are some of the best carnivals in the world. Get your costumes ready!

Rio De Janeiro's emblematic carnival is a vivid, intense spectacle that dates back hundreds of years

Regarded as a rite of passage from darkness to light, winter to summer as well as a celebration of fertility, carnivals have etched themselves into folklore for centuries now. And while the origins of carnivals may be a debatable affair, their ability to create delirious, unforgettable experiences for all is not.

Don that quirky carnival outfit, say yes and let yourself loose on the streets for a few days of merrymaking – here are the best carnivals in the world. 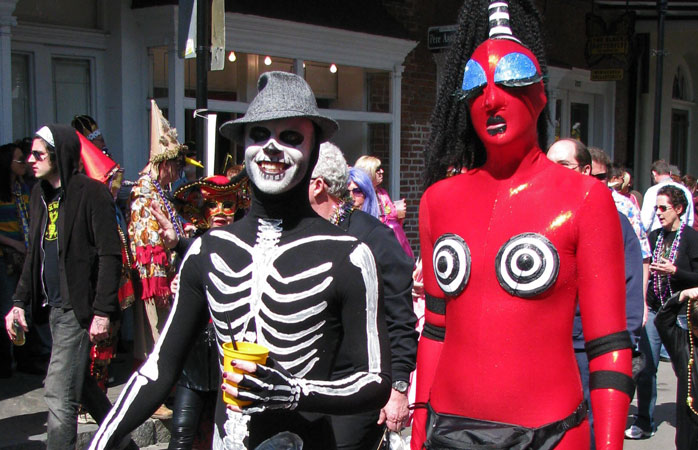 At Mardi Gras, eccentric costumes are the order of the day © Carnaval.com Studios / CC BY 2.0

Mardi Gras, or Fat Tuesday, has its roots in European traditions of the 17th and 18th centuries within the House of Bourbon (a royal dynasty). Long gone are the days when Mardi Gras used to be a fest for the privileged few – today, it is an accessible jamboree that reels in old and young to the streets in great numbers. More of the same can be expected in 2018, as it celebrates its 300th birthday.

Costume-wise, anything and everything goes – so don’t shy away from sporting your most obscure attire. Bring a bag to hold all the motley such as beads and cups that will be tossed your way by the passing floats (elaborately decorated platforms).

Find a flight to New Orleans

The Carnival of Venice – Venice, Italy 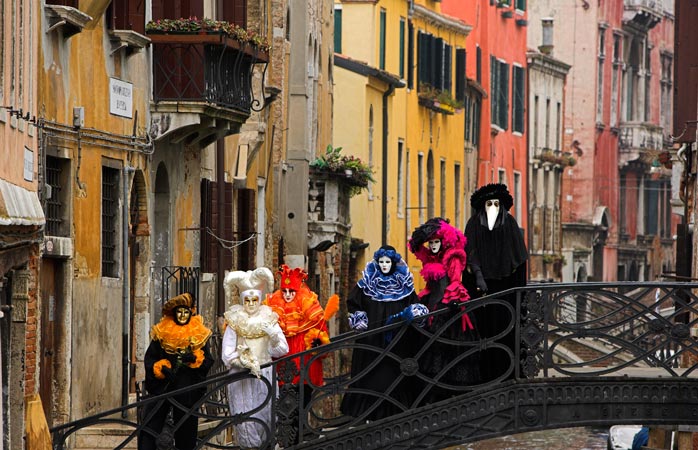 A golden oldie on the scene, the Carnival of Venice is said to have roots in a celebration by the Venice Republic commemorating its victory over the Patriarch of Aquileia in 1162. The festivities have evolved a great deal since then, though mask-wearing traditions are still a central component, many of which have become synonymous with carnival symbols the world over.

It is said that the porcelain masks were first worn as a revolt against class hierarchy as far back as the 13th century.

Take your pick from mask variants such as the Bauta, the Colombina and the Medico della Peste and head out to the streets and canals for a unique experience of Venice.

Find a flight to Venice 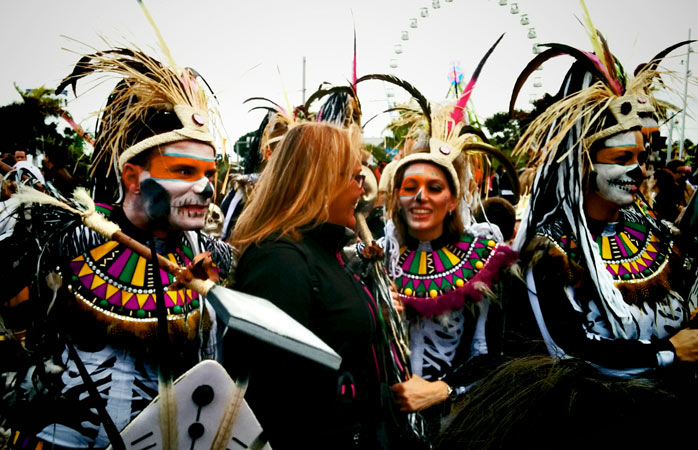 A fiesta among fiestas – Tenerife’s carnival takes reveling to the next level © Jose Mesa  / CC BY 2.0

Though Tenerife hosts countless fiestas every year, none of them come close to emulating its carnival. Widely considered the second most popular carnival after Rio’s event, the Carnival of Santa Cruz de Tenerife has been splashing the capital of the Canary Islands in swathes of color for centuries now.

15 days of vivid extravagance turn the city into one big colorful party, as a gala to elect the carnival queen, satirical hymns and unparalleled bonhomie dominate the proceedings.

While you’re in Tenerife, flip out our guide to Tenerife’s sights, food and culture. 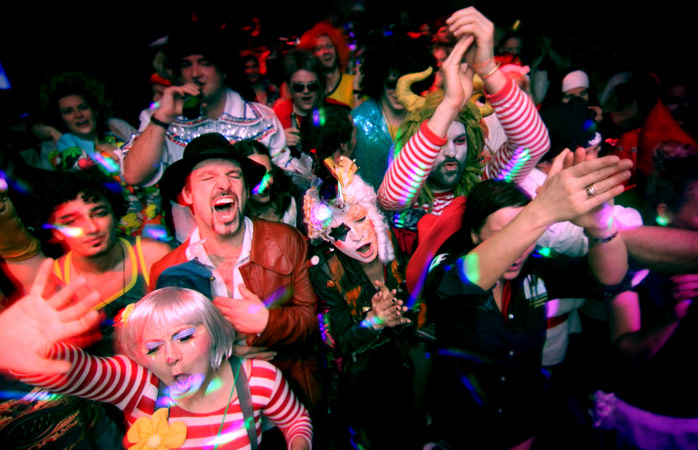 While Cologne’s carnival season (affectionately termed the ‘fifth season’) officially began on November 11 ,2017 at 11:11am, the main event comes along in February each year. Kick off your Cologne Carnival on Friday February 8, 2018 with Women’s Carnival Day, a time in which the women of the city wear fancy-dress on their way to work, followed by masked balls and parties by night.

The carnival features more fanfare and gaiety as the weekend kicks in, reaching its peak as the parade on Rose Monday (also known as Shrove Monday) comes to town. This sprightly march through Südstadt (the southern part of Cologne) features an array of elaborately adorned floats from which items such as chocolate boxes, sweets and other trinkets are thrown into the merry masses.

Find a flight to Cologne 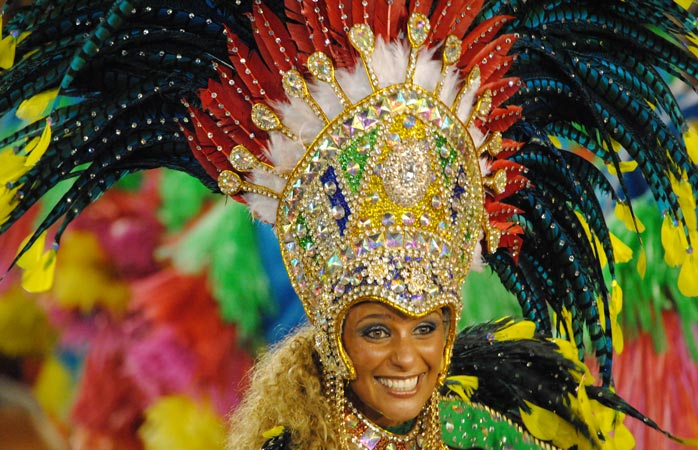 Rio’s monumental carnival showcases the city in all its splendor © Leandro Neumann Ciuffo / CC BY 2.0

The jewel in the crown among the world’s many carnivals, Rio’s mammoth event dates all the way back to 1723 and draws over two million people per day. Samba music is at the center of the revelry, with over 200 samba schools (social clubs that represent a neighborhood) vying for their share of the spotlight in the many colorful parades.

Get a seat at the Sambodromo (the Samba Drome) for a ringside view of the action or suit up and hit one of the numerous street parties in different parts of this reverberating metropolis. Brazil also hosts several other prominent carnivals across the country. While you’re here, check these amazing Brazilian carnival destinations beyond Rio.

The Carnival of Oruro – Oruro, Bolivia 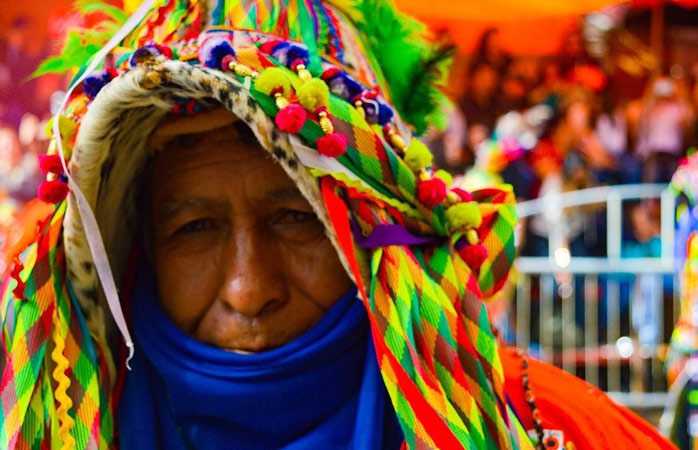 Once an indigenous celebration, this fest has now evolved into a celebration with a strong connection to religious symbolism in the form of Pachamama (Mother Earth) and Tio Supay (God of the underworld). These two icons form the backdrop for the festival, which features a “dance of the devils” ritual, La Diablada, that represents the triumph of good over evil.

Sporting a plethora of folkloric myths, legends and curious traditions, this carnival is apt at distorting the norms of everyday life as one knows it in these parts. Rest up from the shenanigans by spending a few extra days in Bolivia, where alpine salt flats, lakes and riveting landscapes await.

Find a flight to Cochabamba 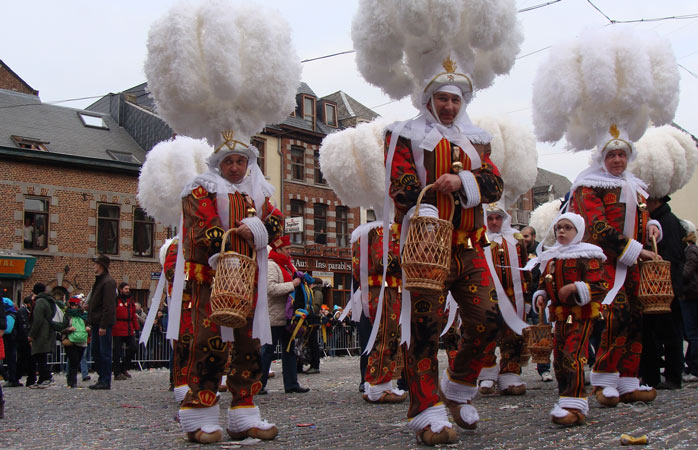 Weird and wonderful costumes galore – the Carnival of Binche offers plenty of amusement for carnival goers © ines s. / CC BY 2.0

Unesco termed the Carnival of Binche “a masterpiece of the oral and intangible heritage of humanity” in 2003, a testament to its unique character. While Belgium hosts several other carnivals around the same period, Binche stands out with its obscure performers (known as Gilles), orange-throwing events (deemed to symbolize good luck) and other curious practices.

There are contested opinions as to the origins of the carnival. One popular theory contends that one of the Gilles of the 14th century was of Incan descent and wore a costume whose exotic appearance gave it resounding local popularity thereafter. This may explain the large feathery hats worn by the Gilles of today … or not.

Find a flight to Brussels 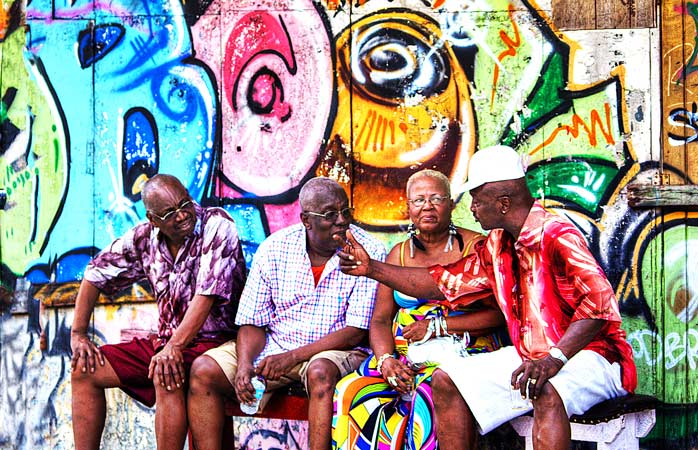 Join the residents of Port of Spain in a bright, festive jamboree at the Trinidad and Tobago Carnival © Mark Morgan / CC BY 2.0

The vigor and flair of the Caribbean take center stage at Trinidad and Tobago’s annual carnival – a swashbuckling display that starts at 4am on the first day (J’ouvert) as revelers gather for what once was a rebellion against slavery.

Step into your carnival costume, treat your tummy to some of the delicious grub sold from roadside vendors and nod your head to the melodic rhythms of the many steel pan bands on the streets. Give yourself a few days of rest once the mayhem subsides in Port of Spain, with a trip to nearby Tobago, where pristine waters and sedate beaches offer a welcome respite.

Find a flight to Port of Spain 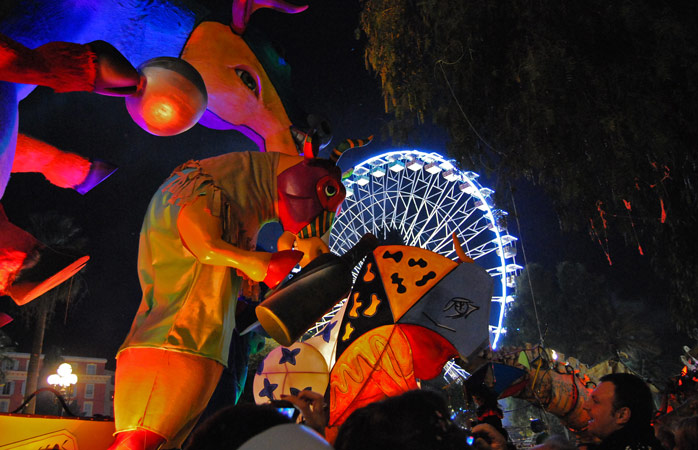 Six carnival parades, 17 floats and thousands of dancers and musicians from all over the world – the Nice Carnival is a vibrant party with a rich heritage. Be sure to check out the flower battles (Bataille de Fleurs) while you’re here. This elegant parade draws numerous caravans of flower-covered floats to the streets, much to the delight of the swarms of onlookers. Catch one of the bouquets thrown from the floats for good measure!

Strap in for a carnivalesque voyage towards new frontiers at the 2018 Nice Carnival, which will feature a futuristic space theme.

Find a flight to Nice 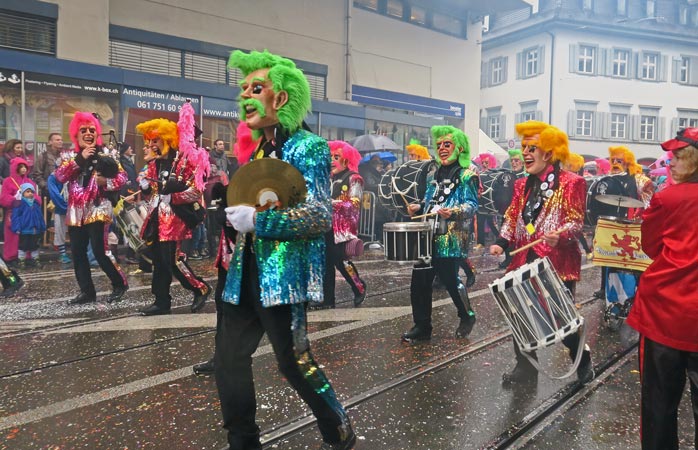 Masked disco kings strut their stuff in the streets of Basel © Carnaval.com Studios / CC BY 2.0

Fasnacht in Basel is Switzerland’s largest popular festival and features 20,000 or so masked participants marching through the city streets to the tune of carnival music. In orderly Swiss fashion, the carnival theme is disclosed months in advance, giving participants good time to prepare for the debauchery.

The carnival itself, however, is not quite as structured, as its patrons wander from one bar to another singing, acting and uttering witty remarks known as Schnitzelbängg.

Find a flight to Basel 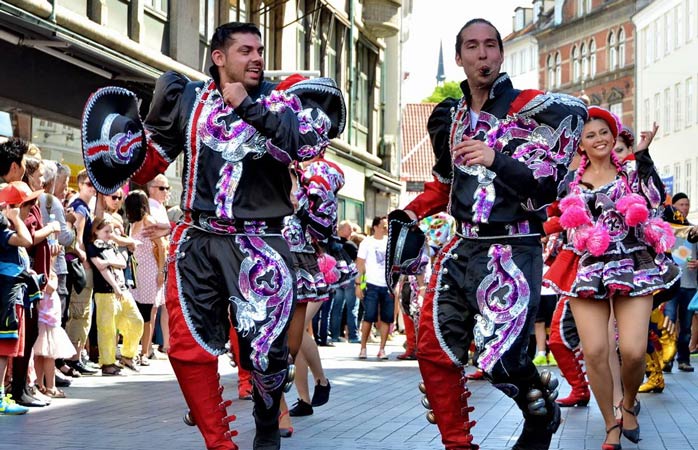 Copenhagen carnival brings a burst of colour and warmth to the city streets every spring © Søren Bie / CC BY-SA 2.0

Copenhagen Carnival is a relative newcomer on the carnival scene, albeit one that has continued to grow rapidly over the years. Dating back to 1982, the event now reels in an excess of 100,000 spectators for three days of parades and associated events centered around world music and samba.

Held during the springtime, the weather tends to be good (touch wood) and the long evenings make for a pleasant backdrop in which to make merry. Make the most of your time in the Danish capital with these free and fun activities. 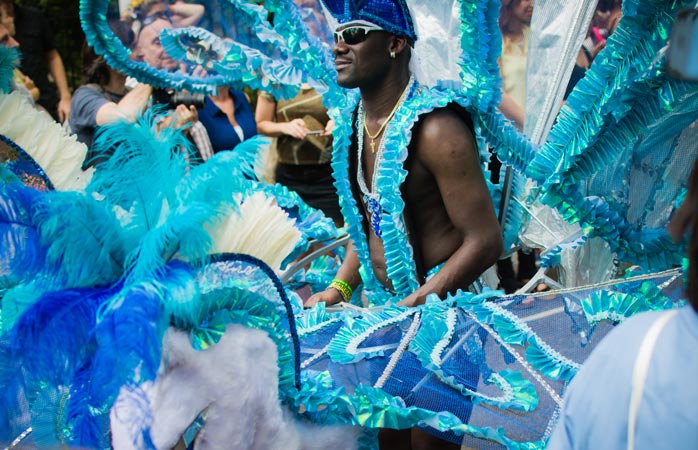 The Notting Hill Carnival is all about ornate costumes. Don yours and join the fun © A Pillow of Winds / CC BY-ND 2.0

London’s biggest street party sprung to life in the late 1960s as an offshoot of the Trinidad Carnival. Twist your torso to warm calypso, soca, reggae and dub rhythms from the many roadside sound systems and snack on mouth-watering cuisine as you immerse yourself in Caribbean culture in the city streets.

With one sizzling fest after another (including several tempting after parties) to choose from, you’ll want to give yourself plenty of time to take it all in. Find peace and quiet when it’s all over with a moment of solitude in one of these calm retreats in London.

DiscoverCities12 of the best carnivals in the world