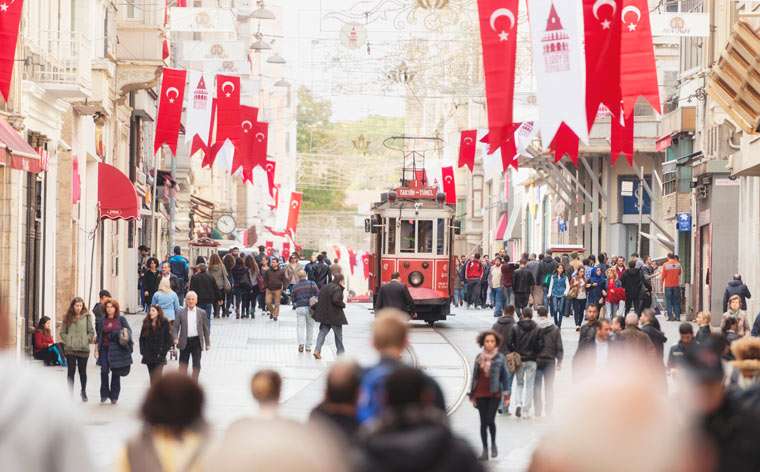 DiscoverCitiesA city on two continents: what to do in Istanbul

From ancient islands, homely local restaurants and colossal religious monuments with a great heritage – here is our guide to what to see and do in the metropolis of Istanbul

Hang out on İstiklal Caddesi (Independence Avenue) in the buzzing area of Taksim, Istanbul's throbbing epicenter

* Sponsored content: This trip to Istanbul was facilitated by Atlas Global

Straddling the Bosphorus, a natural strait that divides Europe and Asia, Istanbul is a tale of two cities. On the European side of this pulsating metropolis lie some of the city’s iconic landmarks, such as the Blue Mosque and Hagia Sophia – prominent features that give this part of Istanbul a fair share of fame internationally. Venture into the Asian part of Istanbul and things are more laid-back – local cafes and a smattering of micro businesses give this part of town a vintage and homely feel, when compared to the more brazen nature of its European counterpart. In our guide to this diverse, gargantuan city we explore both parts of Istanbul – touring through the more iconic sights as well as some of the lesser-known ones.

Find a flight to Istanbul

What to do in the European part of Istanbul

The most iconic sights of the European part of Istanbul are located in close proximity to one another and can easily be seen over the course of a full day if you delve into detail. However, if time isn’t on your side, you can easily breeze through the main sights of the Sultanahmet area in half a day or less.

Brush up on your world history in Sultanahmet 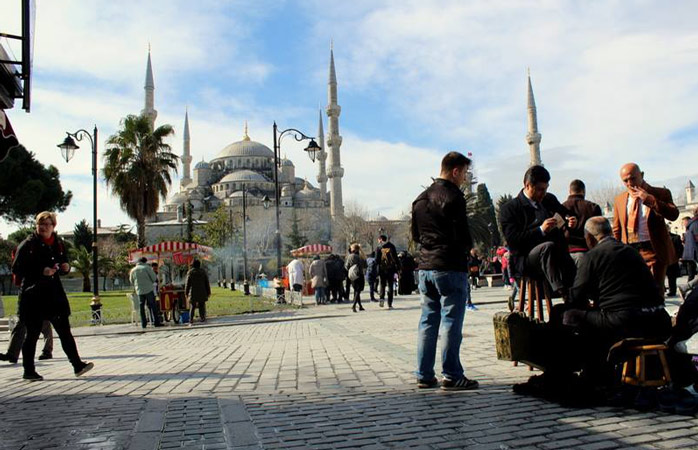 The Sultanahmet neighborhood in the district of Fatih houses the Blue Mosque, Hagia Sofia and the opulent Topkapi Palace, all of which are linked by expansive, verdant gardens. Start at the iconic Blue Mosque (so called due to the handmade blue ceramic tiles in its interior).

200 stained glass windows and over 20,000 tiles and hundreds of square feet of soft red carpet knitted with arcane symbols such as tulips await in the lavishly-decorated interior of the mosque.

Keep an eye open for the ostrich eggs placed on the roof chandeliers – an age-old spider web repellent system that has been keeping arachnids from making the mosque their humble abode (or so they say).  As you digest the vivid impressions of the blue mosque, make your way to the only building that can rival it for miles around – Hagia Sophia, which you will find less than 10 minutes away on foot. 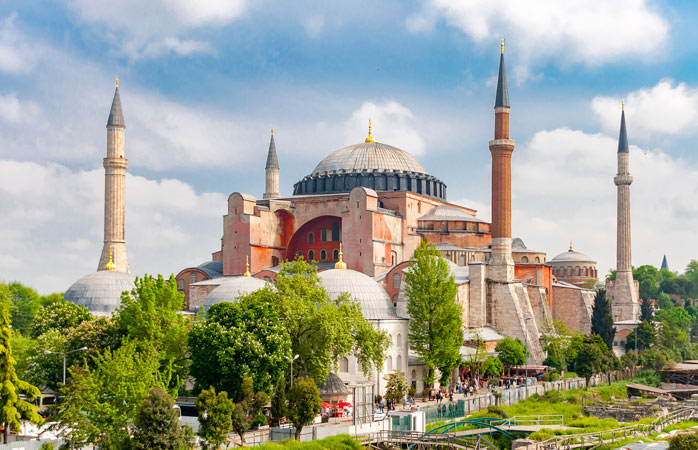 Once a church, then a mosque and now a museum – Hagia Sofia is a unique religious monument

Hagia Sophia began as a church around AD360 at which time it was known as Magna Ecclesia (The Great Church), before being pillaged in 1453 by Ottoman forces that overthrew Constantinople (now Istanbul). The Sultan of the Ottoman Empire, Mehmet II, put a stop to the looting and converted the church into a mosque, a status it retained until 1934.

While inside this rustic, ancient museum, keep a lookout for the clash of religious affiliations that have left their mark on its architecture – from desecrated crosses to pagan installations such as the wish column: a small hole that you can stick your hand into and rotate your palm 360 degrees while making a wish.

Complete your tour of the iconic behemoths of the Sultanahmet area with a trip to the Topkapi Palace, the imperial residence of the Ottoman Sultans for almost 400 years. Much of the complex remains off limits to the public but you can still venture into the Harem – a domestic space reserved for wives, concubines and female servants. If only walls could talk …

Get lost in a bazaar 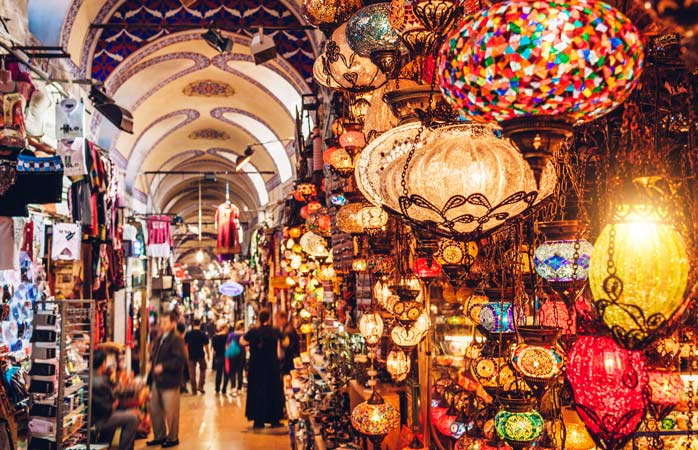 Lose yourself among the trinkets and gadgetry in the Grand Bazaar

Stretch your legs and venture over to the Grand Bazaar, which you will find a mile from the Topkapi Palace, still in the Fatih district. Located inside the walled city, this is one of the oldest covered markets in the world, stretching over 61 covered streets that house an excess of 4000 shops.

Trinkets galore and all manner of spices, lanterns and other goods line the alleyways here. Take a deep breath and bring your bargaining game along for a saunter through these ancient passages.

Getting lost in it all is part of the fun. Take a minute to look up and admire the elaborately decorated ceilings along the streets and alleyways. If you fancy a market that’s less complex, head to the Egyptian Bazaar in the Eminönü quarter, where a plethora of scents (albeit in a more cramped environment) await. Cross the Galata Bridge at the start of the Egyptian Bazaar and strike up a conversation with one of the many local fishermen who cast their lines into the water here.

Hang out around Taksim Square 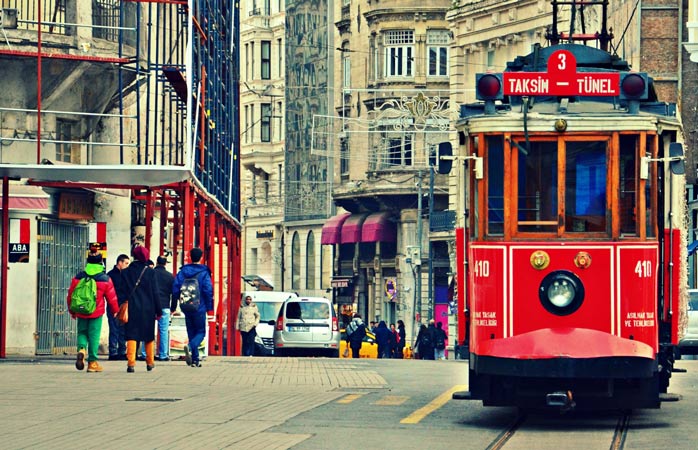 Head across the Galata Bridge and keep on going for a couple of miles until you hit Taksim Square and the surrounding area, in the throbbing heart of Istanbul. You will find restaurants and cafes aplenty here, the world’s second-oldest subway line and İstiklal Caddesi (Independence Avenue), a long pedestrian street that is perennially abuzz with activity.

What to do in the Asian part of Istanbul

The Asian part of Istanbul is less grandiose than its European counterpart and can be seen over the course of a relaxed day. It’s not so much the sites that define it as it is the local ambiance and homely feel, accentuated in no small part by the amicable nature of the people of this part of town.

Turn back the hands of time on the Prince Islands 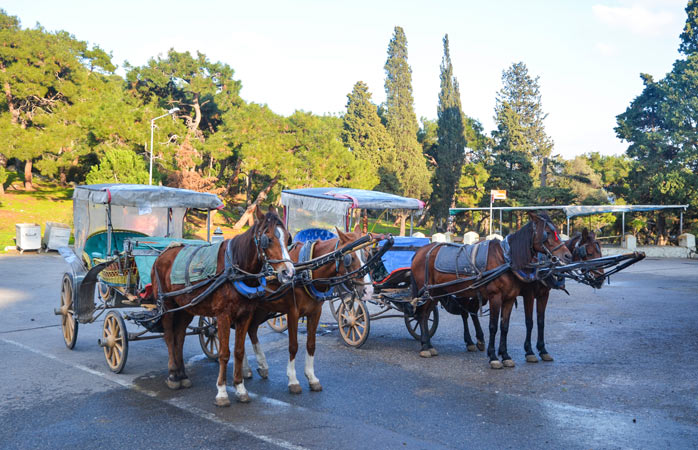 Of the myriad of things to do in Istanbul, a visit to the Prince Islands has to be the pick of the bunch.

The Prince Islands are a scenic archipelago in the Sea of Marmara that have preserved their ancient ways, in contrast to the rest of Istanbul. You won’t find multi-lane highways here, where the horse still reigns supreme as the sole means of transport.

Ferry departures to these peaceful parts leave from Bostancı, Kartal and Maltepe on the Asian side, and from Kabataş on the European part of the city and run all-year round. The summer months are without a doubt the best months to explore the islands.

Roam the streets of Kadıköy 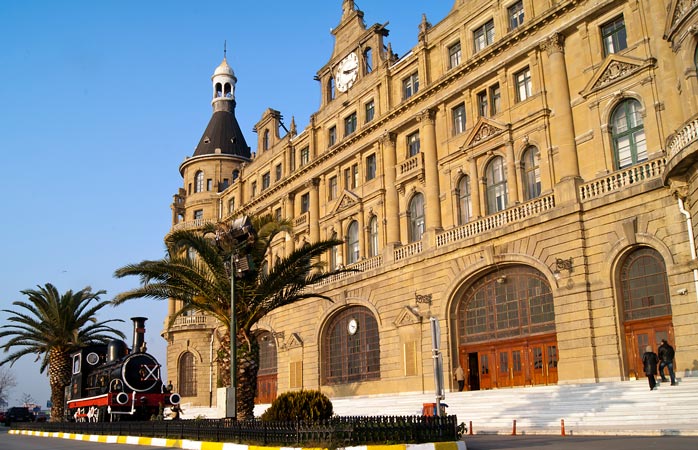 Drop by the iconic Haydarpaşa Terminal, one of the Middle East’s most iconic stations

The area of Kadıköy is the perfect antidote to the more widely visited sights of the European part of Istanbul. Mesmeric sea views along the waterfront and a multitude of restaurants, cafes and small markets give Kadıköy a warm, welcoming feel that is only accentuated by the inviting culture of the Istanbulites that frequent this area.

Grab a seat at one of the many establishments, order a Turkish coffee and let it all sink in. While you’re here – swing by Haydarpaşa Terminal, where services are currently suspended indefinitely, for a peek at a historic icon of the Orient. If you’re on the prowl for some local shopping, join the rest of the locals at the Marmara Balık Market, where succulent fresh fish never fails to draw its fair share of shoppers. 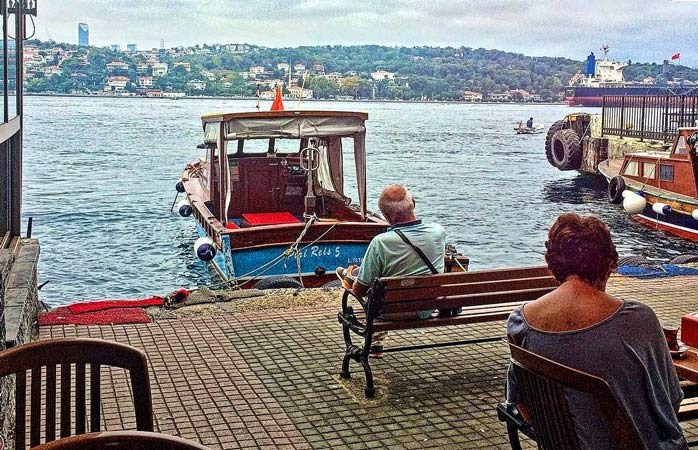 Kanlıca is home to numerous waterside cafes that serve a creamy yogurt topped with a generous sprinkling of castor sugar. Beyond the scrumptious dairy products, enjoy the serenity of this quiet pocket of Asian Istanbul and drop by the Kanlıca cemetery on the hill overlooking the Bosphorus for some great vistas.

Go on a boat trip on the Bosphorus 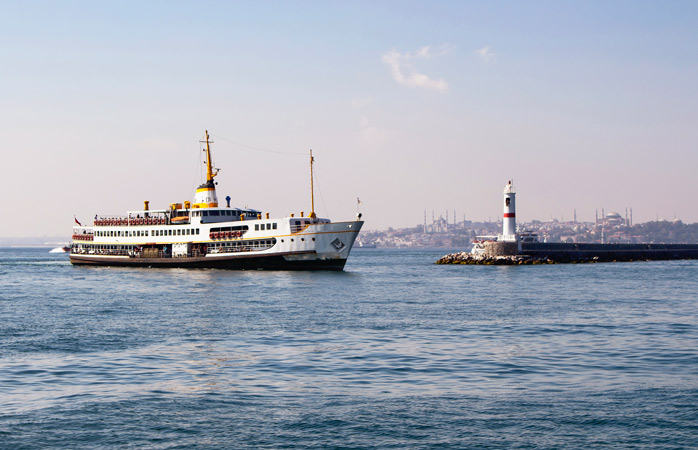 Asia on one side, Europe on the other: cruise the waters of the Bosphorus

Any trip to Turkey’s economic and cultural epicenter, Istanbul, would be incomplete without a boat trip on the Bosphorus. This natural waterway at the apex of continental Europe and Asia connects the Black Sea with the Sea of Marmara and beyond that, the Aegean and Mediterranean Seas.

You will find no shortage of options when it comes to hopping aboard the many vessels that call the strait their home. The Şehir Hatları Ferryboats serve an extensive network of routes around the city, giving you plenty of flexibility for a fare that will set you back a mere 4 TRY (about $1 ). Alternatively, splash the cash on a two-hour private tour. 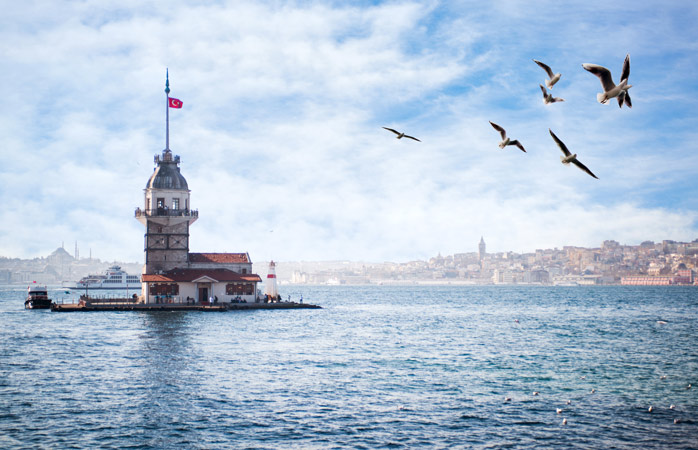 Admire the quaint, oddly-placed Maiden’s Tower as you sail past it in the Bosphorus

Keep a lookout for some of the ritzy architecture on the Asian shore of the Bosphorus and admire Maiden’s Tower (also known as Leander’s Tower) if you happen to sail past the southern entrance of the strait. This remarkable little tower has a history as a lighthouse, quarantine station and most recently, a restaurant.

Where to eat in Istanbul 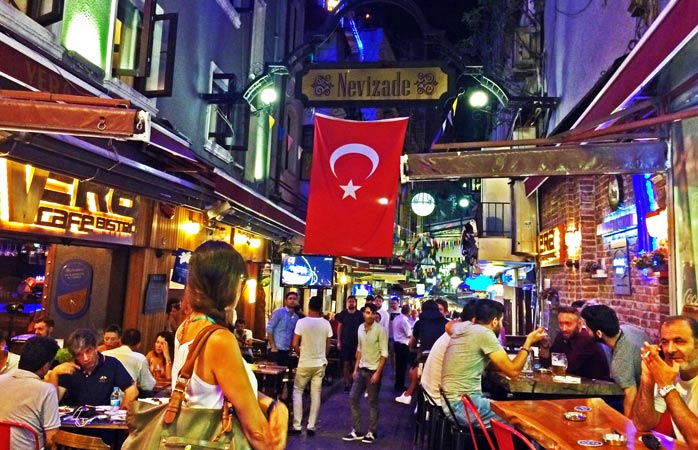 Krependeki İmroz is one of several cozy restaurants on the bustling alley on Nevizade in the Taksim area. Scrumptious meze (traditional Turkish starters) and seafood await. Wash it all down with a shot (or four) or Raki, an anise flavored aperitif, also called lion’s milk or milk of the brave. While you’re in town you will definitely want to sample a kebap or two. Hamdi Restaurant Eminönü is THE place to do so. This traditional eatery serves no less than 17 different varieties of kebap in addition to mouth-watering meze. Sat atop the restaurant’s main room you can enjoy the view of the Galata Bridge and the Golden Horn (Haliç) – the estuary that joins the Bosphorus strait at the Sea of Marmara.

Find a hotel in Istanbul
Find a flight to Istanbul

* Sponsored content: This trip to Istanbul was facilitated by Atlas Global 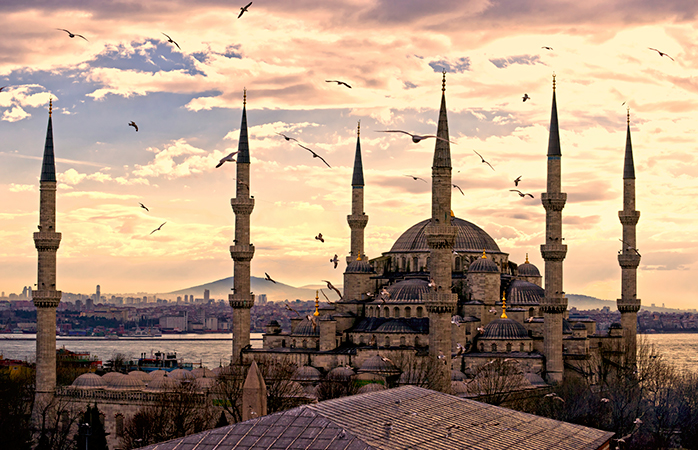 The cheapest city break to Istanbul 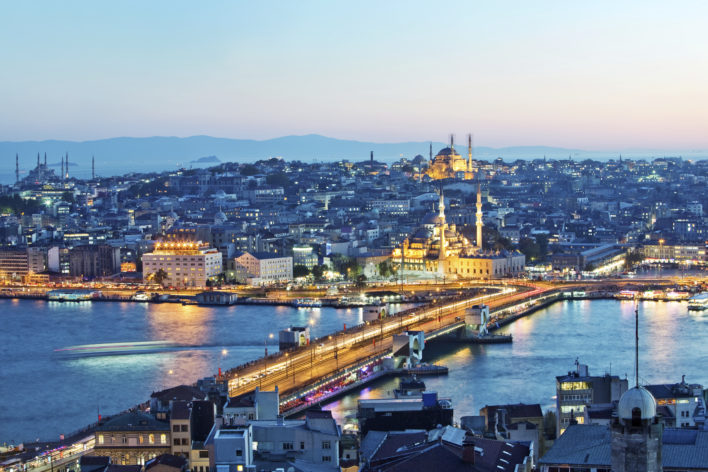 What to do in Istanbul for free! 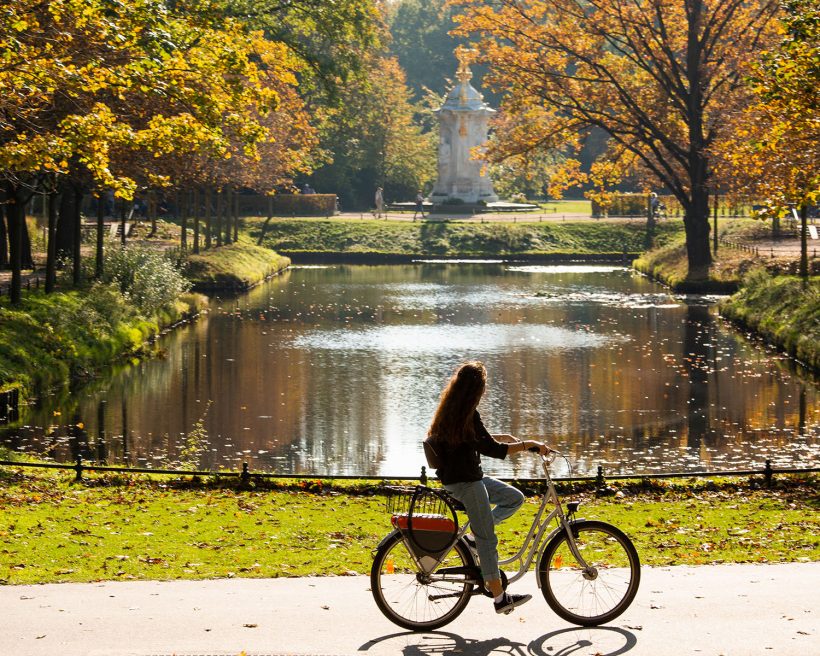 DiscoverCitiesA city on two continents: what to do in Istanbul