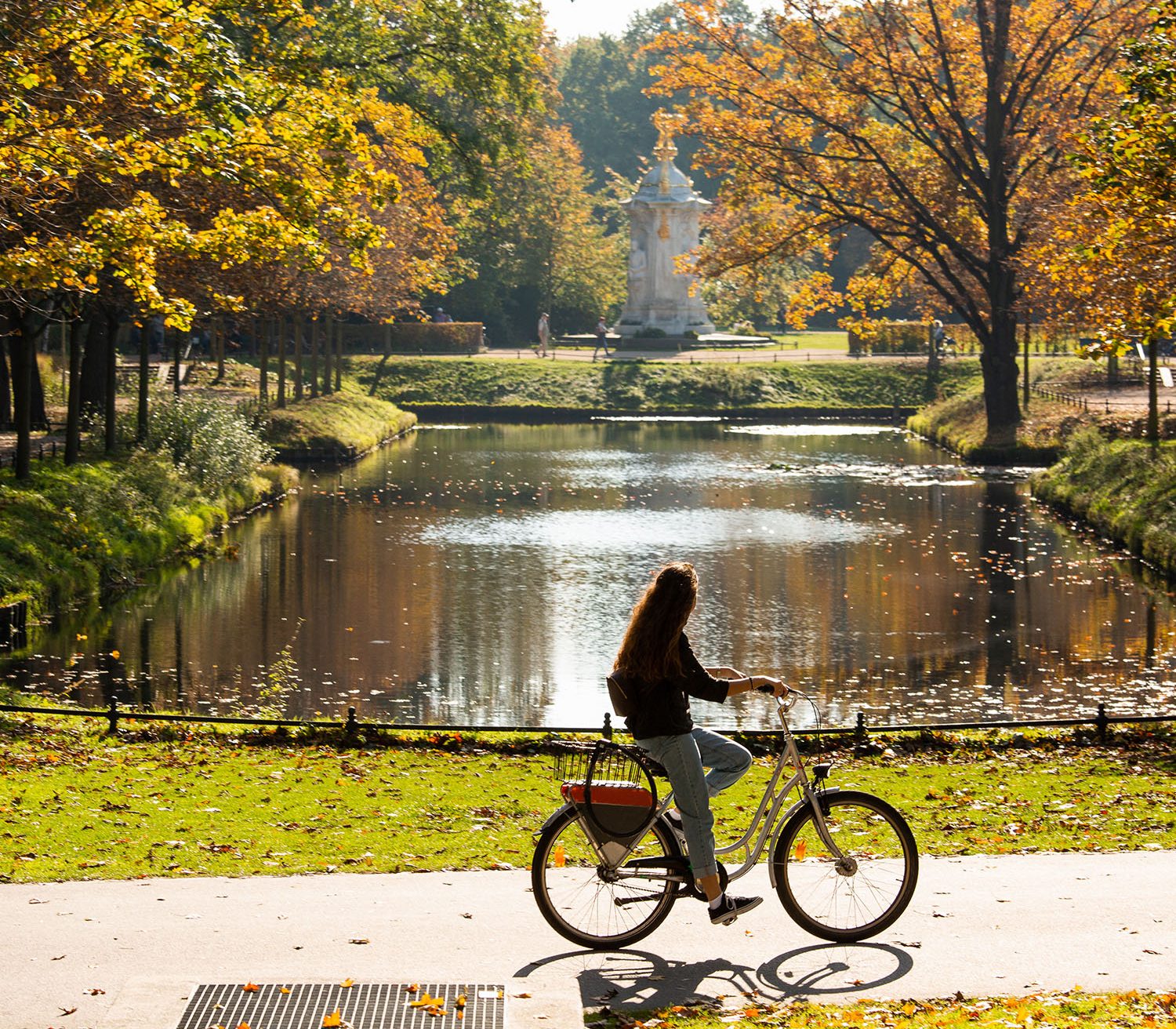 DiscoverCitiesConscious travel: tips for a sustainable trip to Berlin

Sustainability is on everyone’s lips; Berlin is no exception. We guide you to the best spots for an eco-conscious trip to Berlin

Pedal your way through a sustainable trip in Berlin

Berlin is perhaps one of the greenest cities in Europe, where a focus on an ethical, sustainable and environmentally-minded lifestyle is a part of the very fabric of the city.

We guide you to the best spots for a sustainable trip to Berlin, including the best restaurants, sights away from the crowds and recommendations for eco-conscious hotels. 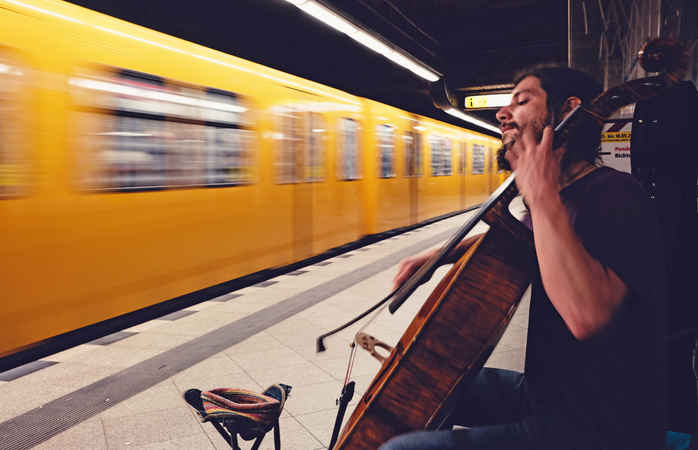 The underground train is one of the many public transport options

Berlin has an extensive, easy to use and relatively affordable public transport system consisting of suburban rail (S-bahn), an underground network (U-bahn), trams (Strassenbahn) and buses that cover the entire city. If you’re staying in a centrally located neighborhood, you’ll likely not have to travel more than 30 minutes to get to the most interesting sights within the city limits.

While it’s slowly becoming possible to buy electronic tickets, most tickets are printed on paper, which may feel a bit old fashioned coming from other, more technologically-minded cities around the world. A day ticket is a good option if you’ll be doing more than 4 journeys in a day, while there are also several other tickets aimed at tourists for multiple days of travel. For individual journeys, you can buy tickets in sets of four from any underground station or suburban rail station.

If you’re more interested in getting around on two wheels, Berlin is a great city to do this, as it’s very flat, has many dedicated bike lanes and drivers are generally quite aware of and used to sharing the roads with cyclists.

There are many options for renting a bike: most hotels and hostels will offer 24-hour bike rental, but there are also several bike sharing companies that are active and have bikes all over the city. All of these require you to download an app, connect a method of payment and have access to roaming data in Germany. Some of the biggest and most popular apps with the largest fleet of bikes to rent for this in Berlin are Lidl Bike, Mobike, Deezer Nextbike, Donkey Republic and Lime Bikes.

In a city the size of Berlin, there are options for accommodation for every budget and desire. But keeping sustainability in mind, here are some options in the most desirable locations around the city.

The Almodóvar Hotel in Friedrichshain is the city’s only fully organic hotel, meaning everything from the delicious food served for breakfast, right down to the cotton sheets on the beds are certified organic. But this does not mean there are any compromises in design: everything is the highest quality and beautifully maintained, making for a comfortable and convenient place to stay.

The Circus Hotel in Mitte is a hip hotel and hostel in the very heart of Berlin that has a focus on sustainability in all aspects of their business. It’s a lively place to stay, but also offers peace and quiet in a convenient location. The onsite bar hosts regular events like karaoke night and live music, making for an easy night out or opportunity to meet other guests.

The Hüttenpalast in trendy Neukölln offers something a bit different than a typical hotel, with individual campervans available to rent, but situated indoors, offering the comforts of a hotel but with a unique twist. The immediate neighborhood is one of Berlin’s most desirable and interesting in terms of boutique shops, cafes and places to see and be seen without feeling pretentious.

Book a hotel in Berlin 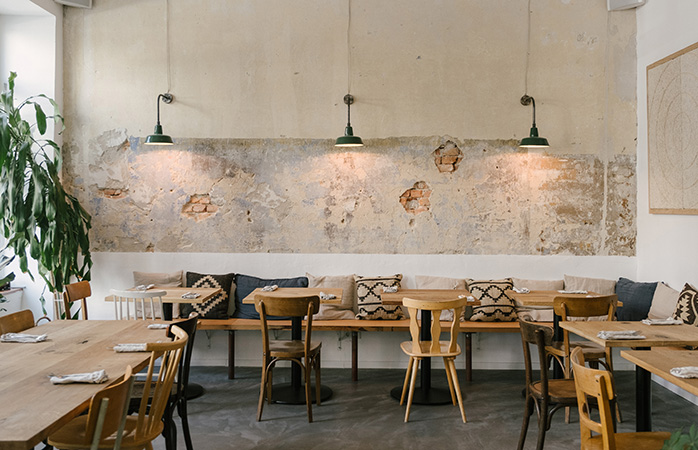 Berlin is a foodie’s dream. With cuisine from all over the world represented, and an ever increasing focus on ethical, sustainable ways of enjoying nature’s bounty, there are tons of places to go for great food that you can also feel good about.

Pêle Mêle is a fully organic and vegan cafe in Neukölln with a rustic feel. Stop by in the afternoon for some of their tasty homemade cakes, with several gluten free options, or make a reservation on a lazy Sunday morning for their fantastic all-you-can-eat brunch buffet.

Frea in Mitte is Berlin’s first high-end plant-based zero waste restaurant. Perfect for a romantic evening or a special meal to celebrate, it’s recommended making a reservation here, as it turns out their simple concept of not wasting food is in fact quite popular.

Li.ke is another all-vegan joint in Friedrichshain serving traditional Thai food, tapas style. Perfect for sharing and avoiding leftovers while giving you the chance to try several different dishes, this place is ideal for something a little bit special without breaking the bank. 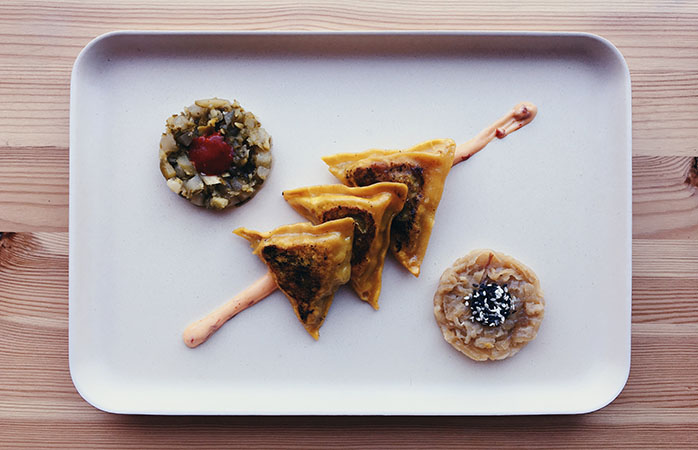 DingsDums in Kreuzberg is a tiny, hole-in-the-wall style eatery that serves mostly vegetarian dumplings (always with several vegan options), using surplus produce that would otherwise be wasted, to serve simple, delicious food and raise awareness about how much food is wasted in Germany at the same time.

While it certainly has its well-known attractions, Berlin is not a city of big, iconic sights. Of course, there’s the Brandenburg Gate, the Reichstag, the Siegessäule and the museums of Museuminsel. But once you’ve seen those, Berlin’s main charm is about wandering around and experiencing what the different neighborhoods have to offer. 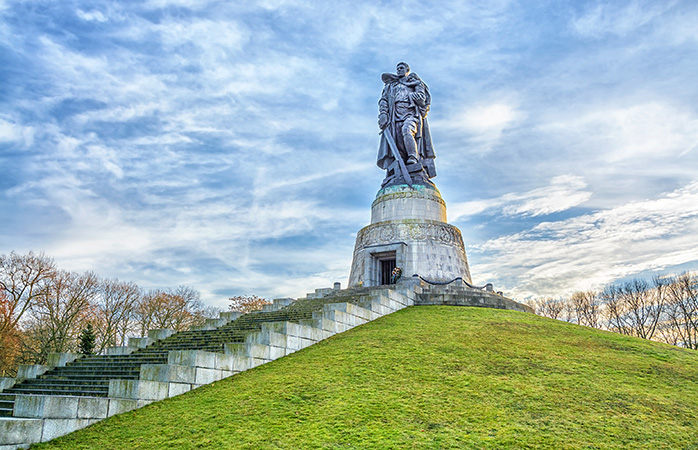 A sight to see: the Soviet War Memorial in Treptower Park

There are some alternative sights in Berlin to the typical tourist hotspots that are worth checking out, though. Here’s a selection, that have the bonus of being in some of the less-visited neighborhoods that most visitors to the city never get to experience, but still have a lot to offer in their own way.

The Soviet War Memorial in Treptower Park is one of the largest memorials of its kind in Europe. The impressive structure is the final resting place to 5000 soldiers of the Red Army who fell during the Battle of Berlin in May 1945. The monument makes for a rather breathtaking and surreal backdrop, and the park itself is worth exploring on a sunny day, even if it’s a little colder, with its many pleasant meadows, hidden gardens, lakes and riverfront promenade.

The Berlin Wall Memorial in Mitte is an excellent alternative to the crowded East Side Gallery, and gives a lot more historical context to the impact the Berlin Wall had on the city. There’s a small free museum opposite the main memorial, with a viewpoint offering a view over the city and down into a reconstructed area between the inner and outer wall showing what the so-called “no man’s land” between East and West looked like. 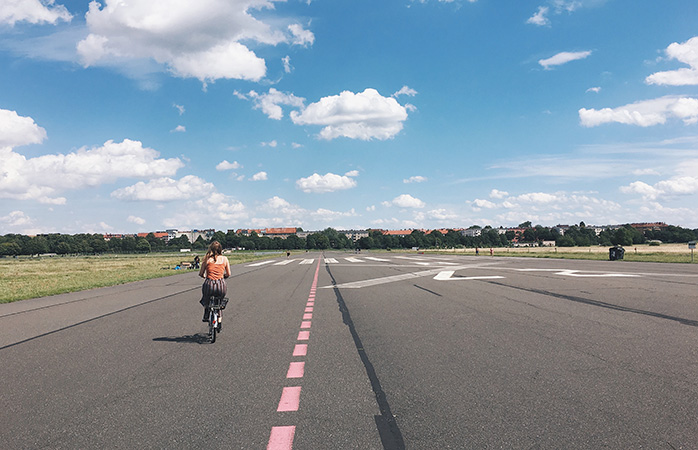 Tempelhofer Feld is one of Berlin’s most unusual outdoor spaces. A former runway for the airport of the same name, it has been open to the public as a park since 2008 when the inner city airport closed. It’s where locals walk their dogs, ride bikes, fly kites (since there are no tall trees), skateboard or even windsurf. In the adjacent Schillerkiez (a small area of Neukölln) there are plenty of cafes to stop and chill out in, as well as places to rent various things to play out on the tarmac with.

Grunewald is one of Berlin’s lungs. This huge forested area in the west of the city is a great place for hiking and exploring nature without having to leave the city limits. From the stations Grunewald and Westkreuz it’s an easy walk or bike ride to the start of the forest, where there are countless trails to follow and explore the beautiful pine forests typical to this part of Northern Europe. In summer, a popular watering hole with Berliners is Teufelssee (literally, Devil’s Lake), a natural lake set inside the forest, where anyone can swim and sunbathe nude, or not, as you wish!

To get a sense of how green the area surrounding Berlin is, it’s also worth taking a trip a little further outside of the city. Beelitz-Heilstätten is an easy place do so, as it’s on a direct train line from central Berlin, and can be reached by regional train in less than an hour. 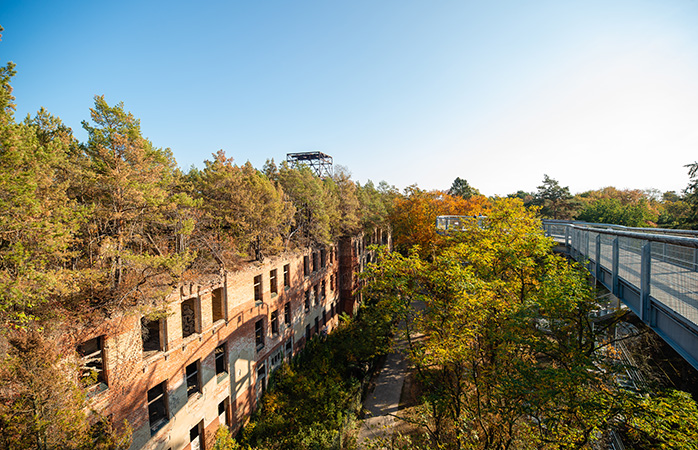 Baumkronenpfad: a walk among the treetops

Here you can visit the Baumkronenpfad (treetop walkway), an impressive structure of wood and metal built above the treetops of the forest that is fully accessible for stunning views over the green that surrounds Berlin. The small town is also home to the former sanatorium built for wealthy members of society from the capital recovering from tuberculosis in the early 1900s. The series of buildings that made up the sanatorium have long been abandoned, and exploring the dilapidated remains of these once opulent structures is both fascinating and rather creepy.

Overall, Berlin is a city to take your time exploring and experiencing. It’s not necessary to hit all the top “must sees” of the city to get a sense of what it’s all about, and you can easily spend a couple of days focusing on just one of the many aspects of the city from food to history to art and more.

Take it easy and do it with care! 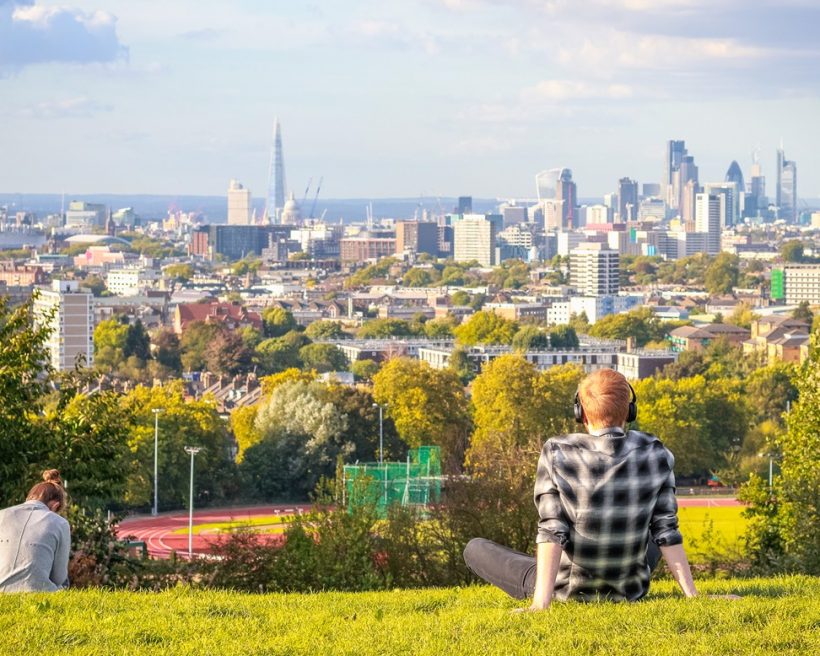 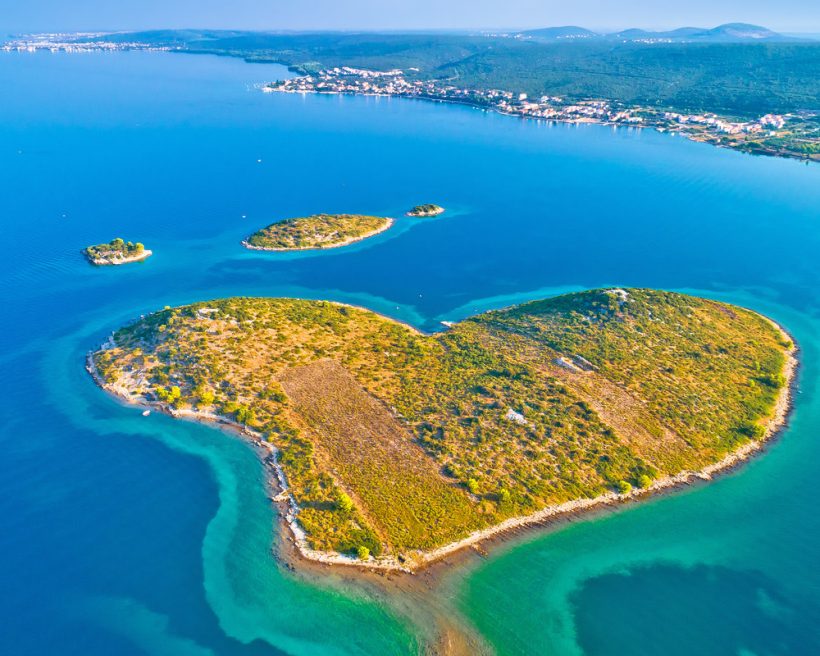 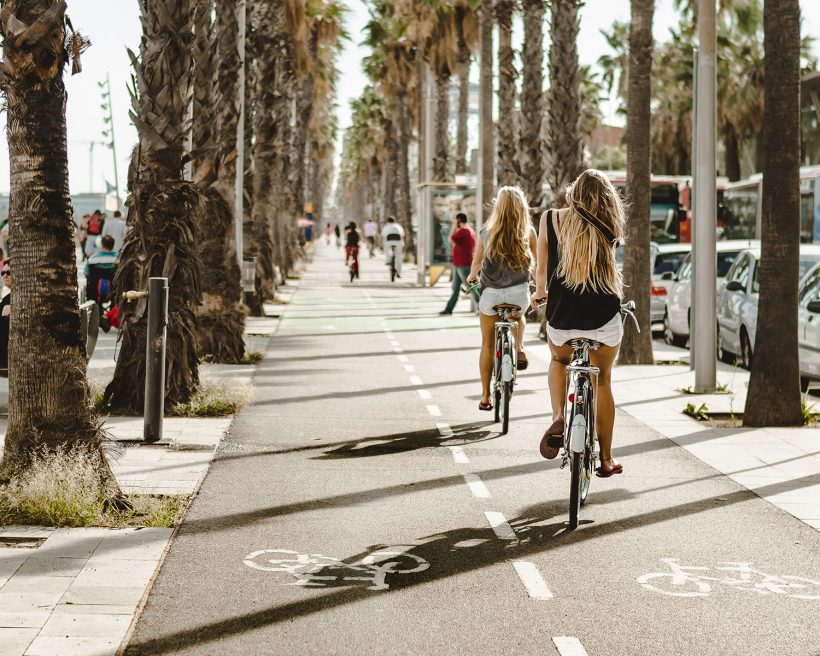