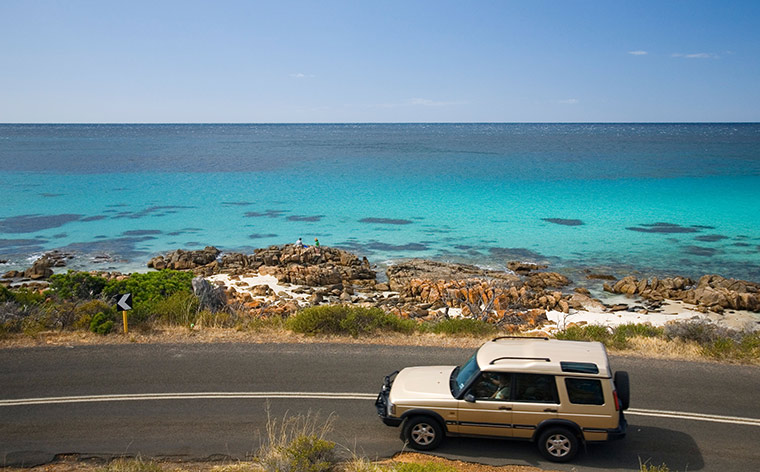 Don an Akubra hat, pick up an outback-worthy ride, load up on the sausage rolls and Vegemite sandwiches, and crank up AC/DC’s Highway to Hell – because it’s time to take on the sunburned landscapes of Western Australia. This seriously epic road trip covers everything from possible whale sightings, limestone caves and haunted prisons to a micro-nation, where you can get your passport stamped. If we’ve learned anything from Mad Max, it’s that everything in Oz is out to kill you – especially the sun. Scorchingly hot weather is the norm in WA, and that hole in the ozone layer is no joke. Pack plenty of water, don’t skimp on the sunscreen, and keep an eye on your radiator. Western Australia (WA) is a state that literally covers the whole west of Australia, so be prepared for some massive distances – about 1860 miles in total. There’s no shame in power napping along the way.

Fly into Perth to get started 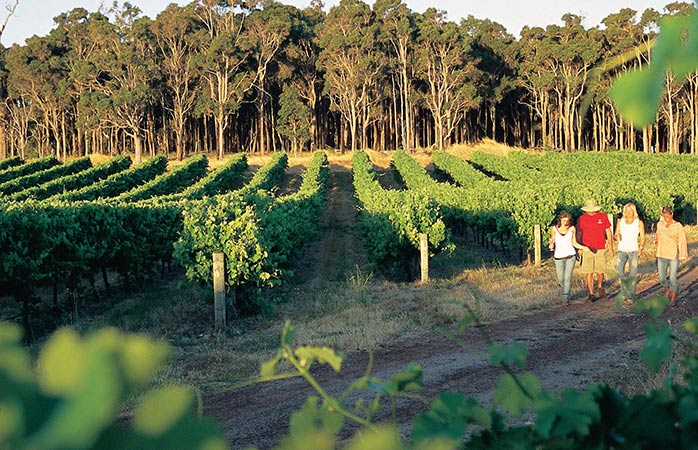 The journey begins in the Margaret River Wine Region, a leafy place of twisty roads lined with Sauvignon Blanc and Cabernet Sauvignon plantations. There are dozens of must-visit boutique wineries offering cellar door visits and taste testing, and even a distillery if you’re after the hard stuff. The stunning Cape Dutch architecture of Voyager Estate is a must-see – take some tea and scones overlooking the formal gardens – and Vasse Felix also serves up some top drops. If you’ve had your fill of vino, swing by the Margaret River Fudge Factory and The Market River Chocolate Company and get your sweet tooth on. After that, go spelunking through the limestone caves beneath the Leeuwin Naturaliste Ridge – Jewel and Mammoth Cave are particularly stunning.

Now it’s north up the coast to the beach towns of Dunsborough, Busselton and Bunbury. Way out on an outcrop, Dunsborough is home to the Cape Naturaliste Lighthouse, a white-washed, red-doored beauty that can be climbed for spectacular views. Pop over to Castle Bay, with its namesake Castle Rock, and take some time to stroll the picturesque Meelup Reserve Trail. The flies descend in summer, but they’re part of that Aussie charm. Head back to the car and off to beachy Busselton, where the 2 km jetty takes you to an Underwater Observatory – and whale sightings are common. Then head to Bunbury, where bottlenose dolphins frolic and play, both in the water and at the Dolphin Discovery Centre.

Next it’s off to Fremantle, just a few clicks from Perth. If the hot weather’s getting to you, stop off at Oggies Ice Cream Cafe for some 60 flavors of home-made gelati. At the mouth of the Swann River, Fremantle is a port city brimming with quaint colonial architecture and sprawling markets. Looming structures like the storied, apparently haunted Fremantle Prison and the Round House are a window into Down Under’s recent penal past. Book in an eerie night-time tour to learn some history and spot some ghosts. Tour the Shipwreck Galleries to check out the hull of the Batavia, then stop in at the sail-shaped Maritime museum – if you squint it looks like a mini Sydney Opera House. And since you’ve been blaring AC/DC the whole way, don’t forget to snap a photo of the Bon Scott statue in Fishing Boat Harbour.

A Benedictine community isn’t something you’d expect to see in a country where 70,000 people declared their religion to be “Jedi” in the national census. New Norcia’s the only one in the whole country, and it dates all the way back to 1847 – that’s ancient in colonial Australia terms. Head up the arid Highway 95 to find it. There’s a monastery on site you can tour, along with a roadhouse and a museum full of gold-smothered artifacts. Swing by the store to pick up some award-winning olive oil, then stop off at the on-site hotel for a pint of New Norcia Abbey Ale – a traditional monastic ale. 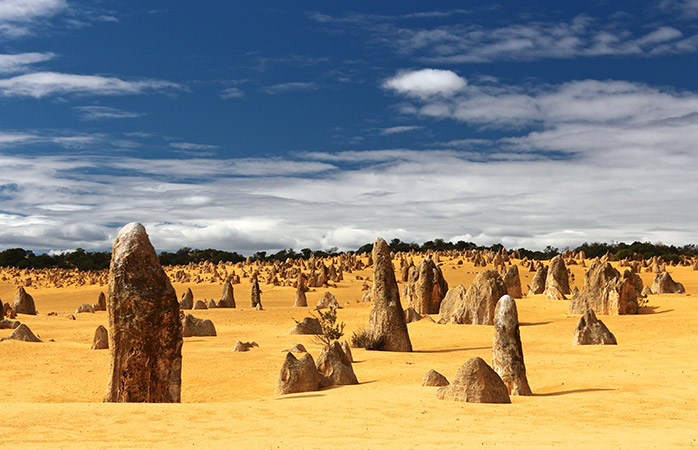 Swing by Nambung National Park and admire the Pinnacles formation

It’s back to the coast with a trip to Cervantes, a chilled fishing town home to white sand beaches perfect for a lunch of fish and chips – grab a potato cake or two as well. Cast a line at Hangover Bay or Kangaroo Point, or crack open a lobster at the Indian Ocean Rock Lobster Factory. If you’ve got 4WD capability, cruise the sand dunes between Lancelin and Cervantes – if not, try your hand at sand boarding instead. If daylight’s still on your side after all that, take a quick detour to the iconic Pinnacles formation, just down the road in Nambung National Park. History buffs will want to swing by Lake Thetis, which is brimming with ancient thrombolites.

Cruise the edge of the gorgeously blue Indian Ocean for a few hours before stopping off at Geraldton, a trendy beachside town renowned for its windsurfing and kiteboarding – Point Moore and Coronation Beach are your best bets here. If diving is your thing, check out the South Tomi wreck, or visit the Abrolhos Islands for outdoorsy adventures and stunning dark natural pearls. From there, it’s off to Principality of Hutt River, a micro-nation founded in 1970 by a wheat farmer aggrieved over government-imposed wheat quotas. Bring your passport, which will be personally stamped upon entry and exit by a member of the micro-nation’s Royal Family. Camping’s available on-site.

Fill up your gas tank and grab a few bottles of water, because there’s a long leg ahead. Head up Highway 1 – the one that rings the entirety of the country. Stop off for breathtaking sightseeing at Shark Bay and Monkey Mia Reserve, then take a break at Carnavon, where you can stroll the One Mile Jetty and check out the Space and Technology Museum with its nearby massive satellite dish. A few hours up the road, Coral Bay’s a tropical paradise that’s home to World Heritage-listed Ningaloo Reef. Bring your flippers and a snorkel and go turtle-spotting. Further north, at the tip of the North West Cape, Exmouth offers more reefs, tropical fish and whale sharks. If you’re longing for dry land, head to Cape Range National Park for kangaroos galore and red, Mars-like rock formations.

If those distances are starting to get to you, toughen up: you’re not even halfway up the coast of WA yet. But don’t worry – we’re only going as far as Broome, just a mere 807 miles away. Fortunately there’s plenty to keep you occupied along the way. Visit Port Hedland, with its Courthouse Gallery of local and Indigenous art, and the Silver Star cafe, a spot of 1930s Americana housed in a railcar. Then take a break at Eighty Mile Beach, a wetland wonderland bursting with migrating birdlife and nesting turtles. Finally, stop off at the stunning Karijini National Park, where you can hike gorges, explore rock pools and marvel at the 40,000-year strong Indigenous culture.

You’ve made it! Broome is the gateway to WA’s Kimberley region

You’ve made it – Broome’s the gateway to WA’s Kimberley region, and it’s a superb base for your explorations. Down a hard-earned beer at Matso’s Broome Brewery, which overlooks Roebuck Bay, and pick up a few souvenirs at the Courthouse Markets and Chinatown. Book a fast boat tour over the Horizontal Falls, then take in the stunning “Staircase to the Moon” illusion with a coastal sunset. Finally, keep your eyes peeled for the 130 million-year-old dinosaur footprints that are visible at low tide at Gantheaume Point.

And since you’ve come so far, why not set your sights on Darwin? It’s only another 1,118 miles up the road…

Before you go, check our expansive guide to car rental comparison. And while you’re in that neck of the woods, why not visit these 7 spectacular New Zealand destinations away from the crowds? 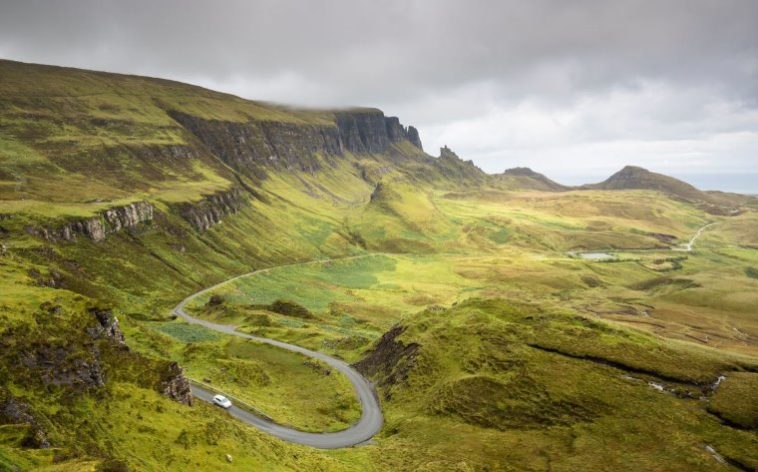