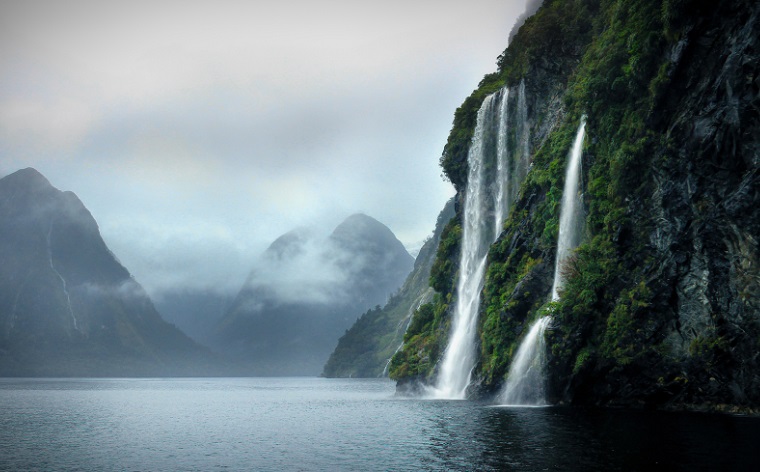 DiscoverNatureDiscover New Zealand: 7 spectacular destinations away from the crowds

It’s no secret that New Zealand is home to some of the world’s most stunning landscapes and diverse flora and fauna – Mother Nature sure outdid herself when she crafted this remote paradise in the South Pacific Ocean. The country is made up of two main islands, named intuitively North Island and South Island, and many small islands.

The country is well-visited – roughly 3.3 million travelers arrive here every year – with places such as Queenstown, Milford Sound and Marlborough attracting many of them.

We guide you to the less-traveled spots, from reclusive beaches and hiking treks to bird havens: discover New Zealand off the beaten path. 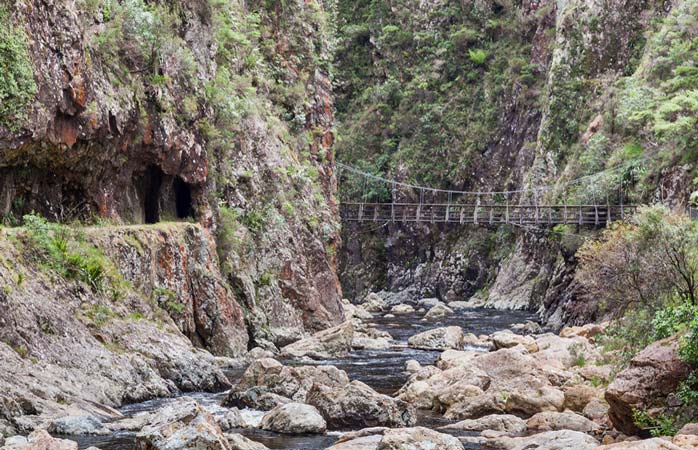 Explore the tunnels and hidden walkways at Karangahake Gorge © russellstreet

The Coromandel Peninsula is a popular getaway spot for many locals escaping the busy city life of the North Island. While places such as Cathedral Cove and Hot Water Beach are on everyone’s travel lists, try exploring something a little bit different.

The Karangahake Gorge features on many must-see lists and though many people drive through it, few actually take the time to explore the walkways, hidden tunnels and spectacular river stretches. Located at the southern end of the peninsula, the gorge was at the heart of the 1875 gold rush. The towns around the gorge were important mining centers.

The four-mile Historic Walkway takes you on a journey over sharp rocks, boulders, bridges and through a tunnel, to a walkway where gold mining relics have become part of the landscape. 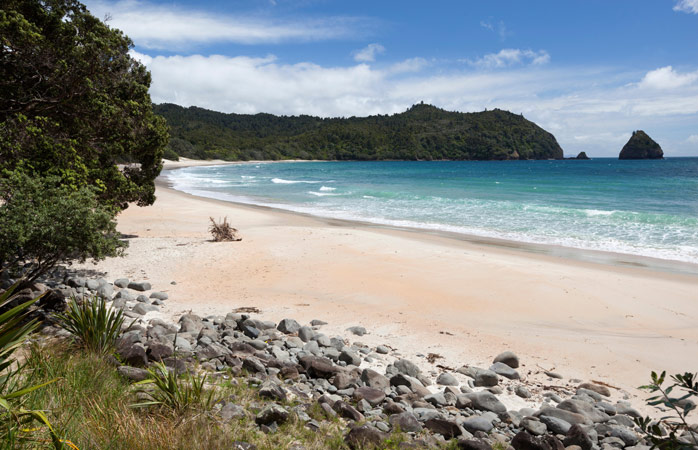 New Chums Beach – a place just for yourself

If there’s something New Zealand has plenty of, it’s beaches. Whether you’re all about soaking up the sun with your toes deep in sand, or you immediately picture yourself on a surfboard, finding a great beach here is easy. However, finding a pristine one (almost) all to yourself might prove a little bit challenging.

New Chums Beach is easily the kind of place any serious beach-lover dreams about. For starters, it’s among the last undeveloped beaches in the country, partly thanks to its rather isolated location on the north east coast of the Coromandel Peninsula.

In order to get here, you’ll have to take a 40-minute walk through the bush, wade through an estuary and hike along the shoreline that will lead you to a headland. Cross it, and you’ve reached New Chums Beach. Large pohutukawa trees and native bush line the white sand beach and the water is the clearest emerald blue shade. 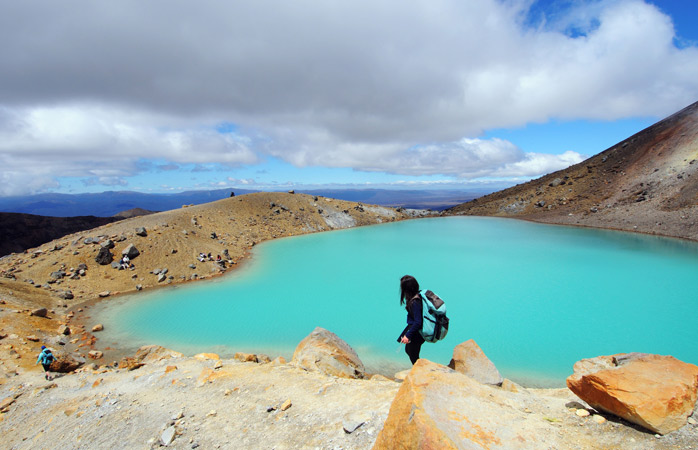 New Zealand’s oldest park and both a natural and cultural UNESCO World Heritage Site, the Tongariro National Park spans dramatic and eerie landscapes, punctured by volcanic peaks and craters. Once here, an instant feeling of deja-vu will arise, and understandably so since it’s one of the most recognisable Lord of the Rings locations – Mordor, the home of evil Lord Sauron.

The Tongariro Alpine Crossing is a one-day trek that takes you on a journey spanning craters covered in old lava, blue and green lakes, hot springs and surreal rock formations. As you trek, vegetation shifts from alpine tussock to barren land, and upon reaching the raw volcanic terrain, you’ll be surrounded by steam rising from fumaroles – openings in the planet’s crust.

Though it’s one of New Zealand’s most beloved treks, it still requires a fair deal of preparation. Make sure you’re prepared for sudden weather changes, have the right footwear and plenty of water. 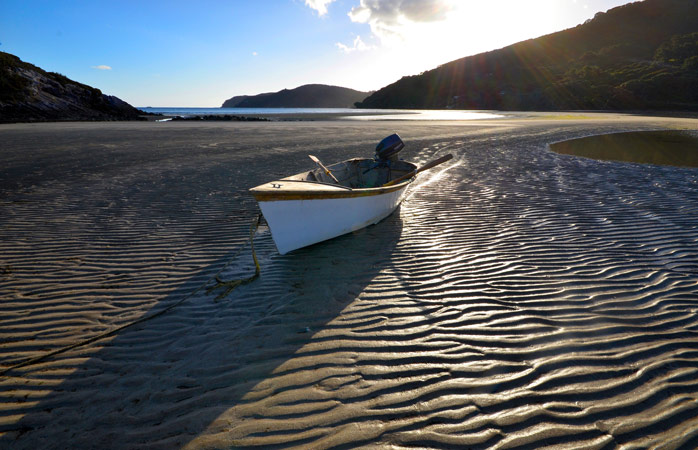 Most are hesitant to go beyond Auckland’s Waiheke Island – and while Waiheke Island is picturesque, the population does swell to four times its normal size come holiday time. Yet it’s possible to hop on a boat from New Zealand’s biggest city and find yourself lost on an island – all within two hours. All you have to do is go a little further afield in Auckland’s Hauraki Gulf.

Though the largest island in the Gulf, Great Barrier Island is, with just 939 residents, very sparsely populated. Bring your fishing rod and hiking boots because you’re going deep into untouched wilderness. The island itself is full of white sandy beaches, windswept sand dunes and tiny, secluded bays home to some of the best diving and boating in New Zealand.

The island is one of the last great wilderness areas of the Auckland area. The east coast boasts excellent deserted surfing beaches, often backed by wetlands and many surviving archaeological sites. If you’re lucky, you may even spot orcas. 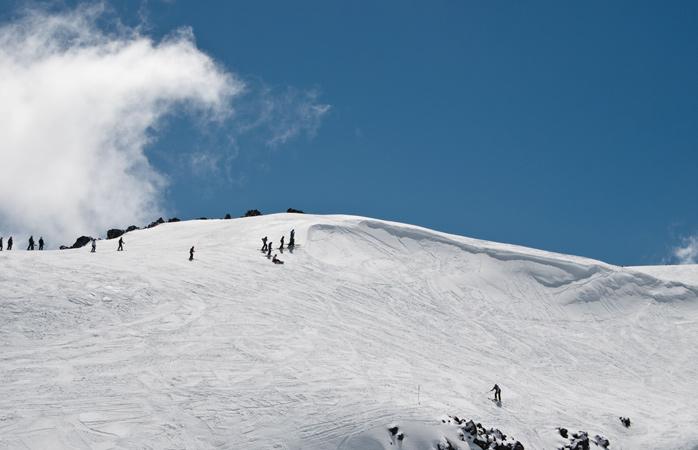 Hands up if you thought Queenstown and Wanaka had New Zealand’s best snow conditions? Don’t worry, you’re not alone. New Zealand’s South Island collects all the accolades for skiing, but it’s actually its lesser-known North Island rival which gets twice as much snow and has a longer ski season.

Queenstown may have a choice of four mountains, but the 2797-metre-high Mount Ruapehu has superior skiing opportunities. It’s also less expensive for accommodation, ski passes and has some of the most picturesque alpine scenery in the country. You can ski at either Turoa or Whakapapa, located on opposite sides of Mount Ruapehu. Turoa has the highest lift in New Zealand (7618 feet) and the longest vertical drop in Australasia (2368 feet), while Whakapapa is New Zealand’s largest developed ski area.

Find a flight to Auckland 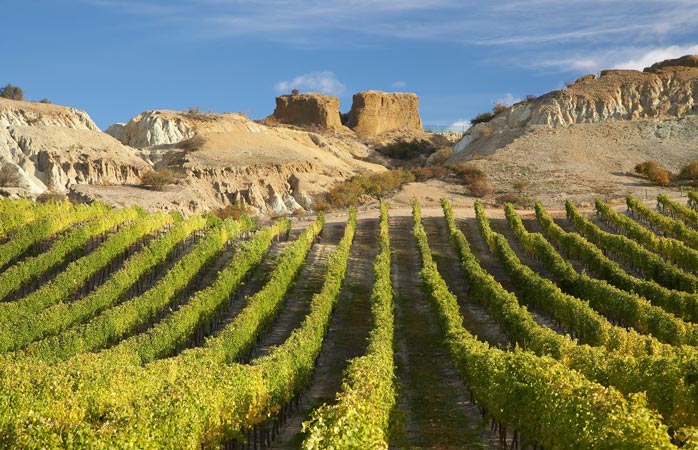 Sure, New Zealand’s Sauvignon Blancs are world-renowned. The region that produces most of them – Marlborough – is New Zealand’s most lauded and most visited wine region. But what about combining wine tasting with bungy jumping and extreme sports?

At New Zealand’s seventh biggest wine region, Central Otago, you’ll be far from the crowds and discover some of the world’s best Pinot Noirs growing among spectacular alpine scenery. It’s here you’ll find New Zealand’s most southerly vineyards. UK wine writer Jane MacQuitty of The Times, calls Central Otago a serious rival to Burgundy for Pinot Noirs. “I have discovered a little-known and mostly young region that I think will knock the rest of the Pinot gang for six,” she says. Come and discover the secret.

Additionally, it has to be the only wine region on Earth which offers wine tasting and extreme adventures combinations – think bungy jumping, sky diving and jetboats. 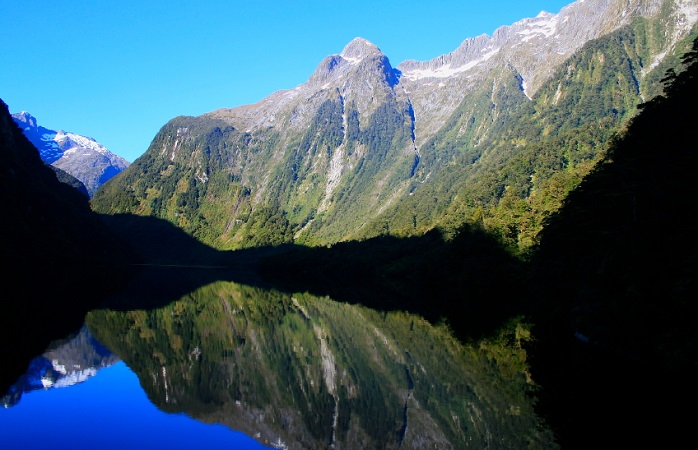 Milford Sound may well be one of the most pristine fjords in the world and one of New Zealand’s most famous tourist attractions, but what about visiting a fjord that’s three times longer, 10 times larger in size, far more untouched and hosts 200 times less visitors a year? While Milford Sound only just makes the top 10 of New Zealand’s largest fjords, the isolated Doubtful Sound comes in at number two.

Getting there does require more effort than the more famous Milford Sound, but it’s worth it. Departing from Manapouri, there are different ways to get there: by kayak, helicopter, day or overnight cruise. It’s only the more adventurous travellers who make it here, but once they’re here, they have it to themselves. Not to mention spotting New Zealand’s national treasure, the flightless kiwi bird, and plenty of bottlenose dolphins, fur seals and Fiordland crested penguins. 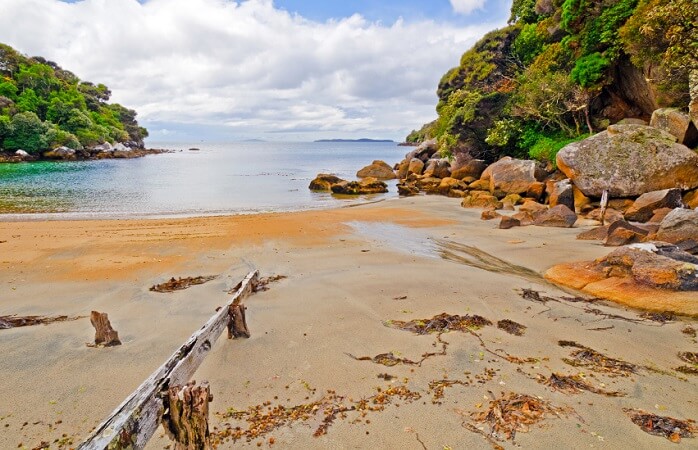 Want to go to an island that only 35,000 people visited last year? While New Zealand’s Bay Of Islands, in the North Island’s far north, attracts over a million visitors each year, Stewart Island, on the southern tip of New Zealand, remains virtually undiscovered. And while both are marine parks with large numbers of bottlenose dolphins, penguins and whales, Stewart Island is also the bird capital of New Zealand. Here you’ll get the chance to see five types of penguins, nine types of albatrosses, 19 kinds of petrels, five types of shags, five types of geese, swans and ducks, three types of plovers, six types of gulls, four kinds of parrots, two types of cuckoos, four kinds of flycatchers, five warblers, four types of finches, kaka, tui, bellbirds, hawks and falcons – and that’s just for starters. The island boasts 434 miles of coastline but only 12 miles of road, and is also famous for its night skies – the Aurora Australis or the Southern Lights.

Find a flight to Christchurch

Looking for more inspiration? Check out 12 scenic hiking trips for intrepid trailblazers or plan a road trip through beautiful Iceland. For more travel destinations and expert tips and tricks, go to momondo Inspiration 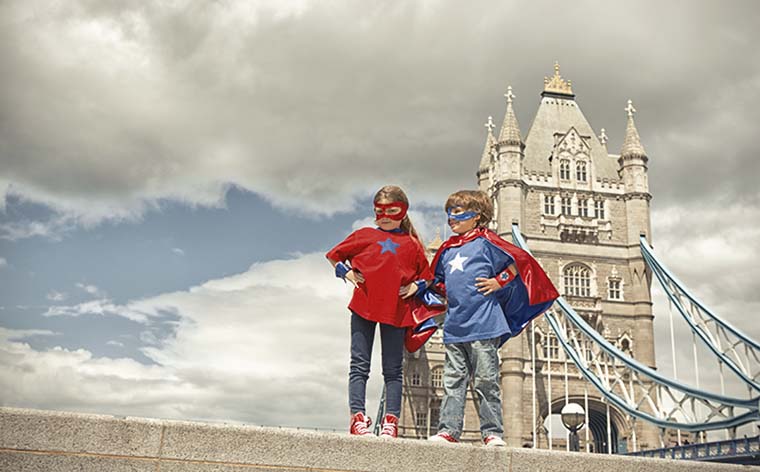 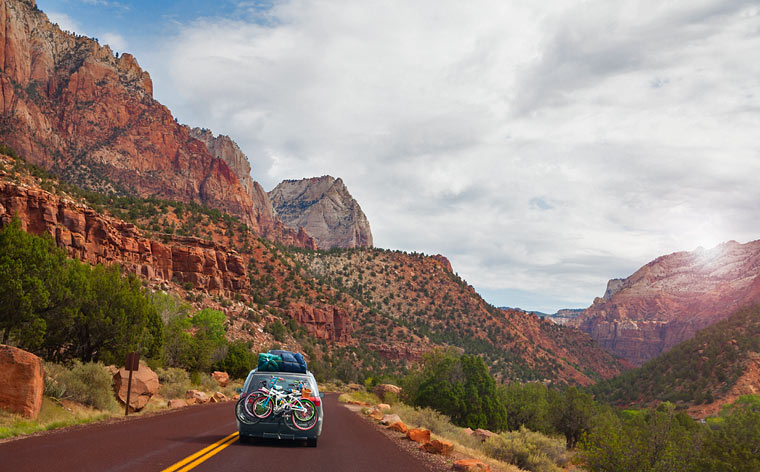 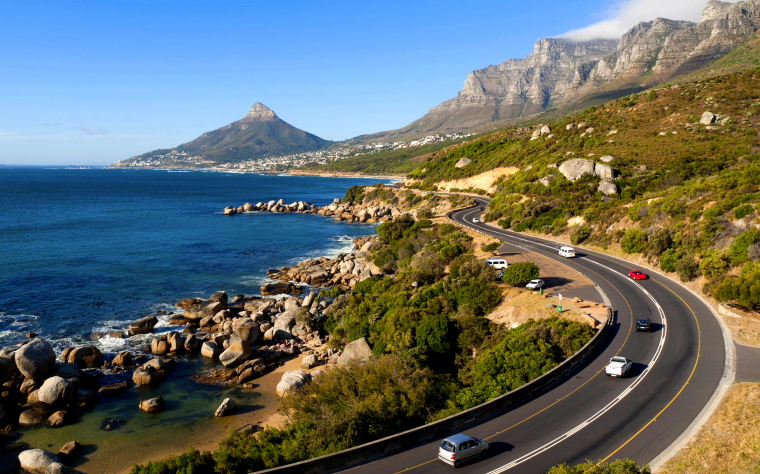 On the road: discover South Africa behind the wheel