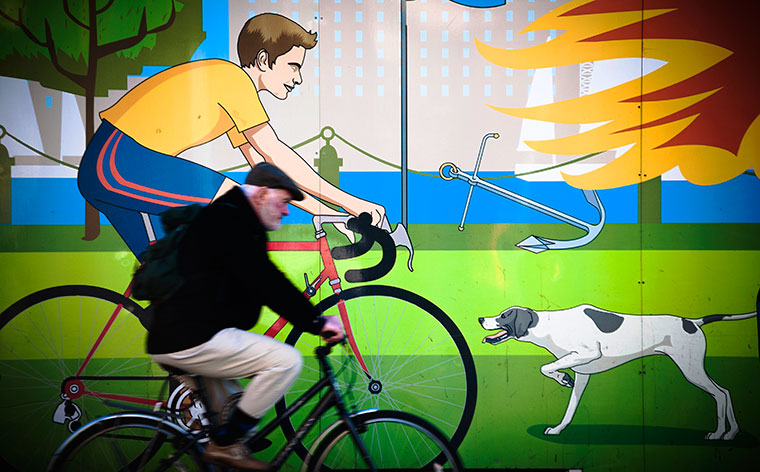 DiscoverCitiesThe most bike friendly cities for the cycling traveler – part one

Trade in traditional transportation for a sleek two-wheel ride. Cycle at your own speed to see the sights and burn some rubber with the locals in these bike friendly cities

Explore the city while rolling in style

Leading the path is Copenhagenize, an urban design and communications consultancy set out to encourage cycle infrastructure in our cities. To steer the cause, they’ve set up the Copenhagenize Index, ranking the top 20 most bike friendly cities, based on the insights of urban planners, anthropologists and cycling buffs.

Following in the stride of the index, we’ve listed the top 20 cities they love, we love, and you’ll soon love cycling through, too! In part one, we outline the top 20-11. Read part two for the top 10 bike friendly cities. 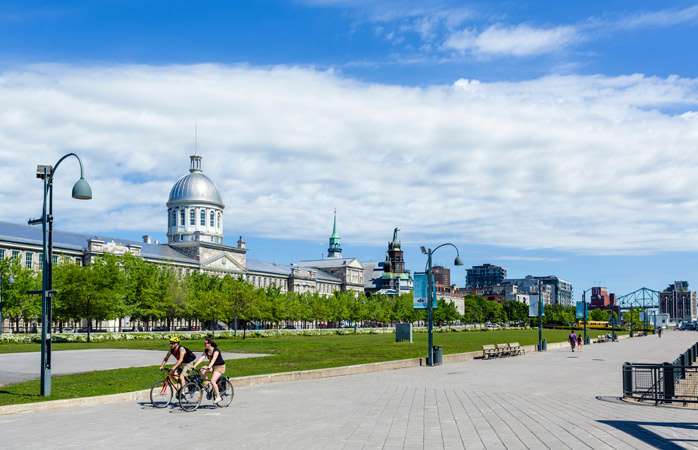 Last on this top twenty list but definitely not the least of the world’s most bike friendly cities, Montréal has a lot to offer the visiting cyclist. In Montreal it isn’t a rare sight to see lycra-clad cyclists hanging out at the Parc Jeanne-Mance; cycle culture is alive and well here despite the long winters and hilly landscape. The Tour de l’île de Montréal, an annual citywide ride, is held every year in June, closing off 31 miles of streets to car circulation, encouraging new and expert cyclists to experience Montréal on wheels.

On a typical day, you can enjoy a stride through Montréal’s artsy neighborhood Mile End thanks to its bike lane. Pop in to the Cagibi Café for a cup of coffee and keep a hand free for a bagel at St-Viateur (because donuts are such a Canadian cliché).

Find a flight to Montréal 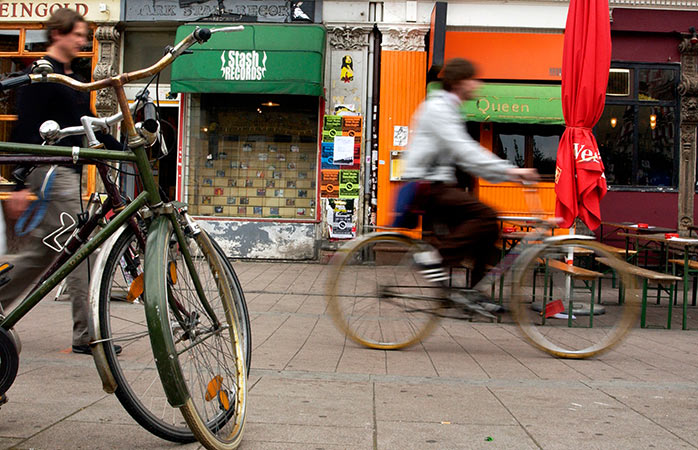 Records aren’t the only things spinning in Hamburg

Ditch the car, the city of Hamburg is best seen by bike. The neighborhood of HafenCity is a great place to start to measure the innovations sprouting in Hamburg. Bask in the sun while looking out over the old port warehouses turned residential. Cycle across bridges, over canals, past the screeches of roller coaster riders at Hamburger Dom, through to the hip scene happening in the Schanzenviertel quarter. Stock up on cool buys in stylish shops or, if you’re strolling through on a Saturday, rummage through the stalls at Flohschanze flea market.

When you’re done rolling and looking for some rocking, swing on down to INDRA where the Beatles played. Today, you can enjoy everything from Soul, Funk, Blues, or whatever gets those Hamburg feet moving.

Find a flight to Hamburg 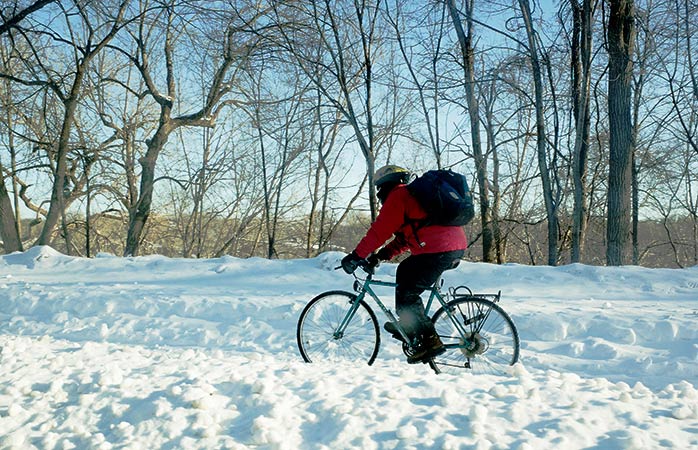 As the only US city to make the bike-friendly city index, Minneapolis can be proud. Unstoppable cyclists do their thing come rain or shine (or mostly heavy snow). Head to specialty bike shops like One on One to see what the bike scene is all about. Get hitched on a fat-tire bike and hit the streets. Refill on nature riding around the Grand Rounds Scenic Byway, a somewhat circular network of parks and lakes that englobes the city. On your way to see the Saint Anthony Falls, cruise through downtown and look up – a second city life is happening in the skyways (closed pedestrian bridges) that float between the office buildings.

Find a flight to Minneapolis 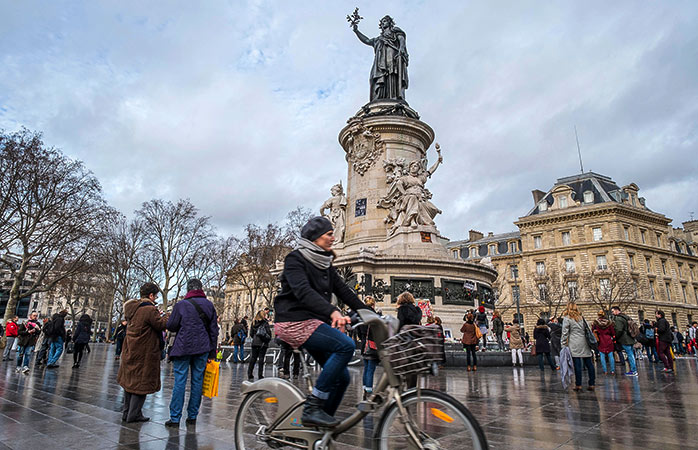 Place de la République, your next stop when cycling in Paris

Cycling in a big city can be intimidating. Paris has many roundabouts that don’t always accommodate the humble bike. Nevertheless, Paris is considered one of the best bike friendly cities thanks to a well-defined set of bike lanes, and great paths that lead you from the center to the greener outskirts. The city’s bike rental system Vélib allows you the liberty to rent a bike and park it all around the city.

Map your bike route on geovelo.fr, know your bike etiquette, and be fearless especially when engaging in busy intersections like Arc de Triomphe – Champs-Elysées or Bastille. From Bastille, follow the Boulevard Richard Lenoir north, making a pit-stop on Place de la République, and continuing along the Quai de Jemmapes. Follow the canal as it bends right towards the Bassin de la Villette where the waterside bike path will take you all the way to peacefully green Parc de Sevran. 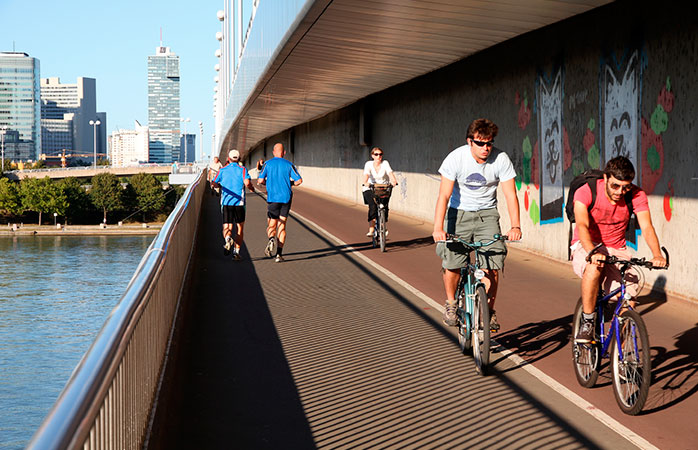 Cycle in Vienna on the Reichsbruecke Bridge over the Danube

The city of Vienna is counting on you and your bike to visit, literally – bike counters set up around the city give cyclists an idea of how many are passing at that point in a day, and the numbers are pretty encouraging.

From the tri-country (Germany, Austria, Hungary) Danube Cycle Path you can easily join the Sightseeing Bicycle Path Ringstrasse set up as an open air exhibit of Vienna’s monuments like the Opera, Parliament, and Burgtheater.

If you plan to visit Vienna in April, don’t miss the Argus Bike Festival with its bike flea market, workshops, and other bike related attractions. A real wheel-turner! 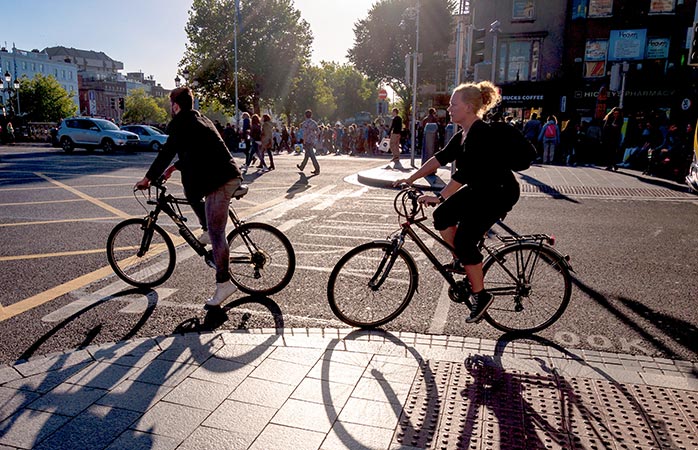 Dubliners know how to get around … on bikes!

Commuters in suits, kids and their parents, curious visitors – join in the stride by getting around by bike. In past years, traffic calming initiatives and successful campaigns have been bringing bikes back.

Enjoy cycling in Dublin by strolling around the North Georgian Quarter, from the brick facades of the 18th century houses on Parnell Street to the charming paved backstreets like Henrietta Street. Cycle towards the modern docklands or brush up on history at the Dublin Castle. If you didn’t feel enough Irish winds in your hair, push your pedals to Sutton beaches via the scenic bike route from Fairview Park that follows the seaside.

Find a flight to Dublin 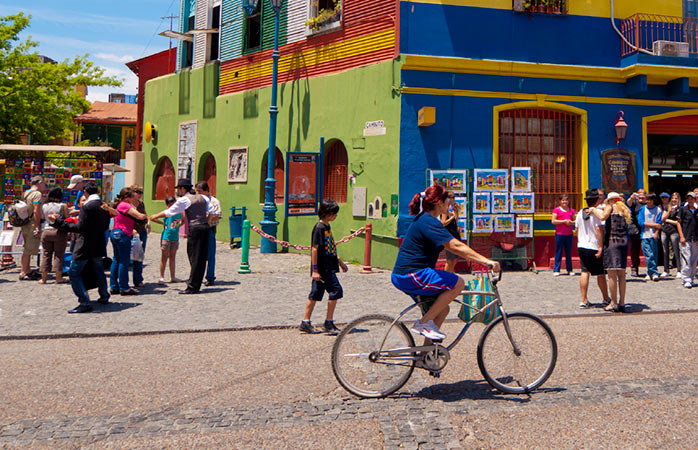 Cycle to the laid-back rhythm of Buenos Aires

Do like the porteños (locals of Buenos Aires) and get yourself riding in style around Buenos Aires, one of the most bike friendly cities in South America. Get the real feel of the city by riding along the bike lanes that follow green oases like Bosques de Palermo, stopping once in a while to grab a coffee, do some yoga, or chat with the dog walkers and their hordes of dogs. From the Plaza de Mayo, you’re in a spin’s distance from landmarks like the Casa Rosada and the May Pyramid, or you can head across the futuristic Puente de la Mujer to grab a bite at one of the many parrillas (food stands) waiting just for you on Ave. Int. Hernan M. Giralt. 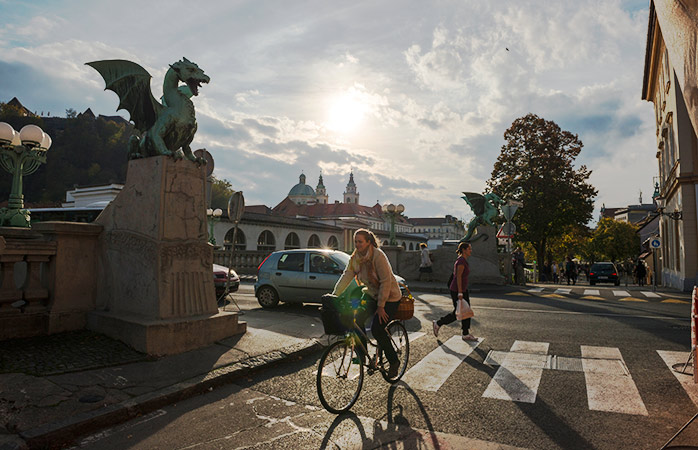 Brave the dragon in Ljubljana

Ljubljana is for lovers – bike lovers, castle lovers, and ecology lovers. Recently awarded the title of European Green Capital 2016, the city’s efforts to think green are visible in its waste management and encouragement to cycle as a means of transportation.

If the force of the city’s emblematic Dragon inhabits you, courageously cycle uphill to the Ljubljana Castle. For those who care less for a view and more for local delights, cycle to Vodnikov Trg where the central markets sprawl across two squares with abundant arrays of foraged vegetables, local honey, and homemade cheeses.

Find a flight to Ljubljana 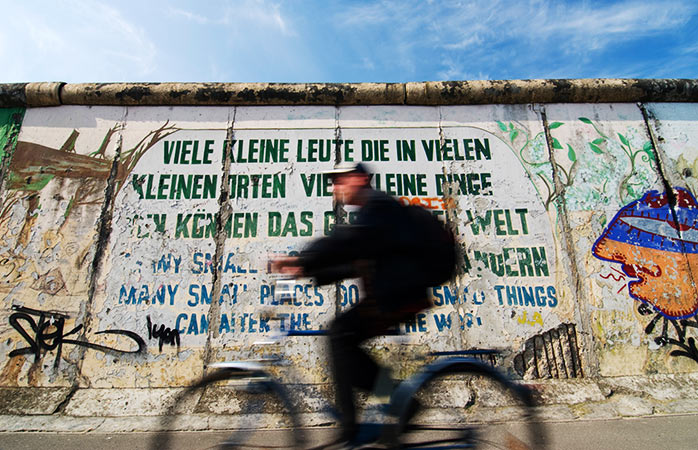 The Berlin wall tells a story you’ll want to follow

Circulating around the city of Berlin isn’t always as safe as the Berliners would like, often putting up with proximity with speeding cars, but nevertheless if you’re just visiting Berlin, the best way to see the highlights is by bike.

A bike path known as the Berlin Wall trail follows what was once the border between East and West – back then impossible to cross, but you’ll be able to discover the likes of the Reichstag building on one side and the Memorial to the Murdered Jews on the other. North of the Invalidenstrasse, you’ll be able to imagine the wall for yourself where parts of the Inner wall still remain. Berlin on bike is a must! 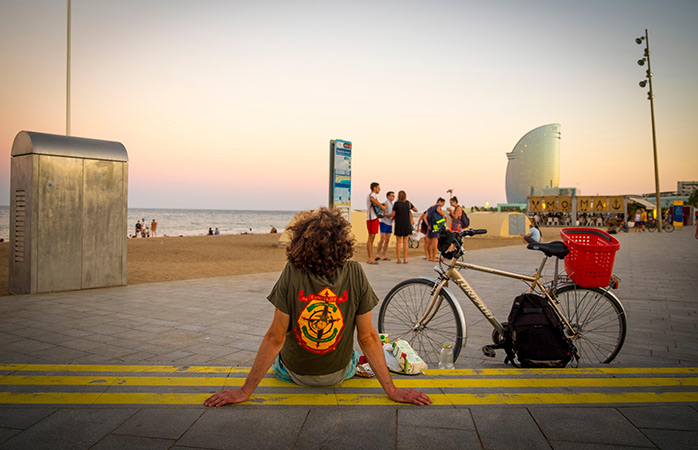 Life’s a beach in Barcelona

Getting around Barcelona by bike just makes sense – great weather to take advantage of, a city too huge to see by foot, and an environmentally aware vibe.

The long beachfront of Barceloneta is where you want to strut your stuff if you like beautiful beaches, but tuck into the backstreets for the charm of small neighborhoods. Dive into the heart of the city by using the bike lanes that take you along the busy Avenida Diagonal to the infamous phallic Torre Agbar tower. As you take the street away from the Sagrada Familia, admire the famous facades and luxurious boutiques as you stroll down Passeig de Gracia. Check out these tips to get more ideas of what to see for free in Barcelona. One day, one bike, many sights!

Find a flight to Barcelona

To find out more about the Bicycle-Friendly Cities, check out the Copenhagenize Index page.

Continue to part two for the top 10 bike friendly cities 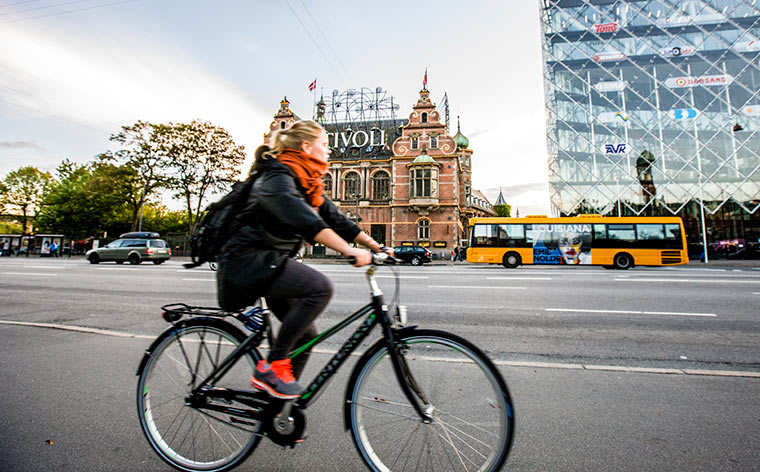 The most bike friendly cities for the cycling traveler – part two 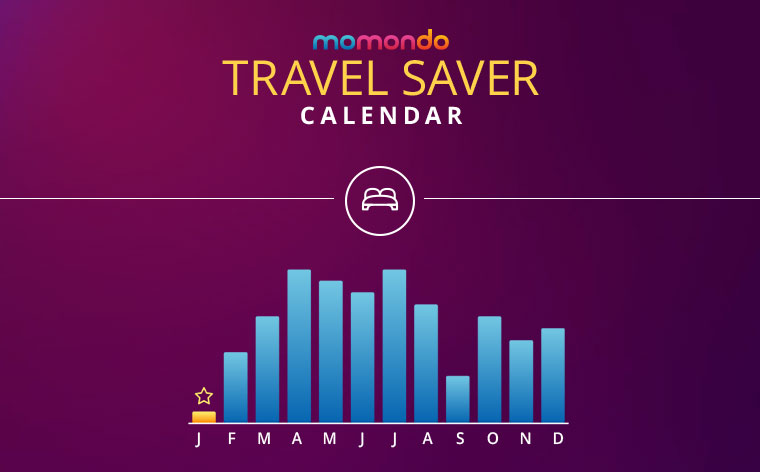