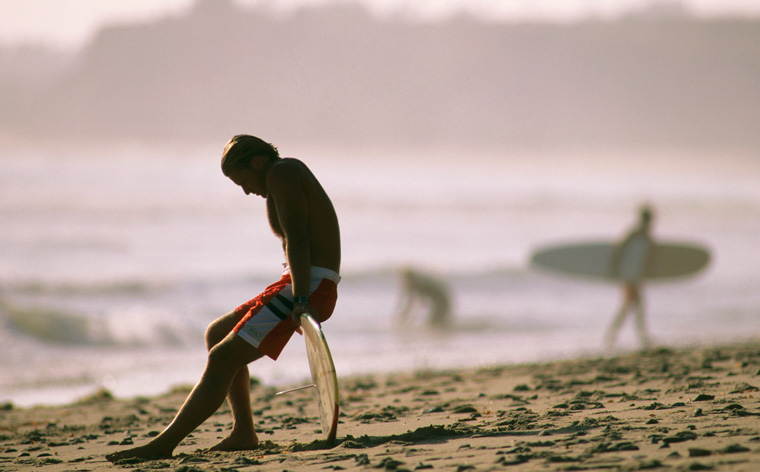 DiscoverBeachesSurf’s up! The best destinations to ride the wave this season

Wax that board and hit the water! Our list of surfing holidays for beginners, experts, and everything in between will have you dreaming of the perfect wave

Contemplating the next wave in San Onofre, California

The sun has barely risen, yet the sleepless ocean calls upon its faithful disciples – the surf belongs to those who wake up early. Snag a chance for first class, front row wave riding in our favorite surfing destinations, adaptable for beginners and the more expert boarders. 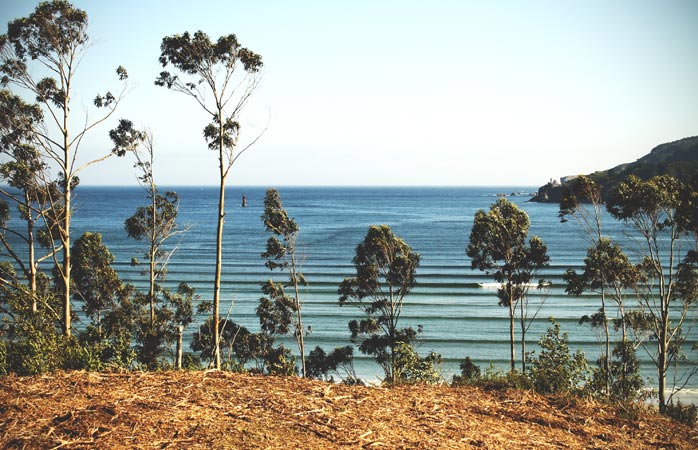 Behind dry hillsides, past the fields tended to by farmers from isolated villages, lie the beaches of Galicia. It’s not about a pinpoint on a map, here you just grab your board and surf wherever the waves call you. Hidden from the rest of the world, one could consider these deserted beaches to be a sort of national treasure the Gallegos (Galician people) want all for themselves. At the base of 2000-feet-high cliffs crash the best waves, with chilly Atlantic waters to cool off under the hot Spanish sun. On the Iberian Peninsula, a morning of surf deserves an evening of hearty seafood dishes facing the sunset. And what’s best is the pristine landscape is yours to enjoy without hordes of tourists around.

Find a flight to La Coruna 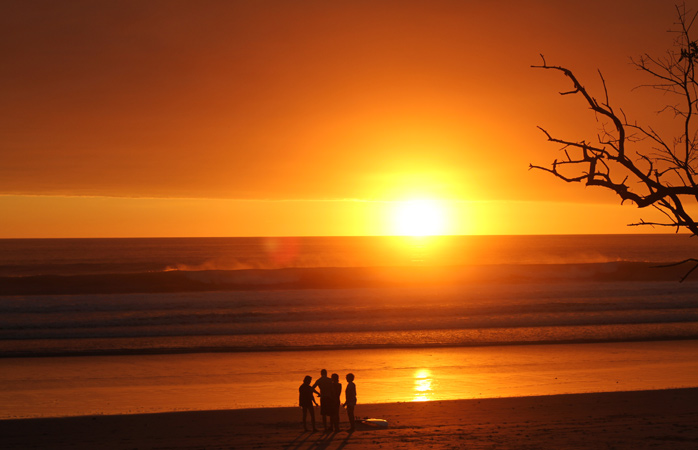 South of India, bathed in the Indian Ocean, is scenic Sri Lanka. And if you keep going to the most Southern coast, you’ll find the best beaches like Kamburugamuwa, Gurubebila, or the charming Weligama Bay. As if the gods of surf made a place with the perfect surfing conditions, here you’ll find a dry climate from April to October, 6-foot waves, and a consistent swell in gorgeous jade waters. If you’ve mastered the skills of the local stilt fishermen, bring your gains back to shore for a barbecue. Refuel on a fiery dish with a side-order of charm and exoticism.

Find a flight to Sri Lanka 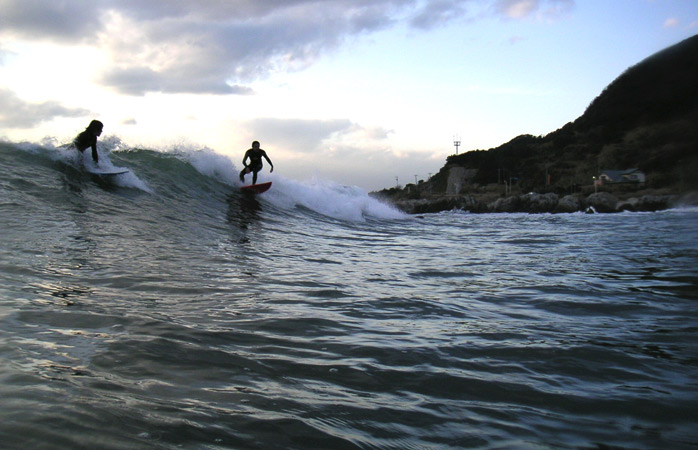 For the more competent surfers, the coast along Chiba Prefecture offers challenging waves and powerful beach breaks. Far enough from Tokyo (about a 2-hour drive), the area, specialized in flower and strawberry farming, is littered in beaches with a laid-back, countryside feeling.

From August to October, locals wait for the waves brought by typhoon season. Crowds invade the beach on weekends to admire the expert surfers, but if you ride the waves early, the only crowds are the cormorants lodged in the nearby cliffs.

Cool off by trying the summertime specialty Nagashi Somen, cold noodles served floating down bamboo slides filled with water. For late barbecues and fireworks, Chikura Beach has got you covered.

Find a flight to Tokyo
Read more: Explore Japan’s culinary scene with our guide to the best street markets to grab a bite at 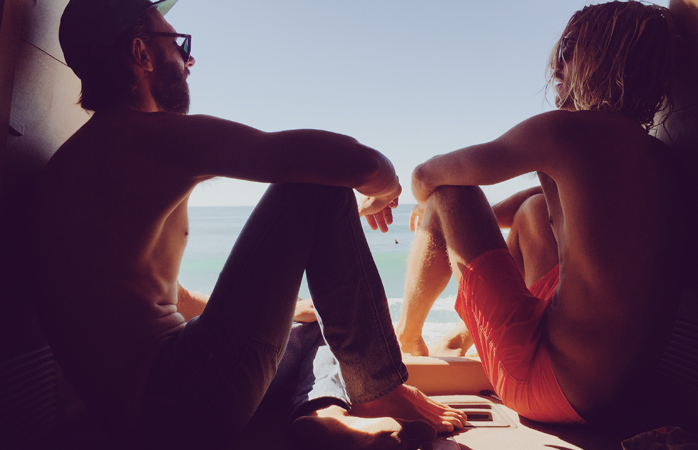 When The Beach Boys wrote Surfin’ U.S.A, they had San Onofre in mind. Any of the three well-preserved beach areas – Trestles, Old Man’s, Trail – offer world-class waves for different skill levels. If you can ignore the nuclear power plant, you’ll be joining the circus of California dudes perfecting their aerial skills.

Beginners and surf veterans merge on the waves, the beach, and the parking lot for customary tailgating. To share the waves with only a handful of surfers and the occasional seal, get there at dawn before the crowd. Dry yourself off on the ride aboard the Pacific Surfliner train to Encinitas. Your surfboard in one hand, a fish taco in the other – the perfect summer combo.

Find a flight to San Diego 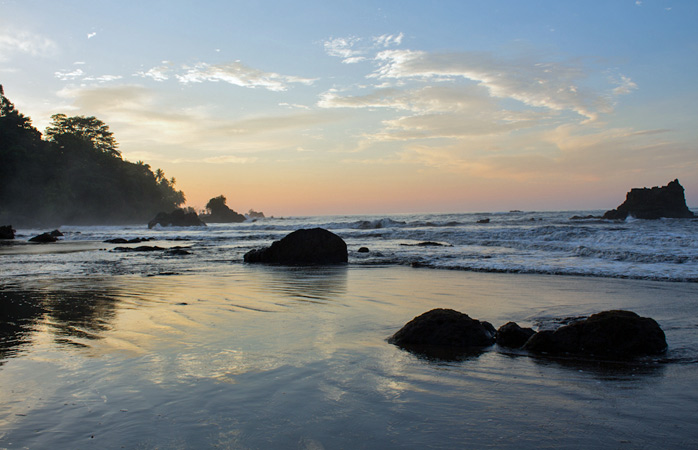 Paradisaical Nuquí is all yours © luis perez

Deserted beaches with perfect surf do exist. To get to Nuquí, reachable by plane from Medellín or by a half-hour boat ride from Guachalito, you have to either really know the place or really love venturing through dense jungle.

Surf the tubes at Pico de Loro beach with the rock formation looming over each wave, ride the challenging waves at Cabo Corriente, or explore the area’s palm-covered cliffs.

When the board has got you beat, trade the surf for some stand-up paddle (SUP). It’s especially great from July to October to get really close to migrating whales.

Read more: Go off the radar with a foray along Colombia’s Caribbean coast

Find a flight to nearby Medellín 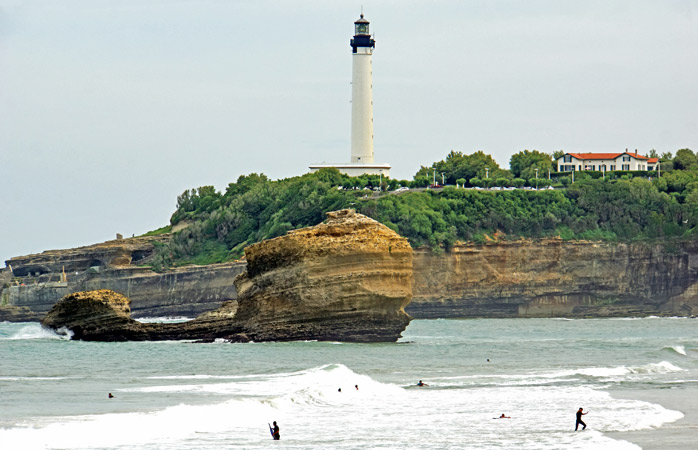 The lighthouse, the cliffs, the surf – you’re in Biarritz © archer10

Biarritz is a city of contrasts, with its historical 19th century architecture mingling with seaside resort hotels, bars, and clubs for the hip, young crowd. Before hitting the beaches, stop by the Rocher de la Vierge to pray you’ll get some great waves, and fill up on fresh oysters at the market hall.

Biarritz is humbly known as the birthplace of surfing in Europe, discovered in the 1950s by surf pioneers Tontons Surfeurs (the Uncles of Surfing), inspired to ride a board after watching an American documentary about surf. With its wonderful climate and strategic location, wrapped in Atlantic waves, it’s no coincidence Southwest France is still today one of Europe’s most vibrant surfing communities.

There are endless surf beaches both in Biarritz and around the whole Basque country – for beginners and board buffs alike – popular from April to October. In an hour you are in San Sebastian and catching waves amidst tapas restaurants and narrow alleys.

Find a flight to Biarritz 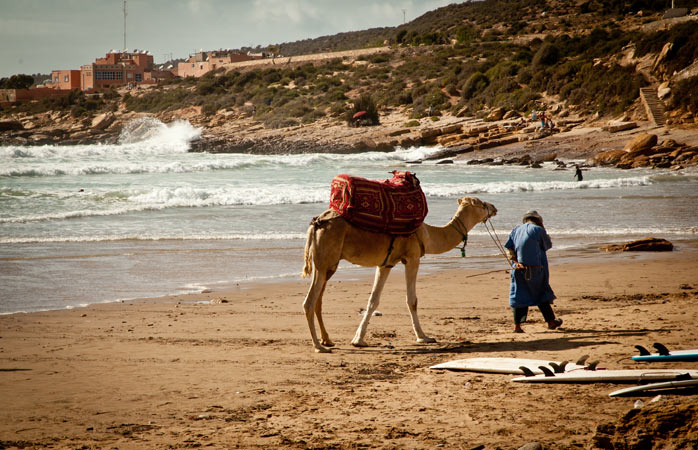 Riding waves or riding camel back in Morocco © eelke dekker

Water over 68 degrees even in the winter months, spiraling waves at low tide, cheap living – Morocco ticks all your surfing holidays’ expectations off the list. Fishing village Taghazout makes for a great surf town, attracting a young, international crowd of surf school students.

Throw yourself head first into Anchor Point, previously home to an anchor factory, to carve the waves before they crash onto the flat, red rock beach. No alcohol is served here, so bring what you need from Agadir 12 miles away, stopping for a photo-op with goats climbing atop trees for nuts, a likely sight along the way. Extend your summer and come here towards September and October for the first winter swells and calm winds (or escape winter altogether, enjoying the best surf from December to March).

Find a flight to Agadir
Read more: Explore Morocco from north to south with our helpful guide 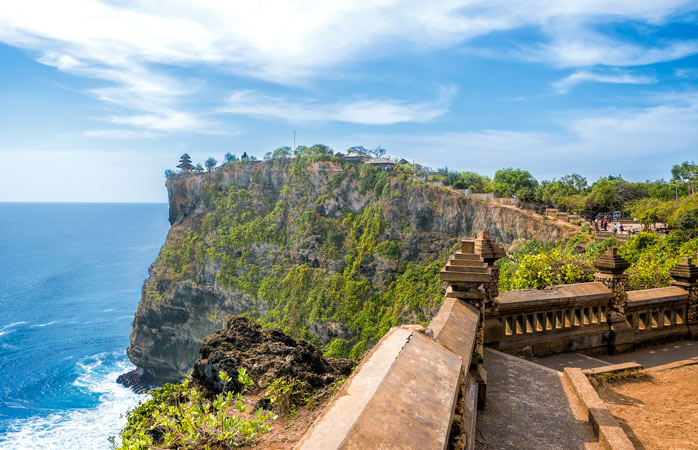 Uluwatu is one of Bali’s emblematic surf spots, made all the more special by the ancient Luhur Uluwatu Temple that overlooks the ocean below it with a majestic air. Descend the 230-foot drop from the temple to the water and you’ll be met by waves that vary between 3 – 10 feet in height, making them ideal for beginners and intermediates. This also means that there can be crowds here from time to time, particularly if the waves are low. Come early if you want the beach for yourself. Once you’re done in the water, treat yourself to an apres-surf massage or grab a bite at one of the small warungs (family-run kiosks) on the water’s edge.

Find a flight to Denpasar
Read more: Discover the real Bali with our insider’s guide to the island 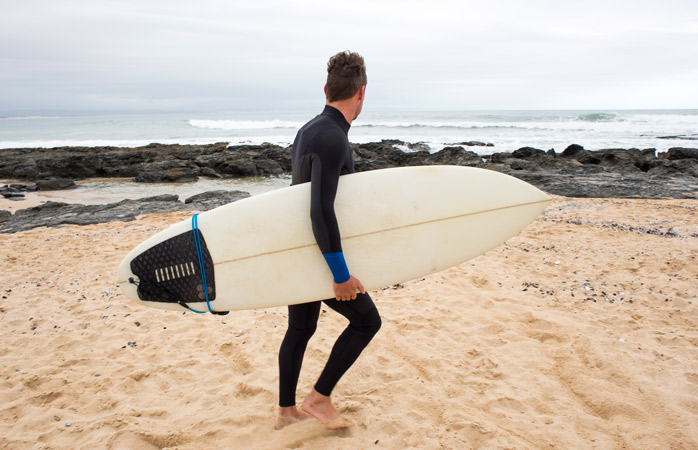 Grab your board, don your wetsuit and pit your wits against the waves at Jeffreys Bay

Located just over an hour’s drive from Port Elizabeth, J-Bay, as it is known locally, has waves that can run along the shoreline for up to a half mile, offering an entertaining ride that seems to roll on forever. In the surfing world, this is as near to perfect as it gets, with an ever-changing array of tubes, barrels, and other wave combinations that can be surfed by beginners and pros alike. Toss in the prospect of surfing the waters in the company of dolphins and you’re looking at an all-round experience in the Indian Ocean. When you’re out of the water, take a moment to admire the area’s pristine white beaches and the plethora of shells that decorate the shoreline. 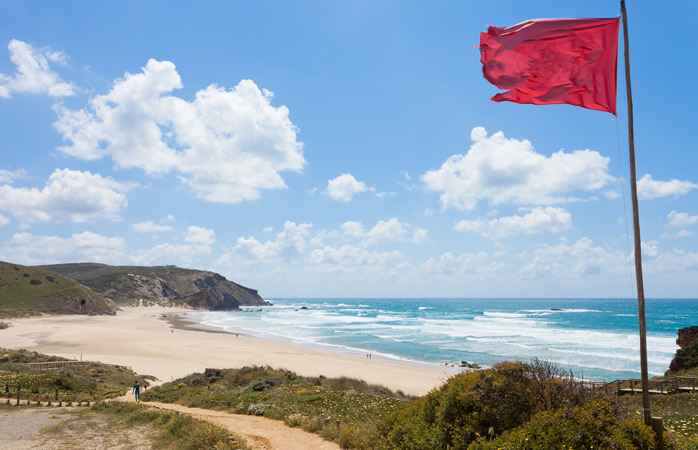 Portugal is home to some of the world’s best surf spots, compliments of the great waves of the Atlantic, which travel many miles before they crash along its western shoreline. As a result, you’ll find a surf spot to suit every taste and match any difficulty level.

One destination that is particularly noteworthy is Praia do Amado, one of the Algarve’s iconic beaches, which offers a stable flow of waves that are easy to surf all year round.  This makes it a great spot for beginners, who would like to master the basics of surfing before testing their mettle on more challenging surf spots in Portugal.

If you fancy more of a challenge, head north along the coast to the resort town of Ericeira, where a mix of easy to hard waves awaits. For the pros, the endearing fishing village of Nazaré, located one hour and 45 minutes from Lisbon by car, is home to some of the largest waves ever surfed, with some stretching up to 100 feet above the surface of the water.

Find a flight to Faro
Read more: Check out our infographic – 10 unmissable spots that make Portugal a surfer’s paradise

Looking for more travel inspiration? If the waves can wait, take a dip in these unbelievable hotel swimming pools 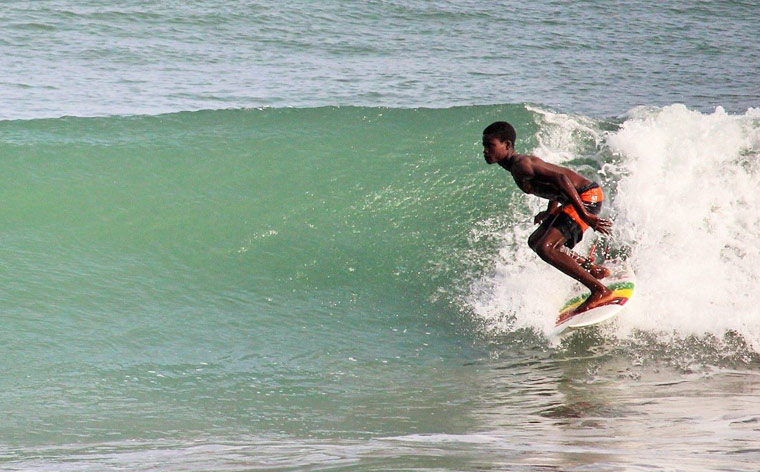 Surfing in Ghana: world-class waves without the crowds 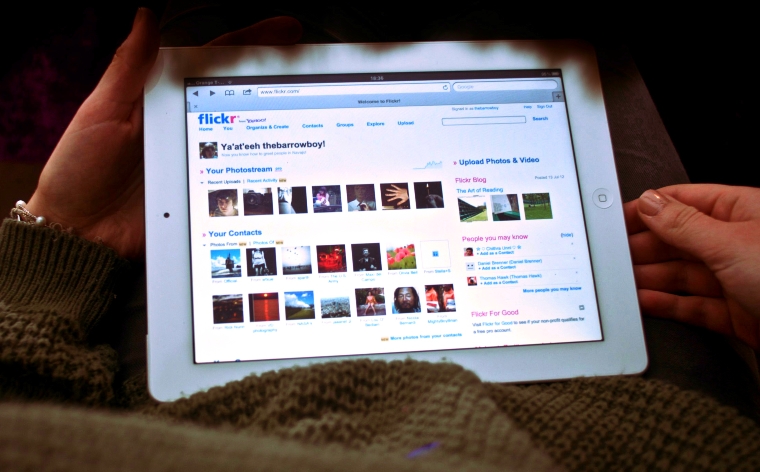 Surf while you fly: which airlines have the cheapest in-flight WiFi? 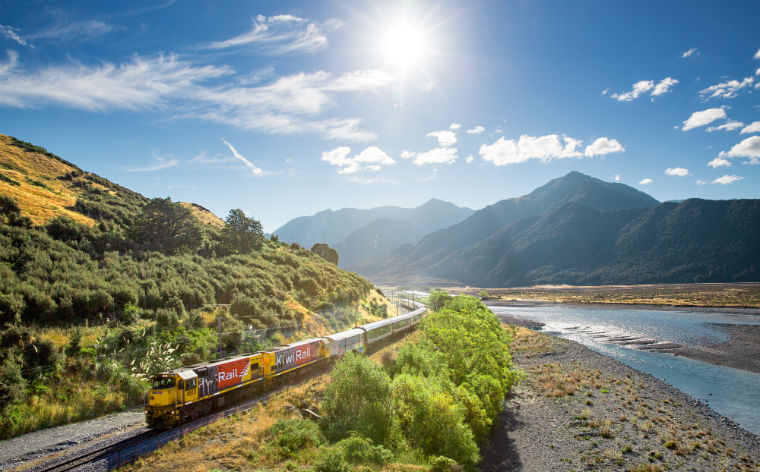 Ticket to ride: great train journeys around the world

DiscoverBeachesSurf’s up! The best destinations to ride the wave this season