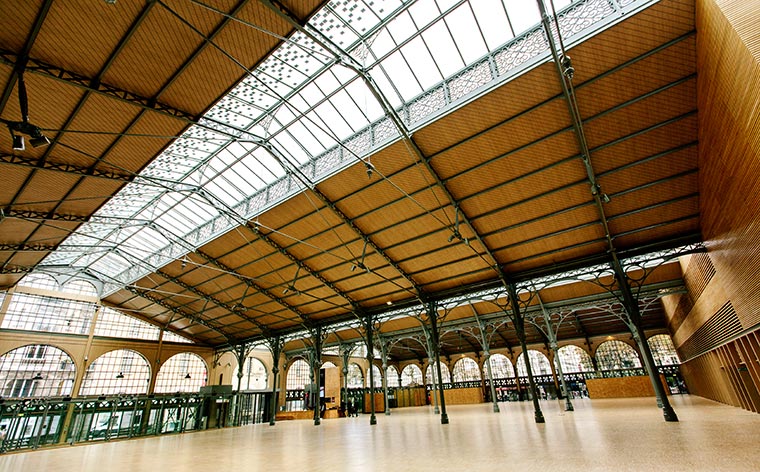 Paris reigns as one of the most visited cities in the world, with must-sees at every turn. For some off the beaten track sightseeing, explore these 12 little-known spots and things to see in Paris

There are so many things to see in Paris – the Eiffel Tower, the Louvre Museum, Notre Dame. The list goes on.

But there are plenty of places where you can escape the tourist mayhem. Here are 12 lesser-known spots, hand-picked from our Paris city guide, momondo places. Download it now for free! 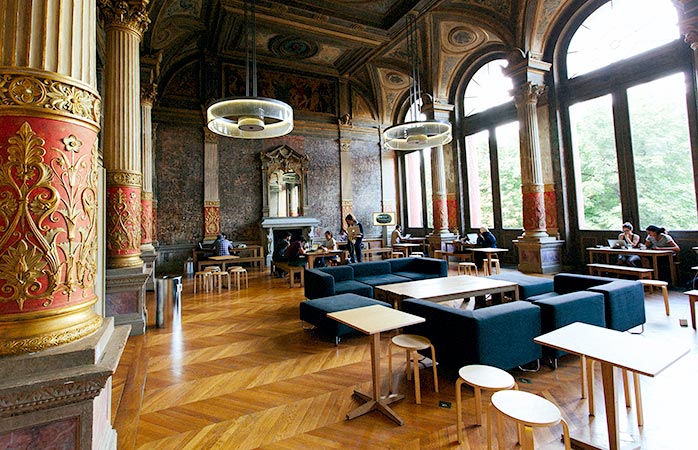 Focused on art and creativity in a digital age, La Gaîté Lyrique is a museum for adults and children alike. Housed in a former 19th century music hall, the classic baroque architecture contrasts beautifully with the hyper-modern subjects being exhibited.

Events range from interactive concerts to workshops, imaginative storytelling and drawing, dance performances and more. There are also a variety of activities for children, so don’t shy away from bringing the little ones along.

The futuristic, free library on the first floor is open to everyone and worth a browse – besides a wide-ranging collection of books and cultural publications, a handful of consoles are available for the video game-fanatics.

Read more: How to get from Paris airports to the city centre 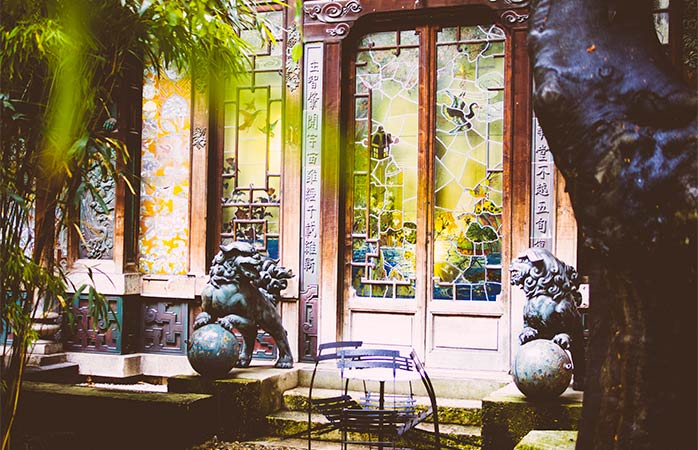 Paris just loves the movies! Having said this, there is only one single movie theater in the 7th arrondissement but, in exchange for its exclusivity, it is truly the most beautiful in the entire city.

La Pagode is a real Japanese pagoda (a tiered tower), where the walls in the biggest screen room are hung with silk, the candelabras are held by golden dragons and elephants, and warriors stand poised for battle on the painted ceiling.

It also has a wonderful Asian garden, which has been given a protected cultural status for its beauty, where you can enjoy a ginseng tea and delicious tarts after the film viewing.

Find the schedule on the cinema’s website or buy the weekly guide Pariscope. 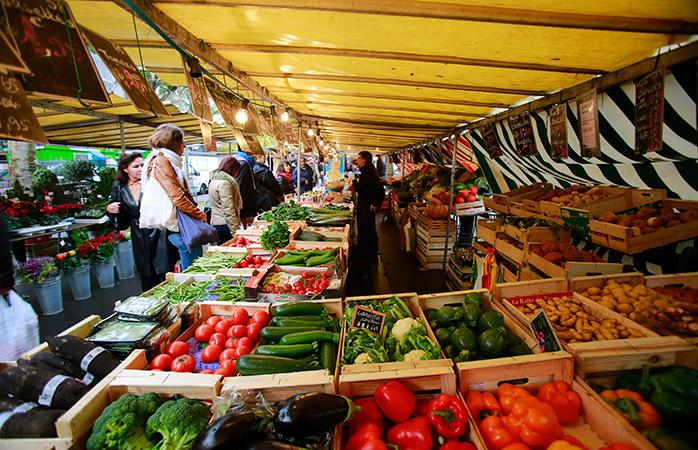 You’re greeted by the smell: the spices, the fish, the oil and the strange edible roots, the stalls with yams and freshly roasted chicken.

The market in Belleville is one of the most popular and ethnically diverse in Paris, and can take you for a journey around the world in just one morning, when Chinese, Orthodox Jews, Middle Eastern and African women with wax printed head wraps buy groceries for the week, and a little bit of added bric-a-brac.

The customers in Belleville aren’t rich, in fact it is the poorest neighborhood in the city and as a result the prices are low. If you can shimmy your way through the crowd, you can find some really good bargains in Belleville. 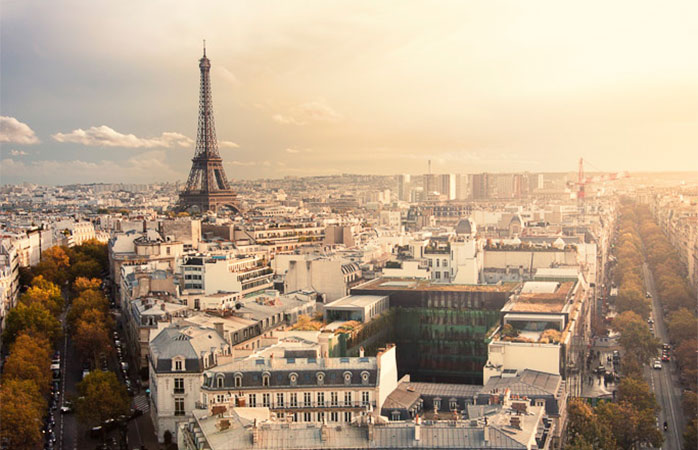 For children and high-flyers, Le Ballon de Paris is a really good alternative to the Eiffel Tower. Why wait in a claustrophobic queue to get nudged and pushed, when you could float in the air, looking over the entire city?

The balloon is as tall as a twelve-story building, and it is a dizzying feeling when the balloonist lets go of the cable and it rises into the air. Suddenly you are up there, at a height of 490 feet, swaying in the wind.

The balloon is permanently anchored in the Parc André Citroën, which is worth a visit in itself. From the first sunny spring days, the park is filled with Parisians who picnic, read or sunbathe on the grass. A special attraction is the fountain with its many springing jets of water that kids love to race through. 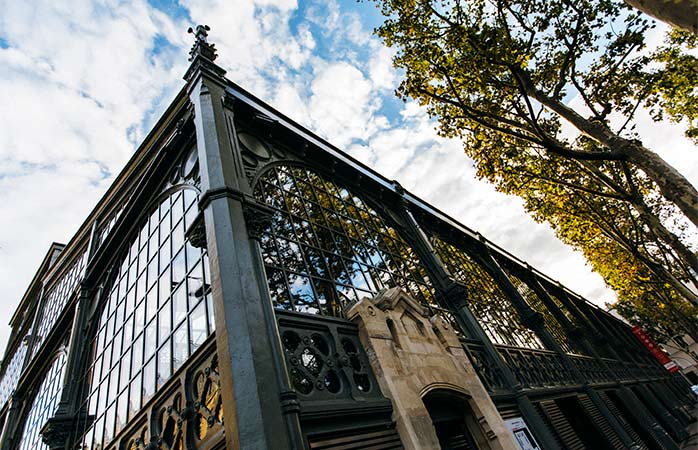 As its name suggests, this location has been central in French history from the time of the Templars and Crusades.

Today, the lofty market hall is a cultural centre open to the public. Though it is closed for a month during the summer, Le Carreau du Temple more than makes up for it the rest of the year. A contemporary program of theater, concerts, exhibitions, festivals and fairs – with themes as diverse as shoes, street-food, dance, cultural identity, sport and jazz music – make it a dynamic and stimulating space.

Its community-focused environment offers a contrast to the tiny art galleries and fashion stores in nearby Marais. 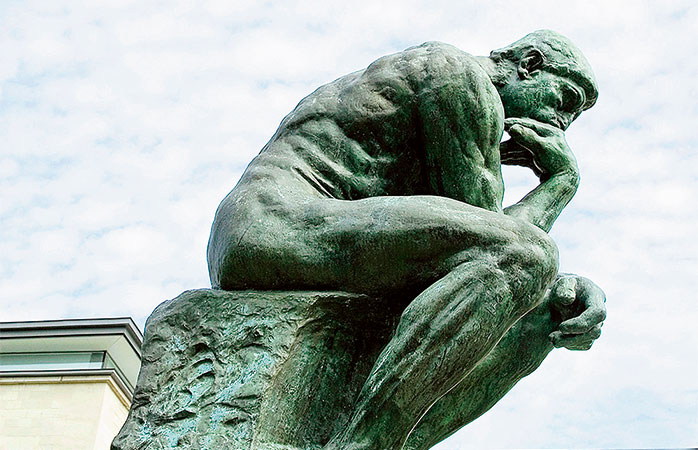 The Musée Rodin is without a doubt the loveliest museum dedicated to a single artist in Paris. It is crammed with the sculptor’s sensual and moving works such as The Thinker, The Kiss, The Gates of Hell and The Burghers of Calais.

Auguste Rodin began drawing when he was ten-years-old, and his talent was so obvious that he was admitted to an art school at the tender age of 14. He became both celebrated and infamous at a relatively early stage of his career, and he was often thought of as a bit too advanced for his time.

You should go there on a sunny day, as the garden is an important part of the experience. Outside the museum you can find a series of Rodin’s masterpieces between wide lawns, shadowy avenues and 2,000 rose bushes. 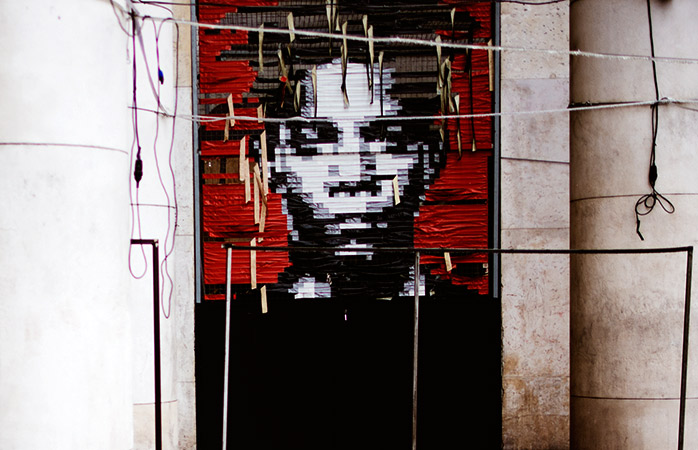 The Palais de Tokyo is one of the largest sites for contemporary and modern art in Europe.

It is not a museum in the traditional sense – the Palais de Tokyo refers to itself as an anti-museum. The exhibitions play with the question, “What is art?”, and challenge you to take part in the debate. It is a face-to-face experience with some of the most brilliant works of art of our time. Children will find it exciting as well.

The adjacent restaurant, Tokyo Eat, will tempt you with its inventive cuisine and interior design. 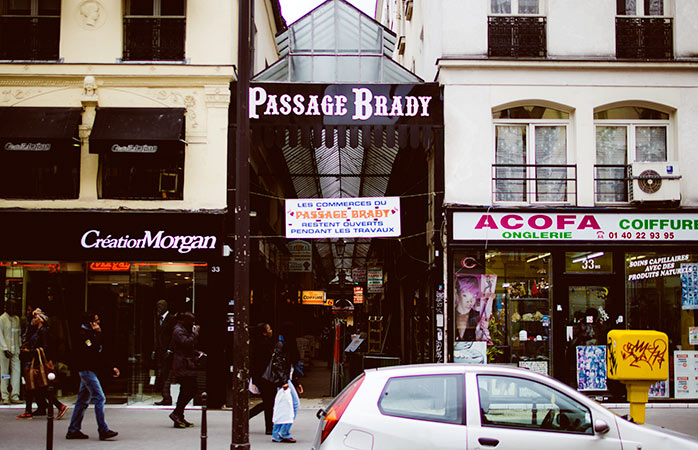 In a neighborhood as trendy and multi-cultural as the Grands Boulevards, one curious turn down the small Passage Brady and you will find yourself immersed in Paris’ thriving Pakistani and Indian communities.

The passage is from 1854 and is not nearly as pretty as many other passages in Paris, primarily as a result of poor maintenance and holes in the glass ceiling letting in rain on bad days. The atmosphere, however, is 100% authentic, and you can buy colorful saris, try the best chicken vindaloo in town, or visit a traditional New Delhi barber and beard trimmer.

Passage de Pondichéry at no. 84 is also a good place to eat, but remember to choose the correct side when you look for Passage Brady: it is divided by Boulevard de Strasbourg and the part that isn’t roofed has somehow become home to shops renting party clothes and costumes, which isn’t nearly as interesting.

Read more: What to do in Paris for free! 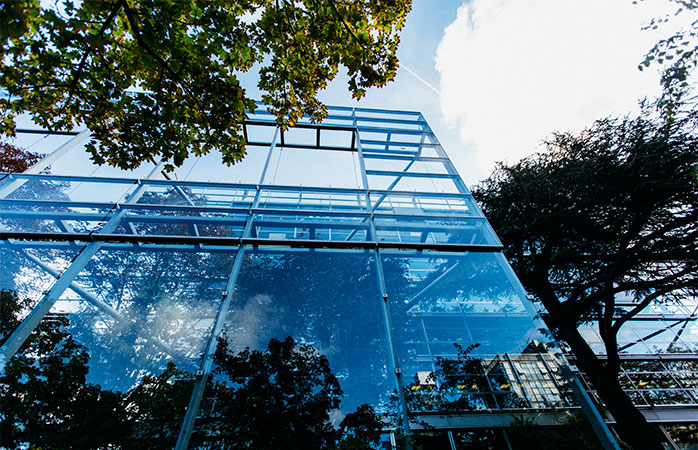 With a knack for zooming in on the contemporary art scenes of different regions around the world, Fondation Cartier expertly tailors special events to complement the themes of its exhibitions. From concerts and radio broadcasts to poetry readings and dance acts, there is something for every taste.

An impressive all-glass, cube-like structure, the museum is also surrounded by a charming garden, accessible to the public between July and September.

Not sure the kids will appreciate contemporary art? Fondation Cartier also offers tours and workshops specifically aimed at translating the space and its exhibits for the younger ones.

Restaurants at the flea market 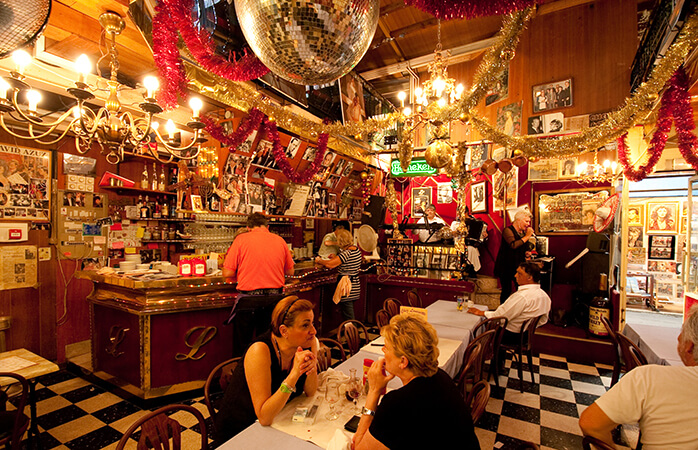 Tired after browsing through antiques? Take a lunch break and recharge your batteries. There are a number of excellent restaurants hidden around the outskirts of Paris in Saint-Ouen, which also hosts a fantastic flea market Saturday through to Monday.

At Le Biron on 85 rue des Rosiers in Saint Ouen you could be lucky enough to meet the American superstar Lenny Kravitz or the French actress Mireille Darc, eating artichoke tureen or preserved veal.

And at no. 136 Avenue Michelet, you will find the kitschiest eatery at the market – Chez Louisette has colored lamps and French Yé-Yé (a genre of twee pop music) coming out of the speakers. At this place the food almost serves as garniture, while Le Paul Bert is the place to go to if you want to rub shoulders with the antique dealers. 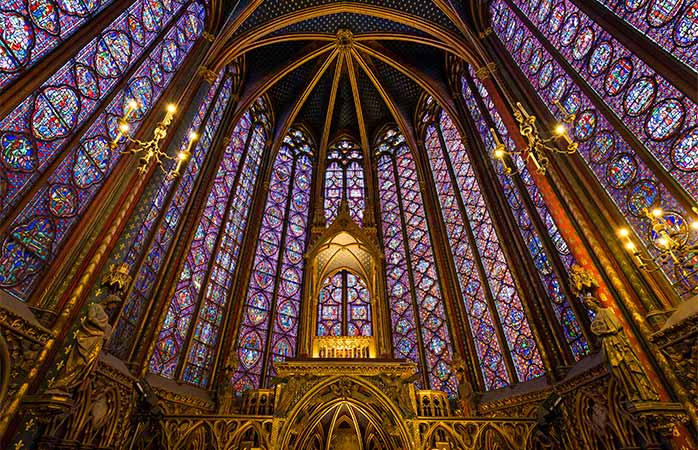 It is not particularly well-known, and many Parisians have never even been there, but Sainte-Chapelle is hands down the most beautiful church in Paris.

You can find it tucked away in the middle of the court of the Palais de Justice, currently home to courtrooms and court registries. As a result, you have to go through security checks and have your bag checked before entering the chapel.

Originally, Sainte-Chapelle was the private church of the French kings, and although it is less spectacular than Notre Dame, the atmosphere is nothing short of magical. The upper chapel, dominated by huge glass mosaics, is particularly mesmerizing. The light shines through the panes, illuminating more than a thousand scenes from the Bible in rich and vibrant colors. 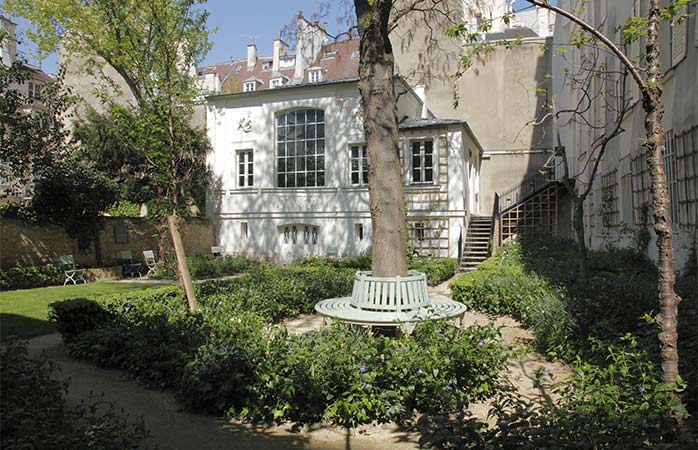 Musée Eugène Delacroix is a little museum in the apartment where the painter lived and worked until his death in 1863. The museum is situated on Place Furstenberg, which is one of the most romantic squares in Paris with its Paulownia trees and beautiful buildings.

Although many of his best-known works are currently displayed at the Louvre, you get a special, intimate experience from walking around the artist’s red-colored rooms and studying the sensuous paintings and drawings on display.

The museum opens up to a little garden, where you find Delacroix’s atelier. Today, the garden has been recreated to resemble what it must have looked like in his day.

Ready to explore the hidden gems of Paris? Find a flight to Paris with momondo.

For more tips, download our updated city guide for Paris featuring more than 200 recommendations from locals. 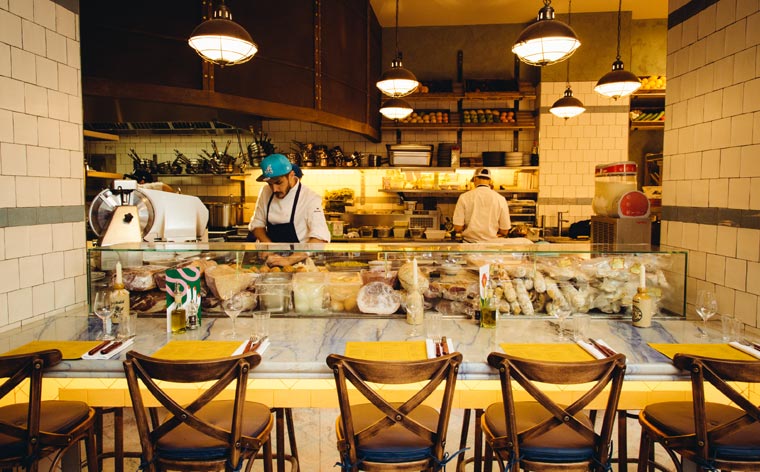 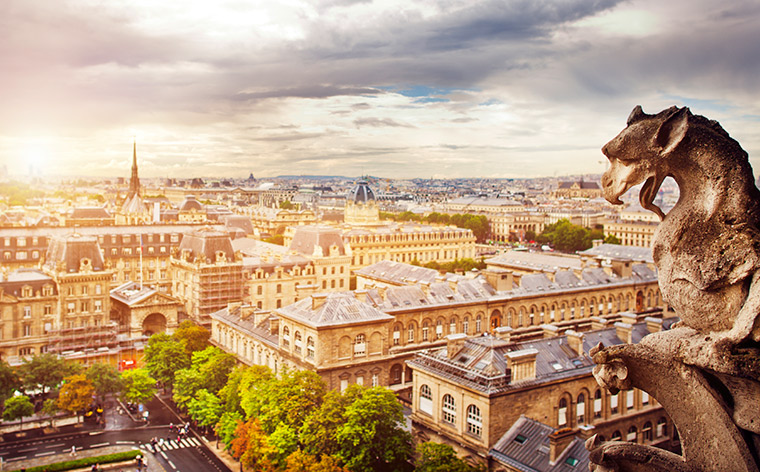 How to get from Paris airports to the city center 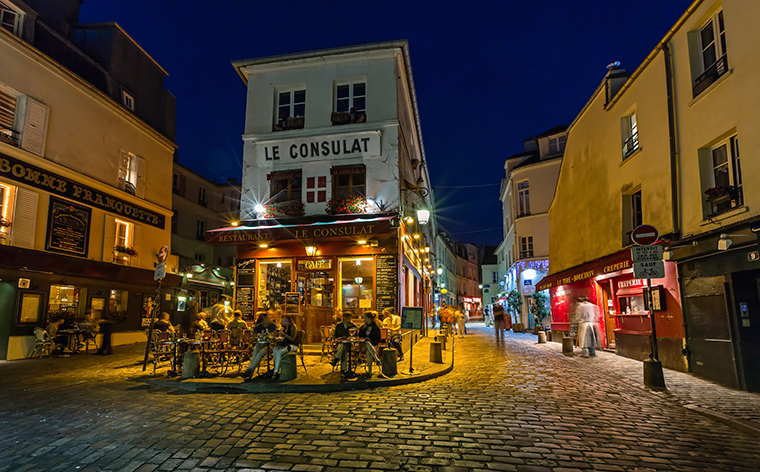 A day in the north of Paris: what to do in one of the best Parisian quarters