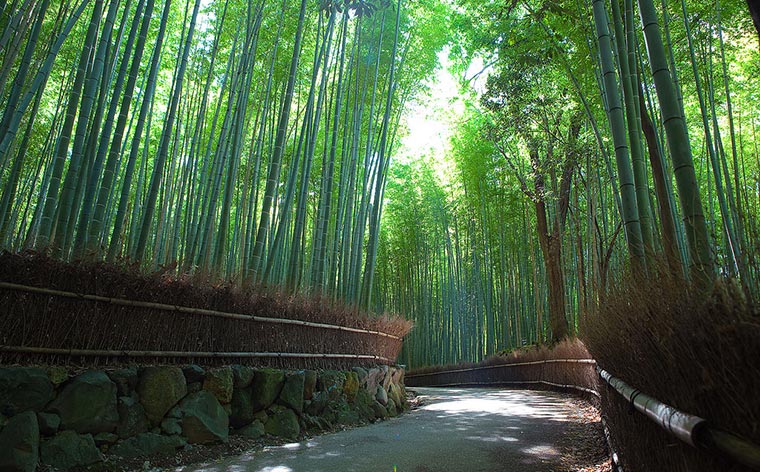 Here we’ve picked our top 10 favourite forests from across the planet.

From lush rainforests, watery wonders, ancient woodlands and everything in-between; reconnect with nature at one of these stunning spots. 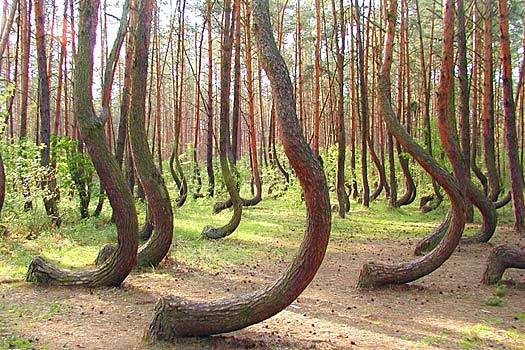 The Crooked Forest. Photo by KILLTHEMWITHKINDNESS

Looking like it fell out of a surreal Salvador Dali painting, the Crooked Forest (Krzywy Las) outside Nowe Czarnowo, Poland, has intrigued the public for over 80 years.

The grove of about 400 pines was planted around 1930 in the former German province of Pomerania.

The accepted cause of the forest’s distinctive curve is some form of man-made tool or technique, but the method and motive remain unknown. 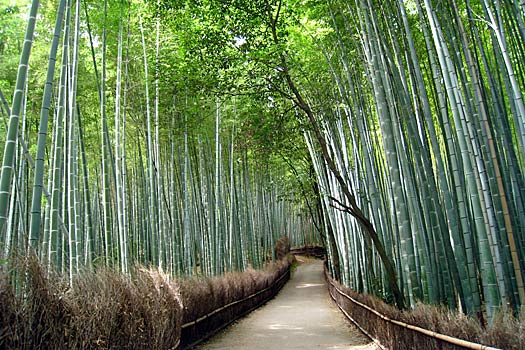 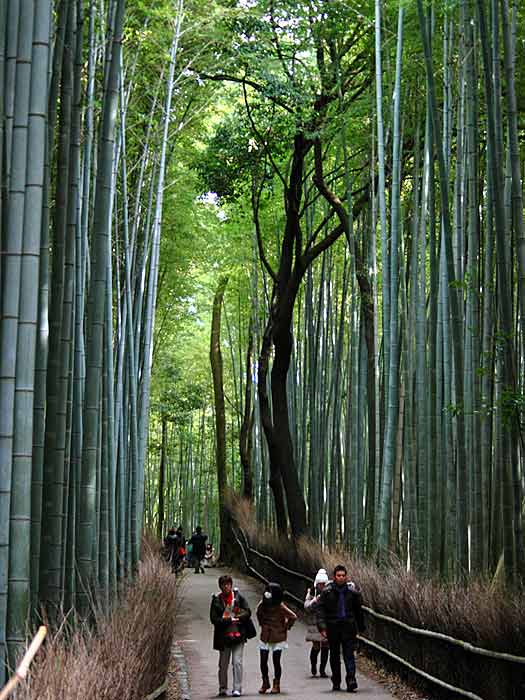 Arashiyama, on the outskirts of Kyoto, has been a tourist hot-spot since the 8th century. The park is particularly popular during the spring when the cherry blossom bloom and in the autumn when the forest takes on a hue of fiery oranges and reds.

Within this nationally-designated Historic Site and Place of Scenic Beauty lies the impressive bamboo forest of Sagano. A path cuts through the towering bamboo grove and when the sun is shining and a gentle breeze is blowing, the setting is truly picturesque. 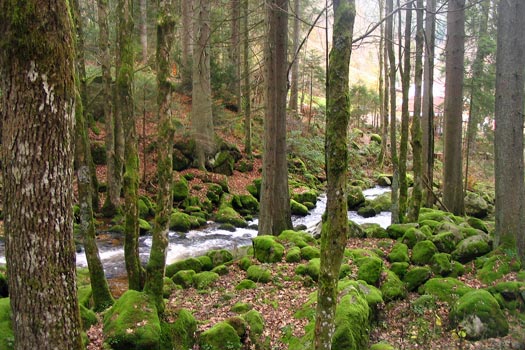 The Triberg area of the Black Forest. Photo by Benjamin Vander Steen 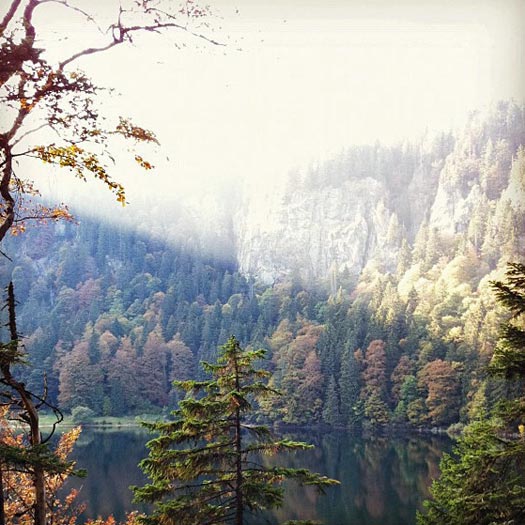 Dense conifers of the Black Forest. Photo by Jan Jacobsen

No list of enchanting forests would be complete without the Black Forest (Schwarzwald) in Germany. This wooded mountain range in Baden-Württemberg, was named by the Romans because dense conifers blocked out most of the light inside the forest.

The forest is made up of peaks, rivers, lakes, towns, waterfalls, footpaths, mountain biking and cross-country skiing trails and unique wildlife.

But it’s not just natural beauty on offer.

The area has strong culture that includes a tradition of wood-carving (particularly Cuckoo Clocks) and food (Black Forest ham, gateau and gourmet cuisine). 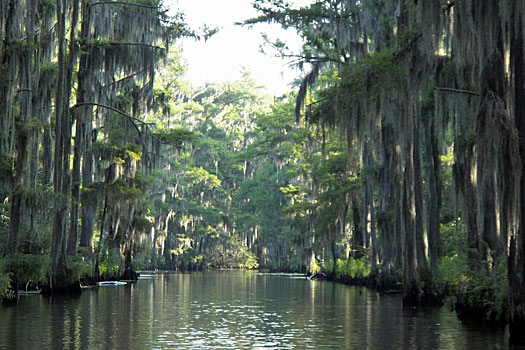 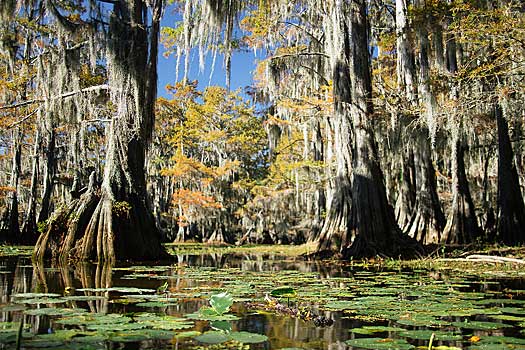 Despite the name, this is one fantastic forest.

Located on the border between Texas and Louisiana, Caddo Lake is a 25,400 acres maze of waterways, bayous, sloughs, channels, islands and cypress thickets dripping with Spanish moss.

Named after the South-Eastern Native Americans who lived in the area until their expulsion in the 19th century, the lake is home to the world’s largest cypress forest.

This internationally protected wetland hosts a variety of wildlife, including beavers, woodpeckers, owls and even alligators. 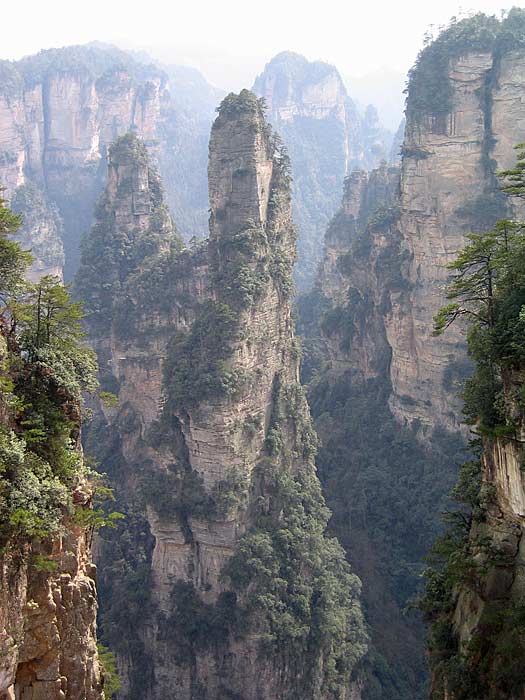 Located in Zhangjiajie City in northern China, this unique national forest was named a UNESCO Global Geopark in 2004.

The most notable features of the forest are the giant pillar-like formations that are seen throughout the park.

The year-round wet weather is the reason for the park’s dense foliage. 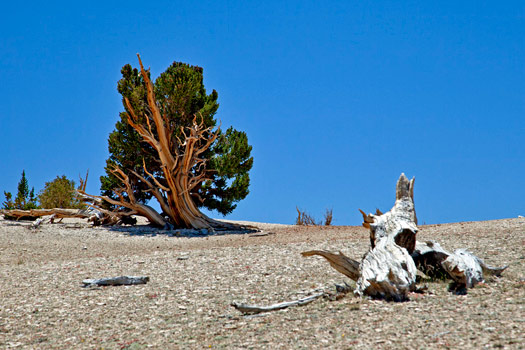 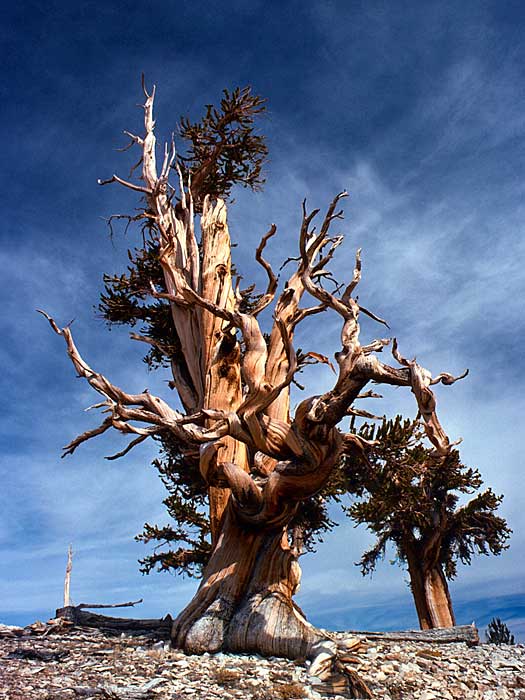 Step back into prehistoric times high in the White Mountains in Inyo County, California, to Ancient Bristlecone Pine Forest.

The forest protects the oldest trees in the world including the Methuselah tree – one of the world’s oldest living organisms.

Named after Methuselah, the oldest Biblical figure, the Great Basin bristlecone pine is about 4845-years-old.

The tree’s exact location is a closely guarded secret to protect the living legend from vandalism. 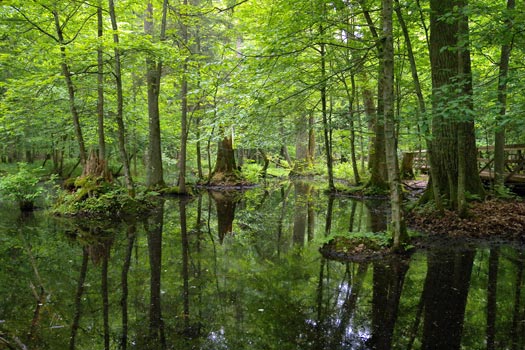 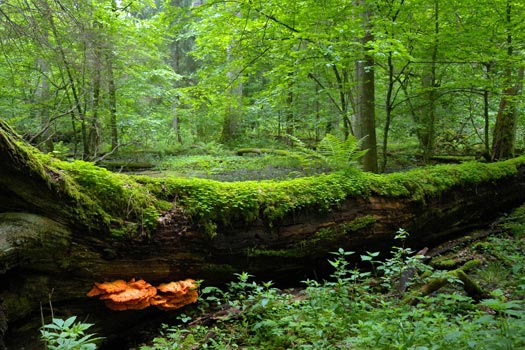 Białowieża Forest is an ancient woodland that runs along the border between Belarus and Poland.

This UNESCO World Heritage Site is one of the last, and largest, remaining parts of the primaeval forest that once stretched across the European Plain.

Due to the lack of facilities tourists rarely visit the Belarusian side, however approximately 200,000 travellers head to the Polish section annual taking guided tours of the park on foot or by horse-drawn carriage.

The forest is home to a number of large, ancient oaks, some with their own names, including the King of Nieznanowo, Emperor of the South and the Guardian of Zwierzyniec. 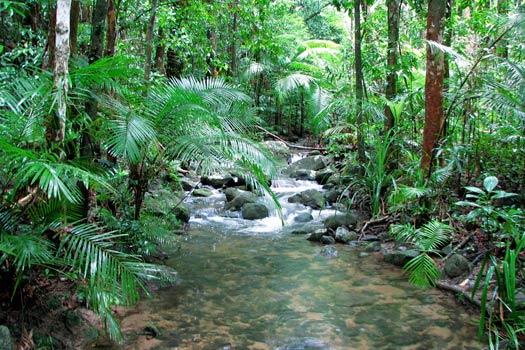 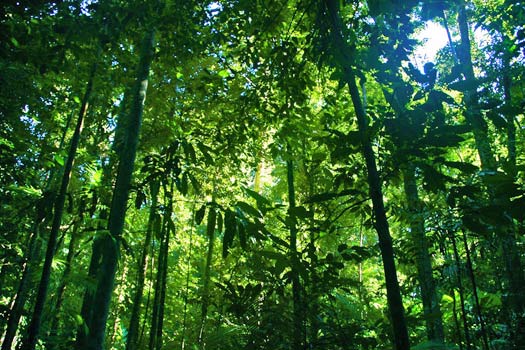 The Daintree Rainforest is the largest continuous area of tropical rainforest in Australia, growing right down to the Queensland coast.

Blessed with stunning natural beauty and impressive natural diversity, at over 160 million years old the Daintree is the world’s oldest surviving rainforest.

The forest is home to 30 per cent of Australia’s frog, reptile and marsupial species, 65 per cent of its bat and butterfly species, and many ancient plants.

Much of the Daintree is part of the Wet Tropics of Queensland World Heritage Site and extends to white sandy beaches, coral reefs, rugged mountains, gorges, flowing rivers and spectacular waterfalls. 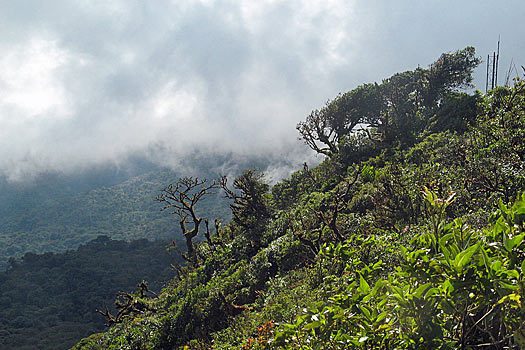 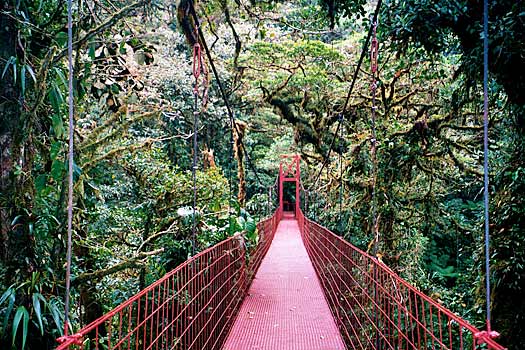 The reserve is visited by roughly 70,000 travellers every year. The forest consists of six ecological zones and over 2,500 plant species, 100 species of mammals, 400 bird species, 120 reptilian and amphibian species, and thousands of insects. It also has the largest number of orchid species in the world (more than 500).

Some of the most famous animal inhabitants include the jaguar, ocelot, Baird’s tapir, three-wattled bellbird, bare-necked umbrella bird, and the elusive quetzal. 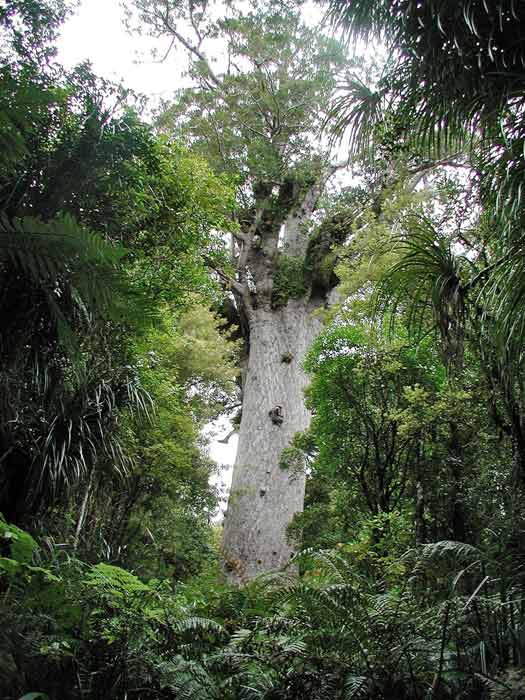 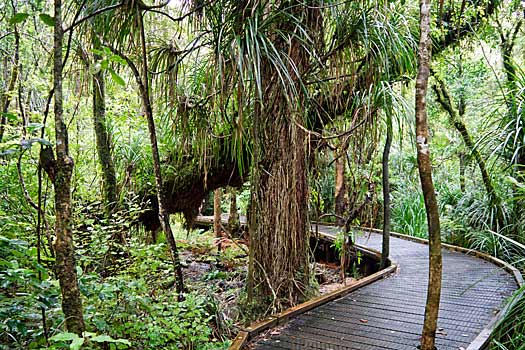 Waipoua Forest is notable for having two of the world’s largest living kauri trees, Tane Mahuta and Te Matua Ngahere, and preserving some of the best examples of kauri forest remaining in New Zealand. 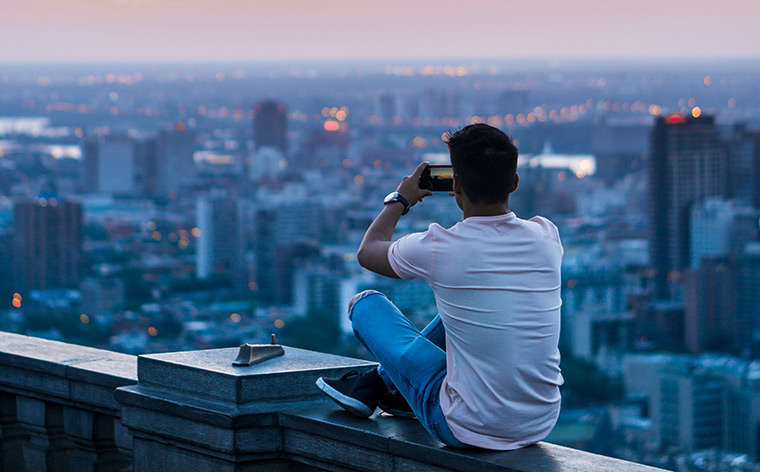 The top 10 most Instagrammed places in the world

Holiday season in Asia: our top 10 destinations to visit